A Deluge of Poison

When you read contemporary criticism of the genre, it takes an informed and primed reader to immediately dispel their false impression that the field, during that prosperous first half of the previous century, resembled the grimy, nearly dried-up pool that it is today – with one monoculture dominating the market (i.e. the run-of-the-mill thrillers crime novels you find in bookstores today). This faux representation often suggests that the genre was ruled over by a court of female writers, known as the Queens of Crime, which consisted of Agatha Christie, Dorothy L. Sayers, Ngaio Marsh and Margery Allingham. You can also earn a sparkling Lion King sticker if you namedrop Josephine Tey. 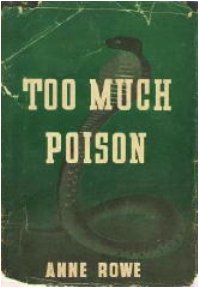 This simplistic, almost childlike, delineation of the genre is not only incorrect, but also deprecating to the myriad of published writers who were active at the time and especially to the women of this profession – who are dismissed either out of ignorance, such as Christianna Brand and Gladys Mitchell, or for having written their books on the wrong continent. It is, after all, a well-known fact that Britain was the comfy home of the literate, if slightly snobbish, puzzle-orientated mystery novel, while the Americas were the tough slummy back streets of the detective story and therefore writers such as Craig Rice and Dorothy Cameron Disney seem to have never have existed in their world at all.
This is why it's left to me, a dilettante instead of an actual scholar, to praise Anne Rowe's Too Much Poison (1944), a distinctly British mystery penned by an American woman, for its striking portrait of an unhappily married nurse, embroiled in two upper-class poisonings with snake venom, and her engaging narrative voice that continuously invites you to read one more chapter – which can also be frustrating if you're attempting to read it during one of the busiest weeks of the year!
When Mona Randolph married Dr. Harvey Carstairs, a rising Park Avenue specialist, he convinced her to keep their marriage under wraps – until he had established himself within the Manhattan social set as a physician to the rich and famous. This situation seemed to drag on interminably, while Mona acted as his secretary-nurse and furnished him with what little money she had, until her sister, Iris, married into a wealthy and well-bred family. Mona's newly acquired in-laws are not exactly charmed when they learn of her secret marriage arrangement with the young doctor and forbid Iris to see her until the Carstairs publicly acknowledge their marriage. At first, these demands seem like a blessing in disguise, to the downtrodden and neglected wife, as she can finally cash in on the interest rate of her sacrifices and take her rightful place next to her husband as Mrs. Carstairs.
But there's just one problem: her husband is involved in a serious affair with another woman, socialite Caryl Ellington, and wants to sever the ties that bind him to his common and homely wife – who had faithfully stood by his side for over three years and it takes the interference from his influential colleague and friend to make an honest woman of Mona before they each go their separate ways. During a celebrative get-together, at their home, they reveal their marriage to the world, but since this is a detective story the party is really nothing more than a prelude to murder.
First the atmosphere of this belated wedding reception is poisoned when Caryl Ellington, with her café society cronies, crash the party and followed-up with a botched suicide attempt of one of Harvey's patients, one Joyce Prentiss, who's murdered minutes later – when one of the guests introduces her to a lethal dose of poison tapped from the fangs of an exotic cobra. Enter Inspector Barry, assisted by Cliff Mallory, a renowned polo player and amateur sleuth who also moonlights as Mona's knight in shining armor, whose combined jobs consist of capturing the snake that slithered from the grassy front lawn into this party, assertively mingling with the other guests, before striking at its victim.
The most valuable asset this novel has, as I mentioned at the start of this review, is its preterite narrative, which is both inviting and lucid, however, its splendid characterization also makes it a perfect piece of counter-evidence against the claim that mystery writers from 1930-and 40s dotted on the upper classes. This story sketches a decidedly unflattering picture of the social set of the time and their cheerful, devil-may-care demeanor is nothing more than a thin veneer that gives their rather shallow existence a buoyant coating – and their petty stance against and ill-treatment of Mona Carstairs garners them no sympathy whatsoever.
So character-wise, Too Much Poison is an excellently written, in-depth story that does an above average job at bringing the people that populate its pages and their problems to live, however, it's kept from obtaining a place in the first ranks by a sloppily clued ending and a few missed opportunities. The clues are thinly spread out over two hundred and some pages and the main one isn't brought up until the second murder, which is committed with only quarter of the story left to go, and everything that could've clued you up on the motive was unfairly withhold. I also felt that more could've been done with the origin of the snake venom, which was explained in a rather off-hand manner, and the method for the public poisoning of Joyce Prentiss would've easily lend itself for an seemingly impossible situation – which certainly would have elevated the plot above that of merely avarage.
This makes Too Much Poison an excellent reading experience for fans who enjoy detective stories for their characters and past settings, without paying too much attention to the clues or be distracted by inconsistencies in the plot, but it will leave readers who want a fair shot at solving the problem themselves with a slight feeling of disappointment after they turn over the final page. In short, this novel could've been better and it could've been worse, but I still think it's worthy of our attention – if only for the characters.
I scribbled this review in haste, as it's the last one of this year and time hasn't been entirely on my side, but I hope the amount of mistakes has been kept at a minimum and hope to welcome you all back in the new year – and wish you all the best during those dozen months that make up 2012!
Anne Rowe's bibliography:
Curiosity Killed a Cat (1941)
The Little Dog Barked (1943)
Too Much Poison (1944)
Up to the Hilt (1945)
Fatal Purchase (1945)
Deadly Intent (1946)
Geplaatst door TomCat on 12/30/2011