The Ghost in His Name

During the early 1940s, Craig Rice, Queen of the Screwball Mystery, collaborated as a scenarist on The Falcon movies, which starred actor George Sanders as a debonair gentleman detective with an appreciation for the female form, and from this pool of creative consciousness eventually sprang Crime on My Hands (1944) – a lighthearted detective romp in which George Sanders takes it upon himself to clear-up a number of fatal shootings on the set of an action-packed Western. 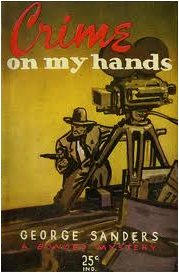 The name that was printed on the front cover and across the title page of this book was that of George Sanders, but there was, at least, one silent partner, working behind the scenes of this project, who did most, if not all, of the work. Craig Rice was the ghost in the typewriter, however, it's unclear if Cleve Cartmill, who seems to have strayed from his usual haunts, science-fiction and fantasy, to help her pen this facetious detective novel. But then again, it's not entirely impossible, either, and his part could've been limited to lending his expertise, as a science-fiction writer, to help her with the technical details on one of George Sanders' inventions – which he rigged up in order to trap the killer. It proved to be unsuccessful enterprise.
Crime on My Hands opens with a sneak-peek at George Sanders at work, as he shoots one of the final scenes for his latest movie, Die by Night, in which he plays the role of a self-assured, philandering amateur sleuth to perfection, but the thespian has grown tired of always playing the detective.

"The vogue is for the light-hearted playboy with a butter heart and iridium brain to become involved in a murder situation. Now the audience knows that I, as the amateur detective, am going to triumph in the end. There's no suspense, except of an intellectual nature. The melodramatic action seeks to cover that dramatic fault, but I know suspense is lacking. I can't be wholehearted about it when I know that I will win, no matter what."

Fortunately, for him, he had to foresight to hire a clever and competent business agent, Melva Lonigan, to look after his professional interests and she managed to procure a contract in his name for the lead role in Seven Dreams – a fast-paced, action-filled Western fraught with danger and romance set against the backdrop of a barren, sun blasted desert landscape. Unfortunately, for him, this change of pace and setting is short-lived, as he, once again, finds himself hunched over the sprawled, blood-spattered remains of an extra, in the middle of a circle of wagons, but this time the cameras aren't rolling and the microphones are turned-off – and our on-screen gumshoe quickly notices that movie villains are nothing like their the real-life counterparts.
This murderer, for example, neglected to lither the scene of the crime with incriminating evidence for him to glance at and mutter cryptic remarks. As a matter of fact, this evasive gunman even expunged the few tell-tale clues, such as a film can protecting the undeveloped scene of the fatal shooting and a pair of silver handled revolvers, which our self-styled amateur sleuth had to go on. Not a good sport at all.
What I found interesting, whilst reading this book, was how well Rice had obliterated nearly every trace that could identify her as its author. There are still one or two sequences in this book that bear a partial finger print of her style, such as filming a scene in an artificially created sand storm, in which Sanders seems to be confronted with his shadowy adversary, and the parade of suspects who came tramping into his cabin during a botched attempt at entrapping the gunslinger, but, all in all, this is not a detective story that conformed to her usual style.
In a way, this is also quite amusing, if you take into consideration that the authorship of Gypsy Rose Lee's The G-String Murders (1941) and Mother Finds a Body (1942) were ascribed to her. I have only read the latter, but I immediately understood why people found it so easy to believe that they were penned by Rice – since they were covered with, what appeared to be, her fingerprints. There was a whiff of surrealism that emanated from the pages, the three main characters formed a unity (all but one of Rice's series detectives are team players) and the zaniness was vintage Ricean.
Lee's authorship of The G-String Murders and Mother Finds a Body has now been established and they were probably put down on paper with Rice's style and plotting technique in mind – which simply explains how a not entirely untalented amateur could equal the best efforts of a professional. Crime on My Hands also reinforces this claim, in a topsy-turvy way. Why would she ghost one book in her own, unique and easily identifiable style and cleverly disguise the other. I mean, if I wouldn't know any better and was asked to hazard a guess, as to who ghosted this book for George Sanders, the closest I would get to hitting the mark would be blurting out Stuart Palmer's name – on the fourth or fifth guess.
On a whole, Crime on My Hands is an OK story of crime and detection, but a must-read for fans that prefer their sleuths at their most amateurish and face their perils and brave their dangers in an upbeat manner – with a roguish grin plastered across their face. It's just plain fun, even if the track to the solution runs along a badly maintained railway line. But that shouldn't impair the fun derived from the overall story. The Rue Morgue Press should definitely take a look at this one for their catalogue.
There's a second detective novel that bore the name of George Sanders on its cover, Stranger at Home (1946), but this one was from the hand of Leigh Brackett – a writer primarily known for her science-fiction and screen writing. But contrary to its, more well-known, predecessor, this book is actually still in print and one that I will probably take a look at in the upcoming year.
Geplaatst door TomCat on 12/22/2011