"Take me away, far, far from Thebes,
quickly, cast me away, my friends—
this great murderous ruin, this man cursed to heaven,
the man the deathless gods hate most of all!”
– Oedipus

Over the summer, I reviewed Moord op het eindexamen (Murder During the Final Exams, 1957), an proficiently plotted and intelligently written detective story set at a small-town gymnasium during a hectic and enervating exam period, which was partly extracted from real-life – since the author himself was an educator. Tjalling Dix was the nom de plume of Libbe van der Wal, a well-regarded professor and former rector at a gymnasium in Delft, who probably escaped from the pages of a Michael Innes novel, but you have to read my previous examination of his work if you want to be formerly introduced to this delightful don. 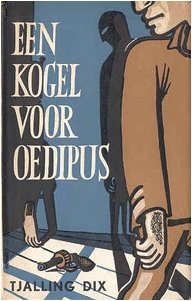 Een kogel voor Oedipus (A Bullet for Oedipus, 1954) was the first of only two detective novels to appear from the hand of Van der Wal and the backdrop for this one, instead of the buzzing teachers lounge and the austere classrooms, is a perturbed theatre company, Het Grote Toneel (The Grand Theatre), whose members are united only in their common hatred for their director and lead player.
Gustaaf de Waeles was a gifted and accomplished actor, but he was also a vulgarian at heart who took up blackmail as a leisure entertainment.
As a manipulative oppressor, who made a sport out of slithering in between the bed sheets of any woman he found even remotely attractive and resorted to extortion if people didn't comply with his wishes, De Waeles was unrivaled. Needless to say, this thespian will not be as successful in drawing tears at his own funeral as he drew people when he took the stage, but then again, that can be considered as a trifling matter if you bowed out with a bullet wound in your head – and your murderer dressed up your final performance as an un-theatrical suicide. Heck, he even took his last bow off-stage!
During the intermission of Sophocles' tragedy Oedipus the King, the main attraction of The Grand Theatre is all of a sudden taken ill, claiming to be unable to stumble back on stage, he heads back home. For the second act, the role of Oedipus was played by De Waeles' personal substitute, who was unable to sustain the quality of acting of their lead man and the play was somewhat of a bust, but this was made up, for them anyway, when they heard that the illness was probably due to a case of acute compunction – which prompted him to take his own life!
The body of the actor was found in his own living room, unceremoniously slumped on a sofa in a dark corner of the room with a revolver, that seems to have slumped from the dead man's hand, on the floor, but it's the inartistic nature of this suicide that awakens a deep suspicion within the theatre-loving Inspector Joris de Corthe. De Corthe's theory that the man was shot is not very popular with his superior, who prefers a simple suicide over a complicated homicide, but the story that the silent witnesses have to tell him, ranging from a pair of clean shoes and broken coffee cups, slowly, but surely, convince him that his inspector might be on to something.
I can understand why this book was well received by the critics, whom, especially over here, have not always been patrons of the classical whodunit novel, on the contrary, but they must have fallen for Dix's characterization – which was described by one reviewer at the time as follow, "...can put people on paper, roughly sketched, but always on the on-the-mark and life-like." It probably also helped a lot that most of the characters carried emotional baggage from the war with them, a popular subject in Dutch literature, as they refer to family members who died during those dreadful years and one of them is even a political delinquent – who was recently released from jail after serving a term in prison for collaborating with the Germans.
Plot-wise, this book also deserves praise for its simple, but nonetheless clever, construction, even though a lot of the conventions seem to have been culled from the pages of detective stories that were penned during the 1910s, as nearly all of the suspects were trudging around in the murder room, one after another, before the police were finally brought in, which resulted in one or two clues being dropped. However, in this case it added some considerable charm to the story and minor quibble measured against the overall quality of the story.
There were clues, some better than others, such as the brilliant hint of the broken coffee cups, that did an excellent job at both telling you the truth as well as directing your attention away from the obvious culprit – and make you rethink your position and isn't that what a good detective story is suppose to do? The only thing I can hold against this book is that it didn't came alive in the same way that its successor did, which, I think, can be ascribe to the fact that everything in this story took place off-stage and was focused completely on the characters and plot. He simply neglected to turn the theatre into a stage for this story, but, as I noted before, this is a lesson he learned from and was not repeated in his next novel.
Overall, this is another competently written and cleverly constructed detective story from a writer who, sadly, only penned two of them and is all but forgotten today. A revival in his native country seems unlikely, but perhaps, one day, his work can be introduced to a more appreciative, English-reading audience. Hey, we can hope!
On a final note, I would probably murder indiscriminately in order to take a peek at the drafts/notes of his two detective stories (that is, if they exist), because I suspect that both were originally envisioned as full-fledge locked room mysteries, but something kept him from doing it. It could be that coming up with a good and original solution was a lot harder than he anticipated or that his publisher rejected it as unfeasible, but the crime-scenes in both novels were a bolt away from becoming sealed rooms.
Other Dutch mysteries discussed on this blog: