Last month, I reviewed The Further Misadventures of Ellery Queen (2020), edited by Josh Pachter and Dale C. Andrews, which is the second anthology of parodies, pastiches and homages celebrating the personification of the American detective story, "Ellery Queen" – shared pseudonym of the mystery writing cousins, Frederic Dannay and Manfred B. Lee. Rex Stout's elephantine sleuth and his right-hand man were honored in a similar themed anthology, The Misadventures of Nero Wolfe (2020). I ended my review with the observation that there's another well-known, American mystery novelist, namely S.S. van Dine, who should have enough material related to him to compile The Misadventures of Philo Vance. 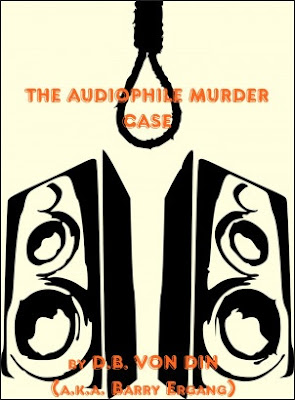 I know genre satirist, Jon L. Breen, wrote three pastiches, "The Austin Murder Case" (1967), "The Vanity Murder Case" (1970) and "The Circle Murder Case" (1972). "The Pinke Murder Case" by N.O.T. von Dime, collected in The Mixture As Before (1930), is an early parody of Van Dine and Vance (have not read it), while Ashibe Taku's "Taikun satsujin jiken" ("The Tycoon Murder Case," 2000) is a slightly more recent take on the Van Dinean detective story. There was a 1940s radio serial based on the characters, entitled Philo Vance, which probably has one or two scripts with interesting enough plots to include (e.g. "The Deathless Murder Case," 1949). Curt Evans wrote an amusing blog-post in 2018, "Philo in the Fifties," in which he speculates (tongue-in-cheek) "what Van Dine might have written had he lived, like Chandler, into the next two decades." An anthology like that can easily be "padded" out with the inclusion of John Riddle's obscure, long out-of-print and novel-length The John Riddell Murder Case: A Philo Vance Parody (1930). I think a lot of readers would appreciate it more than brief excerpts from larger works.

I'm sure there are more than enough short parodies, pastiches and homages to fill out an anthology. Serendipitously, I stumbled across one such parody/pastiche that turned out to be a pleasant surprised.

Barry Ergang is the former editor of Futures Mystery Anthology Magazine, winner of the Derringer Award and short story writer who penned the locked room mystery "The Play of Light and Shadow" (2004) and the short-short parody "Gideon Fell, Hardboiled Sawbones" (2003) – based on a comment by our very own Nick Fuller on the old GAD Yahoo group. During the first months of 1980, Ergang began working on pastiche that parodied both Van Dine's Philo Vance and the audio industry at the time. The story was titled "The Audiophile Murder Case" and was submitted was submitted and turned down by various mainstream hi-fi magazines, because the editors likely had a problem with the story's "less-than-charitable takes toward certain aspects of the industry" as well as "the possibility that some equipment manufacturers would be offended" and "thus cease purchasing advertisements." So a few years went by before the story was picked up by J. Gordon Holt, editor and reviewer of Stereophile, who began serializing the story in October, 1982.

Unfortunately, the story didn't make it into print quite like Ergang had envisioned it. This oversight was only rectified in 2019 when Ergang published a restored version of "The Audiophile Murder Case" as it was originally intended to be published. Surprisingly, it turned out to be a locked room mystery! So put on some synthwave as we go back to the '80s!

Winderley "Golden Ear" Manner was the editor, publisher and principle reviewer for Semper Fidelis, "a so-called "underground" audiophile journal," whose readers took his reviews as gospel. So he wielded the power to "virtually make or break a manufacturer," which went to his head and became "more and more authoritarian" as he gained subscribers and a reputation. This didn't made him very popular with manufacturers and retailers.

Manner occasionally invites people to his penthouse floor of a high-rise, New York apartment building to participate in a listening panel in his soundproof listening room. There were several people on the day of his murder who received such an invitation, Jason Linderman, Addison R. Corman and Selwyn Ericson. All of them work in the audio industry and all have an ax to grind with the editor/reviewer of Semper Fidelis, but, when they arrive at his penthouse, the door to the listening room is closed and apparently locked on the inside – which had to be removed from its hinges. Inside they discover Manner's body, gagged and wrists tied with copper wire, hanging from a noose with headphones on. Fortunately, that's the moment Manner's fourth guest arrives on the scene, Milo Rance. Besides being a detective extraordinaire, Rance has an ear tailored for "the niceties of sonic accuracy" (Manner "once asserted that Rance's ear was second only to his"). Now he has to figure who silenced Gold Ear in a locked room filled with amplifiers, turntables, tape decks and speakers.

I've to compliment Ergang here for how handled the locked room problem. When I learned the door was not locked, or bolted, but secured with a drop-latch, I was a little disappointed. The drop-latch suggested an obvious trick, under the circumstances, but Rance inspects the drop-latch ("swung like a pendulum") and concludes "the latch is too loose to have stayed poised until the door closes." So it could "not have been maneuvered into place" and "allowed to drop from vibration when the door was shut." The actual locked room-trick is a 1980s update of the kind of locked room trickery Van Dine was up to in his own novels, but the who-and why also hid a few genuine surprises. Mostly that the story gives the reader two different answers to those questions. The official solution is perfectly in line with the (neo) traditional detective story, but the ending suggested a second, unexpected, but actually foreshadowed, solution with an undeniably original motive attached to it. And that's what elevated "The Audiophile Murder Case" above the status of a mere pastiche or parody.

So, yes, Ergang's "The Audiophile Murder Case" was an unexpected, but welcome, discovery, which succeeded in parodying Philo Vance, but with a good enough plot to make it stand on its own as a detective story. The locked room angle was just the icing on the cake. Just one question. Where are the footnotes, Barry? You forgot the footnotes! Why did you forget the footnotes? The story is still incomplete without them!

Notes for the curious: I previously reviewed two other locked room mysteries set among audiophiles and manufacturers. Herbert Resnicow's The Dead Room (1987) and Motohiro Katou's "Glass Room" from Q.E.D. vol. 15.