Two years ago, James Scott Byrnside completed his Rowan Manory and Walter Williams trilogy, Goodnight Irene (2018), The Opening Night Murders (2019) and The Strange Case of the Barrington Hills Vampire (2020), which in turn performed an amazing hat trick – back-to-back gems of traditionally-plotted, slightly noir-ish, detective novels. Stories brimming with bizarre and sometimes gruesome murders, locked room mysteries, dying messages and false-solutions that can only be compared to the works of Byrnside's Japanese counterparts of the shin honkaku school or Paul Halter at the top of his game. Regrettably, Byrnside is currently the only writer in the Western world who's crafting these kind of ambitious, tightly-plotted and fairly clued detective novels commonly associated today with the East. So it was a joy when his fourth novel was finally published late last year! 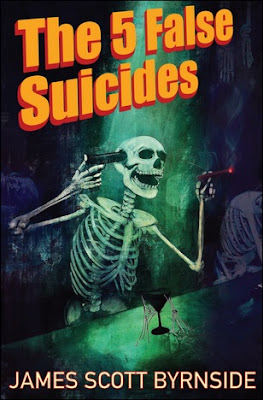 The 5 False Suicides (2021) has a title and premise that immediately invites the reader to draw comparisons with John Dickson Carr's The Four False Weapons (1937) and The Case of the Constant Suicides (1941), Agatha Christie's And Then There Were None (1939) and Peter Lovesey's Bloodhounds (1996). This is not that kind of (locked room) mystery novel. The 5 False Suicides is "some stand-alone, crazy-ass piece of pulp" dedicated to Fredric Brown, which should give you an idea what to expect. Or so you would think!

The 5 False Suicides takes place in 1947 New Sweden, Maine, where librarian Gretta Grahame formed a book club, the Murder-mystery Appreciation Society of New Sweden (MASONS), on the recommendation of her therapist to combat her shyness. Gretta becomes "incredibly communicative" whenever she gets to talk about the intricacies of the detective story. So why not use it to her advantage. The first two members to join the MASONS were Gretta's only real friends, Faye Withers and Georgie Danvers, but an advert on Gretta's library's whisper wall drew five more members into the group – two couples and a single. Olive Tennant is the daughter of a local toothpick mogul and joined up with her husband, Harry, in addition to an elderly couple of retirees, Tom and Alice Mower. The single is a strongly opinionated hotel porter, Oscar Strom. One of their weekly meetings fills out the first chapter as they kindly bicker and banter about what to read next and picking apart Oscar's homespun impossible crime method, which pleasantly reminded me of the after-dinner discussions from Isaac Asimov's Black Widower series. A chapter ending with the ominous promise that "most of the membership would be dead in a fortnight" and "one of the members would be a murderer."

A long string of tragic deaths that began with Gretta's estranged uncle, Scotty Grahame, calling his niece to inform that her Aunt Suzie died from an overdose of barbiturates and the police ruled it a suicide. A similar fate befell Gretta's mother and she recently tried to take her own life, which apparently runs in the family. But not without a reason.

Scotty tells Gretta that her grandfather, Andrew Grahame, put "a curse on his own flesh and blood," back in 1907, which "has been murdering the Grahame family for the last thirty years" and they're the last two remaining Grahames – very likely next to fall victim of the curse. Andrew Grahame had help with his curse from a Hungarian mystic, or male-witch, named Boroqe Rieszak and he wants to help them lift the deadly curse. So he asks Gretta to come to his hotel room and drive together to the meet the Hungarian witch, but, when she calls back the next day, a policeman answers the phone. Scotty had committed suicide in his hotel room!

Nonetheless, Gretta decides to go through with meeting Rieszak, accompanied by Faye and Olive, who reveals their family and curse is tied to Blood Island. An island on the south coast of Maine connected to the mainland by a natural, limestone bridge and had been cleared in 1825 of its native population to make way for "a heavenly getaway for the wealthy," but one remained behind and hid in the island forest to plot his revenge. And massacred "the best of society" on their first night on the island. So the Indian was hunted down and he cursed his hunters, "may your loved ones suffer the same fate as I," before slitting his own throat. Gretta's grandfather was a Satanist and used to island curse to ensure that a special place in hell reserved for "those who curse their own flesh and blood," but, "when only one descendent of a Soctomah-cursed family remains," that "descendent can be freed of suicide by a ceremony." All Gretta has to do is gather a surrogate family to temporarily replace what she has lost and go to Blood Island, now called Heaven's Gate, to perform the ceremony. This is where the story moves from Carr-Christie territory to the borderlands of Hake Talbot and Theodore Roscoe. 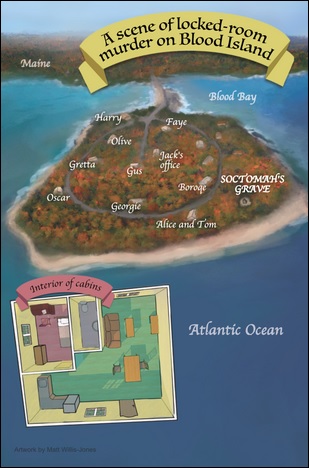 Normally, it's "darn-near impossible to get a reservation on Heaven's Gate" at that time of year, but a wildfire is slowly consuming the south of Maine and a serial killer, "The Burlington Butcher," is likely hiding out in the dense forests of Heaven's Gate – who left a bizarre murder scene on the southernmost beach. A young woman had been butchered with a hunting knife, but "no footprints except those of the victim were found on the beach." So the island was not a particular popular holiday destination that seasons. Gretta goes to the island with Rieszak and some of the MASONS as her surrogate family, but they have hardly arrived before one of them apparently shoots and kills themselves in a cabin with the windows and door locked from the inside. Through the window, they saw the handle of the key sticking out of the keyhole. At the same time, someone else is found hanging from a noose with a mutilated hand. And then, as you can expect from the title, the story really begins to pick up pace.

Before getting to the plot crammed with impossible crimes, red herrings and false-solutions, the wonderfully executed, sometimes dark duality and meta-consciousness of the storytelling has to be highlighted with the MASONS almost being aware they're characters inside a detective story. They disapprove of the case possibly having more than one, independently, moving parts ("I don't like a mystery with too many moving parts") or having the sneaking suspicion they have “already come across the big clue” without having noticed it. So, under normal circumstances, people who prefer the "civilized murder" of fiction to the messy banality of real-life crimes, but, as Detective Brodsky put it so eloquently, "it ain't like those books by Dick Johnson Carter." This resulted in awkward, but very well handled, scene in which the MASONS tell Jack Munt, Ranger of Heaven's Gate, how intrigued and excited they were about his impossible murder on the beach. Munt responds with telling them the girl didn't die right away and how held her hand as she died. So, no, he wouldn't exactly describe the murder as exciting or funny. Even though the characters run around the island, simultaneously playing detective and getting culled, the story becomes quite grim as it nears its conclusion. Sometimes bordering on outright horror ("Gur fxva unq ohooyrq hc naq jnf abj orersg bs nal qrsvavat sbez pnhfrq ol nqurfvba gb gur obar"). Just like the second, gory murder from Goodnight Irene or the severed hands featured in The Strange Case of the Barrington Hills Vampire, there's a logical reason for everything in Byrnside's mysteries. This time, it has all the mad logic of dream.

Firstly, there's the locked room-tricks, real and false, which are contracted around principles that have been around for a while, but how they were presented and executed put a new spin on them – which is the next best thing to discovering an original and brand new locked room-trick. I liked how one of the tricks suggested was an updated version of a trick from a fictitious short story, "Five Deaths and One Lock," which surprised readers in 1889 as "they had no idea what [REDACTED] meant." But where The 5 False Suicides stands out is not as a locked room mystery with multiple impossibilities. But how all the moving parts and red herrings came together. And how they were pulled apart again. Planting "the big clue" in plain sight. Blurring the lines between the real and false-solutions culminating in that daring, uncertain, but ambitious ending. Something not every mystery reader is going to appreciate, but you have to keep in mind that this is supposed to be a pulp-style mystery in the spirit of Gerald Verner's The Royal Flush Murders (1948) and John Russell Fearn's The Man Who Was Not (2005) with a distinct touch of madness. I'm very fond of those two second-string pulp mongers. So add in a first-rate plot stuffed with fairly planted clues, treacherous red herring and false-solutions, you leave me with precious little to complain or nitpick about.

Sure, The 5 False Suicides is perhaps too short a novel with characterization taking a backseat to the plot and storytelling. I can see how readers who like characterization would have appreciated a little more elaboration about certain character revelations. But speaking as an uncouth, plot obsessed detective fanboy with a taste for the pulps, the lack of characterization didn't bother me too much. To quote the great Dr. Gideon Fell, "I like some vividness of colour and imagination flashing out of my plot, since I cannot find a story enthralling solely on the grounds that it sounds as though it might really have happened." I do not care to hear the hum of everyday life and neither does the author of this crazy-ass piece of pulp.

Byrnside only began to seriously read Golden Age detective fiction in early 2017, published his first detective novel in 2018 and continued to demonstrate the kind of genre awareness and understanding in his next two novels that I always assumed took years to develop and fine-tune. More importantly, Byrnside's four novels demonstrate how you can enrich your stories and plots by building on the rich history of your genre instead of discarding it as out-of-date and obsolete. A genuine prodigy of the genre and The 5 False Suicides carried on the streak of delivering quality, first-class detective fiction that fans and genre scholars of the future might look back upon as the dawn of a Second Golden Age (once again, no pressure). So you future detective fans and scholars better be grateful for having all of his novels at your immediate disposal. We had to wait years for The Jolly Roger Murders, Time Seals All Rooms and Goodmorning Irene to come out.