Alan Thomas was a British barrister, literary editor and mystery writer who wrote sixteen, largely forgotten, novels of detection and criminal intent, but his seminal novel, The Death of Laurence Vining (1928), is the stuff of legends – an extremely rare locked room mystery that turned the detective story on its head. An elusive novel reputed to be "a minor classic" with "an ingeniously thought out impossible crime" and an original spin on Sherlock Holmes and Dr. Watson! 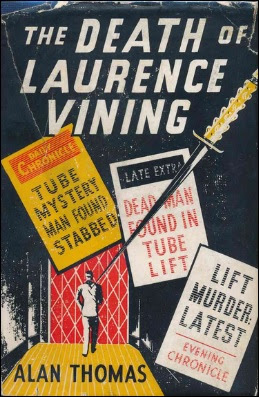 However, you're advised not to read the book expecting to find a completely tongue-in-cheek treatment, similar to Leo Bruce and Takemaru Abiko, of the classic detective story. The Death of Laurence Vining could have been written by Anthony Berkeley when he was in a particular foul mood. This probably explains why such a brilliant detective story has not been reprinted in nearly seven decades. But more on that later.

Laurence Vining was a genius as well as "a queer fish" of independent means, which both allowed him to devote his mind to the pursuit of knowledge, but whether his study of man bolstered his humanity "is open to grave doubt." An arrogant and difficult man who didn't have much sympathy, or liking, for his fellow creatures and wasn't afraid of giving offense in a "devilish polite" and sarcastic manner – which earned him more enemies than friends. Only person who seemed to understood and even appreciated him was his "very impressionable" friend, Dr. Benjamin Willing, who became Vining's Dr. Watson when he began developing an interest in criminology. And on more than one occasion, Vining had succeeded where the police had failed.

The Death of Laurence Vining opens with the last chapter in a sensational murder trial, referred to in the newspapers as the "Shop Murder" or "Shop Case," in which Vining delivered the murderer of shopkeeper to justice. A success that came at a personal price. The case ended Vining's role as an anonymous, unofficial consultant to the police and the papers wrote jubilantly about the eminent scholar abandoning his studies "in order to assist in work of this kind." Scotland Yard had a real-life Sherlock Holmes!

So a shock wave goes through the country and newspaper headlines when Vining is killed under circumstances defying any logical or even natural explanation.

A ticket collector at the top platform of Hyde Park Tube Station witnessed Vining entering an empty lift, save and sound, but, when the lift had reached the bottom, the doors opened to reveal the body of the briefly famous detective – a ceremonial dagger had been planted in his back. But how did the murderer enter the lift without being seen by the tick collector or managed to escape with the two people waiting at the bottom? Dr. Willing offers his assistance to the exasperated Inspector Widgeon, of Scotland Yard, to help find the murderer of his friend. An apparently invisible murder or the possibility of a sentient dagger aren't the only complications in the case. 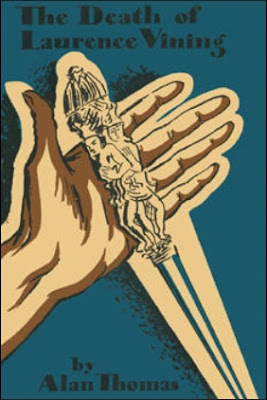 Vining young, devil-may-care nephew, Captain Jack Ransome, who wanted to marry his uncle's secretary, Pamela Jackson, but disappeared shortly after his uncle threatened to disinherit him. Suleiman, Vining's Malayan servant, disappeared around the same time and, if he turned on his master, the motive could be hidden among the many oriental treasures crammed inside his museum-like house. Who's behind the mysterious letter, signed "Red Hat," which lured Vining to the tube station? On top of that, Widgeon often has to drag answers from various suspects and witnesses.

However, the investigation that takes up the middle portion of the story is surprisingly plain and straightforward for, what legitimately is, one of the best detective novels of the 1920s. A routine investigation that's taken up with questioning witnesses, examining the scene of the crime and digging around for the clues with the only notable highlight being a preposterous, pulp-style false solution proposed by Dr. Willing to explain how Vining could have been stabbed in sealed and moving lift. You have the chalk the middle portion up as the calm before the storm, because the eventual solution is one that hits all three cylinders – who, why and how. The locked room-trick is meticulously put together and the nature of the trick, as well as the ideas it used, foreshadowed what was to come in the decades ahead. Even more impressive is that the murderer accounted for several possibilities and had prepared according with several backup plans. One of them would have aborted the whole scheme, if outside elements started working against it. Something I've never seen before!

I had both my suspicions and doubts about the murderer's identity, because the locked room is not all that easy to work out and the motive kind of stumped me, but the choice of murderer and the twisted motive were unquestionably masterstrokes. Thomas was not satisfied and went one step further in the unusual confrontation with the murderer, which resulted in exactly the kind of ending I've always wanted to see in a genuinely classic detective novel. Thomas gave it to me.

So why has this minor classic and herald of what was to come in the 1930s not been reprinted since the 1950s? I got my answer when Vining's housekeeper gave her opinion on Suleiman using a hard R that you can hear rolling off the page and that's not only time The Death of Laurence Vining showed its age in a less than flattering way. So you'll be hard pressed to find a publisher today who would be willing to reprint it and very likely will remain out-of-print until it enters the public domain.

Yeah, The Death of Laurence Vining definitely lived up to its mythical reputation among locked room readers as an obscure masterpiece and, if you're willing to take the good with the bad, you'll be treated to a brilliant, innovative and cleverly subversive detective story worthy of Anthony Berkeley.
Geplaatst door TomCat on 9/02/2020