Sleightly Lethal (1986) by Patrick A. Kelley

Patrick A. Kelley is, or was, an American magician from Altoona, Pennsylvania, who performed magic tricks at banquets and children's parties in the 1970s, but I had to dig deep to find that obscure, biographical detail in the internet archive of the Altoona Mirror – advertising as "Magician Entertainment" in the August 11, 1975, edition. Ten years later, Kelley had gone from doing magic tricks at children's parties to writing detective novels about a down-on-his-luck magician, Harry Colderwood. 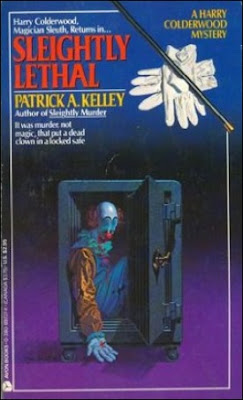 During a brief period between 1985 and 1988, Kelley wrote a handful of detective novels that all have "sleightly" in their title, beginning with Sleightly Murder (1985), but these books have done very little to immortalize his name.

I stumbled across the series by pure chance! You can only find most of the book covers and a list of titles online, but barely anything about their content or any reviews with exception of a 2014 interview, "Getting to Know Tracy Revels," in which Revels names Harry Colderwood as one of her favorite detective-characters – praising the books as "really clever." So, the Colderwood series is surprisingly obscure considering it was published relatively recently and had a magician-detective as its protagonist. A normally popular figure in the traditional detective story.

So the series was probably garbage, I reasoned, but the book covers were very close in style to those of another, 1980s writer of traditional, puzzle-oriented detective novels, Herbert Resnicow (see The Gold Deadline, 1984). Some of the titles and capsule plot-descriptions suggested they could be impossible crime novels not listed in either Robert Adey's Locked Room Murders (1991) or Brian Skupin's Locked Room Murders: Supplement (2019). Sleightly Invisible (1986) is the most obvious example with the usual shenanigans during a séance, but the title that caught my eye was Sleightly Lethal (1986). A book with an intriguing cover showing a clown stuffed into a safe and telling the reader "it was murder, not magic, that put a dead clown in a locked safe."

Sleightly Lethal is listed online as the third title in the series, but it could just as well be the second title, because Kelley wrote two Harry Colderwood mysteries in 1986, paperback originals, and my edition only gives Sleightly Murder under "other Avon books by." No mention of Sleightly Invisible. Anyway...

Just five years ago, Harry Colderwood was a relatively successful magician, but the graph of his career "shows a steady downhill trend" and had the graph been a cardiogram, he would have been "legally dead" two years ago – a nasty rumor has it he's now doing trade shows! A poor man's Alexander Blacke who travels the country in a ramshackle van loaded with magic tricks that are starting to break down. But when he sees an old friend on TV making a dire prediction, he races with the van to an old, magic-themed hotel in Roselle, Maryland.

Marcus Spillman is known to the world as Quimp the Clown and Colderwood catches an interview with him on television, in which he says to have no believe in psychics and fortune-tellers, but predicts that "Quimp is not long for this world" and he won't be checking out of the Fitch Hotel alive. Somebody is planning to do away with him!

Fitch Hotel is owned by Jack O'Connell, "a magic-lover," who turned the hotel into "a gathering place for magicians" overflowing with conjurers "pulling bouquets from nowhere, finding chosen cards" and "burning and restoring borrowed handkerchiefs." The Fitch is a never-ending magic convention and, once a year, the hotel hosts Magicade and Quimp holds the record for the most consecutive Magicade engagements, which is "the magic world's equivalent of an Oscar nomination." Unfortunately, the municipal council has condemned the whole block without exception and the hotel is in the process of closing down.

Colderwood arrives three days after the last Magicade at a partially closed and practically empty hotel, surrounded by torn down buildings, but just in time to be there when the hotel-safe is opened to reveal the body of a clown – crammed into the safe so tightly that knees touched chin. A clown who looks like the spitting image of Quimp. However, Marcus Spillman is very much alive and he has four people with him, dressed and made up as his clown persona, who are competing to become the next Quimp. So who was the clown in the safe? The dead man is identified as "a local punk," Perry Vaughn, but Sheriff Virgil Tarrant believes Vaughn had accidentally locked himself inside the safe during a botched burglary. Just one of those bizarre accidents under peculiar circumstances. Colderwood disagrees.

So, once again, the poor magician turns amateur detective and begins to poke around with an empty hotel and a clowning competition as a background, but a background with some complications.

One of the competitors is his former assistance and love-interest, Cate Fleming, who's the only person Colderwood trusted "to fire a .537 Magnum" in his face. But she's married now. Colderwood is also entangled in a friendly game of catch-me-if-you-can with a special field agent of the IRS, Jeffers, specialized in "tracking down hard-to-find citizens" and "serving them with audit notices." The so-called treasure room of the Fitch and a local serial murderer, christened The Soda Pop Killer, lurking in the background complete the mise-en-scène of the story.

The treasure room of the Fitch is a basement storage room filled with memorabilia and souvenirs left behind by magicians, which had become a tradition over the decades ("visit the Fitch and leave a piece") and the collection had become to big to keep on permanent display. I liked the scenes in which Colderwood was rummaging through the storage room, trying to figure out The Great Halsto's Mystic Box or watching a 1930s film reel of a comedy drunk-act, but particular appreciated when he came across a photo-album of the first Magicade and a picture of a famous Dutch magician, Fred Kaps – who's "pouring buckets of salt from an invisible shaker." His trademark trick!

Sleightly Lethal is a very specific, but kind of hard to describe, type of quasi pop-culture inspired mystery novel, often taking place during a convention, which were apparently popular during the 1980s. The story has a very similar feel to it as Bill Pronzini's Hoodwink (1981), Richard Purtill's Murdercon (1982) Sharyn McCrumb's Bimbos of the Death Sun (1987), Richard A. Lupoff's The Comic Book Killer (1989) and Daniel Stashower's Elephants in the Distance (1989). I'm sure there are more.

However, Sleightly Lethal is not quite as good as some of its contemporaries and you blame that on how the plot-threads and clues were handled. Admittedly, the central idea with the dead clown in the safe was clever and somewhat original, especially how it played out, but the reader can't really piece it all together with the clues that were provided. And this took the punch out of the ending. So not exactly an example of the blazing surprise ending that makes the reader suddenly see the whole design.

I was slightly disappointed with the conclusion, lack of an impossible crime and that the story gave me no opportunity to shoehorn in a "Doink brah, you makin' kids cry, brah" reference, but Sleightly Lethal was still a fun and entertaining read. So I'll eturn to the series to see what Sleightly Invisible and Sleightly Deceived (1987) have to offer. Or what that extremely obscure, final novel, Sleightly Guilty (1988), is about.
Geplaatst door TomCat on 3/22/2020