A Shelter from a Rainy Past

"Gave it all that I got
And started to knock
Shouted for someone
To open the lock
I just gotta get through the door."
- Gotta Knock a Little Harder.

Continuing my Anthony Gilbert reading binge, I snatched up a copy of Death at the Door (1944), which was originally published in the United Kingdom under the title He Came by Night, after coming across a micro synopsis that teased this novel as a locked room mystery. There's a bolted and barricaded door hampering an easy entrance into an hermitically sealed room, harboring the remains of a murdered man, but this one deviates from those put to use in the books by locked room artisans such as John Dickson Carr and Joseph Commings. But I am ahead of the story here. 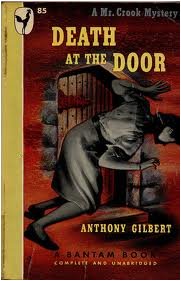 This tale embarks at dusk, when Tom Grigg wanders into Mereshire, a picture-postcard example of the quiet beauty of the countryside that appears to be impervious to the march and progress of time, after an absence that stretched out for an entire generation – and the first person he drops in on is not exactly overcome by joyous emotions at the sight of his face. Tom Grigg is not someone who often receives invitations to family reunions and his motivation for coming back, after more than thirty years, has very little to do with nostalgic reasons and a lot with a murder charge that is looming over his head in the shape of a hangman's noose.

He demands from his auntie, a doting grandmother type named Mary Anna Manners, to accommodate him, but since relinquishing a room under her own roof to a fugitive of the law is out of the question she surreptitiously sneaks him into an abandoned, dilapidated church – which has a reputation of being haunted. Theoretically, he should've been as safe there as if he was hiding in the attic or basement of Scotland Yard, but apparently nobody clued him up on the fact that keeping your head down does not include dragging and rattling the family skeletons of the local gentry from their cupboards.

A few days passed by unnoticed, when Arthur Crook, that lawyer-cum-detective who defends the innocent and always catches his man (even if he has to fabricate evidence to proof that person's guilt), cycles into the snoozing hamlet and wakes it up with his startling discovery of the body of Tom Grigg. The body was found in the vestry of the derelict church, with the door locked and barricaded from the outside, effectively turning it into an hermitically sealed space – in which a charcoal burner had greedily gobbled up the air and burped out noxious, suffocating fumes.

Tom Grigg had pounded his fists to a bloody mess on the unyielding door, but the pleas for salvation went lost in the cool, night-time air that he so desperately needed and even if he was heard it would've been presumed to be the eerie wailings of the tormented ghost. A very neat, cruel and inexplicable murder, but just as unfathomable as the circumstances in which the black sheep was killed is the person the police are tagging for this crime: Mary Anna Manners!

What follows is a slow moving detective story, in which Arthur Crook tries to exonerate Mary Manners by giving the cupboards of the local aristocracy an early spring cleaning – which includes figuring out the reason why Tom left the village around the same time that the young heir apparent of that family and his rival in love broke his neck after tumbling down a quarry (although his death is ascribed to a curse that has plagued the family for generations and states the first son won't live to inherit the title and estate from his father). But he also falls back on his time-honored methods of duplicity to extract a confession from the murderer after having supplied this person with miles of rope.

Death at the Door managed to maintain a standard of quality through out the book, from the first lines to the final sentence, nonetheless, there remains more than enough room for improvement. The clueing remains sparse and the revelation is not entirely satisfactory. I also have yet to see the Agatha Christie-like brilliance ascribed to her by Nick Fuller, but hey, you have to be grateful for what you get – and there's improvement here as for as plot consistency is concerned. So hopefully the next one will not only be consistent, but also sport a brilliantly clued and staggering solution.
Geplaatst door TomCat on 11/06/2011