The Potency of Poison

"...you and I both know that every time we investigate a sudden mysterious death, or walk through the streets of the Necropolis, Death, like a shadow, lurks not far behind."
- Chief Judge Amerotke (The Poisoner of Ptah, 2007)

The internal structure of the plot of The Poisoner of Ptah (2007), the fifth entry in Paul Doherty's Judge Amerotke series, is as clever as it simple, in which Pharaoh-Queen Hatusu, the first female monarch whose head was adorned with the Double Crown of Egypt, has to look on as her sultry kingdom is turned into a multi-layered chess board – on which she has to craftily maneuver her pieces around in order to ensnarl her Libyan adversaries. 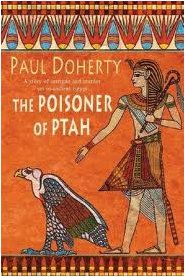 But there's one piece on the board moving independently from the Egyptians and Libyans, a wraithlike presence referred to as The Rekhet, who becomes a third King in the game and both competitors are determined to wipe him from their playing field. The Rekhet was once a knowledgeable priest at the Temple of Ptah, where he was one of the medical clerics who dispensed potions and powders to the ailing citizenry and pilgrims, but when an alarming number of them prematurely shed their mortal coil he finds himself faced with a charge of poisoning – and threw himself at the Pharaohs mercy to save his neck.
In exchange for his confession, The Rekhet was exiled to an oasis prison, which, in spite of its misleading designation, is not a celestial patch of lushly green and maroon blue, situated in the middle of a blazing hell, where embarrassing subjects of the empire are comfortably tucked away. It's a guarded hellhole, where you are ensconced for the rest of your life under the tormenting countenance of the radiating tyrant in the sky, but this infernal region, functioning effectively as a prison cell, gives the poisoner an unquenchable thirst for freedom – which he will eventually gain and not long after effecting his escape the city of Thebes is once again plunged into a poisonous plague.
During the signing of a treaty at the Temple of Ptah, between the nations of Egypt and Libya, three leading scribes, who drew up the terms of the covenant, also drew their last breaths on the temple forecourt – poisoned in front of a captivated crowd under what appears to be impossible circumstances! The scribes had observed the sacred rites by fasting a day before the ceremonial signing of the document and during the ceremony they had drank from the same bowl as the Libyan envoy who suffered no ill-effects from the sacred wine. Hatusu immediately grasps the severity of the situations and that mere pawns or bishops are not going to get this job done, and begins moving her dark knight: Lord Amerotke, Chief Judge of the Hall of Two Truths.
As to be expected, the Chief Judge of Thebes is confronted with a spate of violent deaths, as the narrative of his literary father slinks through the city like the bubonic plague, extinguishing life lights in nearly every chapter, enmeshing the judge in a tangle of knotted plot threads. A wealthy merchant and his wife are drowned under inexplicable circumstances in their pool, located in a garden guarded and surrounded by an unscalable wall, while back at the temple the remains of a foully poisoned temple girl, tightly clutching a dying clue, is uncovered – and these are only the deaths that have a direct bearing on the case at hand.
The body count of any Paul Doherty novel usually resembles the number of "guests" who checked into a big city morgue over the course of a busy day and his entire oeuvre could easily fill-up a second Catacombes de Paris, but in this story the soaring body count interestingly reflects the attitude of this ancient civilization towards violent deaths. In the first chapter, the signing of the treaty between Egypt and Libya is preceded with the ceremonial execution of a troupe of sand dwellers, murderers and thieves, who are brutally clobbered to death by Hatusu as sacrifice to her righteous anger and as a warning to her many enemies. This is greeted with downright hero worship from the onlookers, but when a few minutes later, on that same forecourt, three scribes clutch their stomachs and keel over everyone is outraged over this disgrace and insult to the throne of Egypt.
But with the cloaked, spectral figure of the Grim Reaper stalking the footsteps of nearly every character in the book and the wealth of historical details makes for a captivating read, which not only demands your full attention but simply taking possession of it, making up for some of its flaws as a detective story. The clueing is once again sparse and not every plot thread is tied up with equal satisfaction, such as the impossibilities surrounding the drowned merchant and the dying message left by the dead temple girl, but I liked the simplistic idea behind the impossible poisoning of the three scribes – even though that solution also has its problems. The Rekhet storyline was also adequately resolved.
The only real letdown was that none of these later books, from this particular series, seem to be able to measure up against The Horus Killings (1999), which retrospectively seems a lot better now that I have read more of his work, and The Anubis Slayings (2000), which shows this author at his scheming best and offers a clever, but simple, locked room scenario with a satisfying conclusion. I hope the final entry proves to be a return to these two earlier books.
All in all, The Poisoners of Ptah is an excellent, but flawed, detective story with a rich and multi-layered plot, but you have to take Paul Doherty's weaknesses in consideration and accept them to be able to bask in those riches.
Yes, the next blog post will be a return to the Golden Age of Detective Fiction. No, it will not be another Anthony Gilbert entry.
All the books I have reviewed in this series:
The Mask of Ra (1998)
The Horus Killings (1999)
The Anubis Slayings (2000)
The Slayers of Seth (2001)
The Assassins of Isis (2004)
The Poisoner of Ptah (2007)
The Spies of Sobeck (2008)
Geplaatst door TomCat on 11/14/2011