A Sanctuary for Sinners

"The light itself, Mrs. Bradley thought, looked friendly. The high walls and the gaunt, stark church threatened those without, yet gave an impression of guarding those within. But all dark deeds seemed possible--she had noticed it before--in tall buildings seen by moonlight."
- Gladys Mitchell's St. Peter's Finger (1938)

St. Peter's Finger (1938) has been cited by P.D. James and Philip Larkin as one of Gladys Mitchell's most noteworthy contributions to the genre, which was also her own opinion of the book, and this review will probably end up resonating with the echo of those sentiments. 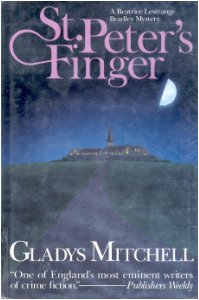 It's very likely that Gladys Mitchell found in her sister, a Dominican nun, an untapped reservoir of inspiration and knowledge, from which sprung this story, and this also had a profound effect on her writing – as few of her flaws were able to secure a spot between the covers of this book.
Meticulous plotting is conjugated with characterization as sharp as a flint and the backdrop is a convincingly drawn convent. The tranquility of the convent, in spite of the turmoil, also has its effect on the personality of Mrs. Bradley, whose demeanor resembles more that of a pet python, subdued after being put under local anesthesia by a vet, rather than that of a benevolent crocodile who just had lunch and unleashes shrieking noises not heard since the days when pterodactyls ruled the skies above us, but her methods are nonetheless successful – even though she's not entirely in control of what goes on most of the time.
The presence of Mrs. Beatrice Lestrange Bradley at the convent, which is alluded to by the locality as Saint Peter's Fingers, in reference of the steady flicker of light that burns in the church tower that once warned passing ships before it was released of that duty by a newly erected lighthouse, has very little to do with a spiritual crisis or to recuperate from a breakdown, but with a plea from her son, the barrister Ferdinand Lestrange, to look into the death of a 13-year-old girl. One of the students at the convent, Ursula Doyle, was found submerged in one of the bathtubs in the guesthouse, but the cause of death turns out to be carbon monoxide poisoning and since the boiler was not defect, the coroner's jury settled on a verdict of suicide.
But Mrs. Bradley finds that the verdict is, within the confines of the convent, is not thought of as gospel and that few of the nuns believe that the girl committed the cardinal sin of suicide, but an unfortunate accident seems equally unlikely and the possibility of murder as undesirable as the standing verdict of suicide.
Nevertheless, a murderer is what Mrs. Bradley is looking for and with her probing into an inheritance and religious mania, which are skulking in the background, it's inevitable that the viper at the bosom of the convent will uncoil and strike again – and this is where the excellent characterization comes into play. There's plenty of plot to sink your teeth in, but at heart this is a character-driven detective story and this is reflected in the nuns, whose uniformly attire failed to conceal the fact that they were all endowed with a personality of their own, and the eventual revelation of what really happened in the bathroom of the guesthouse.
The murderer is well characterized and the motive is grounded in the psychological make-up of this person, making the solution feel like an inevitability, but I also have to give Mitchell props for the false and more conventional, plot-driven solution that could've closed the book on this case with equal satisfaction as the eventual conclusion. But even the solutions, good though they are on their own, are improved and elevated by the characters who populate the convent.
I also loved the fact that Mrs. Bradley, after finally getting a grip on the case, slowly turns into her old self again and startles some of the nuns with sudden, frightening cackles and has to restrain herself from poking one of them between the ribs with a yellow claw – and to top it all off the finally is set during a fiery sequence with the Grim Reaper looking them dead in the eyes. However, this harrowing, but excellent, scene also provided me with the one point of criticism that I can fire at this story and that is that the nuns are a lot less sympathetic in the face of an immediate crisis, preferring to take their sweet time to don their habits and pray instead of immediately taking action to safe their students from being burned to death, but that's just a personal annotation to this scene.
St. Peter's Finger is an excellent and outstanding novel of detection, inhabited with convincingly drawn characters placed in what I imagine to be is a realistic setting and saturated with memorable scenes, which makes it hard to argue with those who rank this book among Mitchell's best work. Gladys Mitchell may be an acquired taste, but once you've cultivated an appreciation for the unique flavor of her brand of detective stories you get enjoy something really special – even when her approach is sober and subdued in tone like is the case with this story. But it's this restraint that Mitchell shows that just might make this book the perfect introduction to readers who are new to her work instead of starting off with her other earlier, more imaginative and sometimes highly unconventional mysteries.
Definitely recommended to both fans and newcomers!
Geplaatst door TomCat on 11/25/2011