"Murder is like any game. As in chess, you begin the game and you plan your moves. I doubt if your mind was bent on murder at first: more on catching the King's eye..."
- Hugh Corbett (The Devil's Hunt, 1996)

Paul Doherty remains one of the most reviewed authors in this niche of the blogosphere and I have done a fair share of clogging the feeds with critiques of his historical romances, brimming with high treason, royal chicanery and murder most foul, but the arrows pulled from my quiver were mainly aimed at the ones set in ancient Egypt – which diverged from the approach of fellow connoisseurs who buried themselves in medieval Britain or classical Rome. 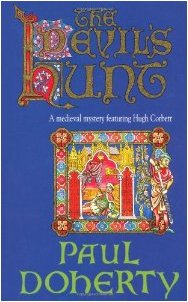 So, I decided that after finishing off nearly the entire series and jotting down five reviews, it was time to take a brief detour from the sweltering deserts and sultry cities, where Chief Judge Amerotke precedes over the courts, to the early 14th century – when Hugh Corbett investigates and quelled threats that imperiled the crown and reign of King Edward I. Admittedly, I embarked on this journey, over the pages The Devil's Hunt (1996), with not much that would qualify as expectations, however, when the pages began turning into chapters and the central players become more than just names, I really started to enjoy the story – and after flipping over the final page I was sold!
When the story opens, Hugh Corbett has emerged from retirement at the King's request and finds himself en route to the university town of Oxford – which in recent weeks has become a breeding ground for murder and sedition. The first predicament thrown in front of the King's loyal bloodhound is that of an amorphous entity, known as the Bellman, who covertly stalks through the sleeping streets at night to post treasonous bills and letters on doors, but these puerile attempt at in-sighting dissension among the citizenry of the town takes a complicated turn when the Bellman is linked to a series of deaths at a local college.

Whispering tongues wag with speculations on the true cause of death of John Copsale, regent of Sparrow Hall, who went to bed one night and never woke up again. It's assumed that he died of natural causes, but the wagging tongues are dripping with rumors of poison. Not long there after the remains of the college librarian, Robert Ascham, are retrieved from behind the bolted doors of the college library – with a crossbow bolt driven through his chest and a piece of parchment near his hand with a dying message on it scrawled in blood.

Oh, and if that wasn't enough to keep Corbett occupied, there's also an axe-wielding murderer on the loose, who decapitates beggars and adorns the branches of the trees in a nearby forest with their heads!
Hugh Corbett is hot on their trail and along the way he establishes himself as an engaging and likeable detective, however, Doherty appears to be using duplicate molds from which he castes his snooping protagonists and this resulted into Corbett's subsidiary, Ranulf-atta-Newgate, to seize the limelight from his master.
Ranulf is as skilled with a dagger as he's with a quill and simply the most fascinating character roving the pages of this bloody saga with a brooding personality that's in the process of evolving, which was a turn-up for the books, since I never detected any development in the nature of the regular faces from the ancient Egypt series – in which the characterization tends to be one note. The best scene with Ranulf is probably when their friend, Maltote, was mortally wounded at the hands of the Bellman and lay writhing in pain, lingering to be lulled to sleep in Death's merciful embrace, which prompts the young clerk to relieve his suffering friend by making him sip from a poisoned cup of wine – and solemnly vows to avenge his death. Great writing!
Once more, Paul Doherty proves himself to be the modern day equivalent of a medieval minstrel who effortlessly captures your undivided attention when telling a story and artfully mingles historical facts with the paper phantoms that sprang from his own imagination – and this time the story was even moderately clued! You can anticipate the solution if you were observant enough and that made up for a few weakly executed plot elements.
Part of Doherty's modus-operandi, as a mystery writer, is introducing a whole tangle of plot threads, usually enough to pad out several novels and one or two short stories, but rarely does he seem to be able to deliver on all of them with equal satisfaction. In The Devil's Hunt, I was less than impressed with the resolutions of the murder in the locked library and the case of the decapitated beggars, but the plot was rich enough to absorb these minor letdowns and dropped me off at the final page as a thoroughly satisfied reader. Heck, the unexpected cliffhanger has me on the qui vive for its sequel!
On a whole, this was an excellent introduction to a new series and I recommend taking an expedition, under the guidance of this wonderful story teller, into our past and marvel as your tour guide resurrects centuries and entire civilizations that have been enwrapped and shrouded by the mists of time – which guarantees an interesting and intriguing read even if the story fails as a fair play mystery. Recommended without reservations!
Geplaatst door TomCat on 11/04/2011