"If you call one wolf, you invite the pack"

"It is not so much our friends' help that helps us, as the confidence of their help."
- Epicurus.

When I critiqued the cooperative effort Twospot (1978), penned by Bill Pronzini and Collin Wilcox, I dropped a hint that the next nameless tale loitering in the queue was another crossover novel, in which Pronzini and his mystery writing wife, Marcia Muller, had pooled their series detectives – and in preparation, I wanted to dig into one of her Sharon McCone stories first. Well, that didn't happen. The problem that upset my initial plan, is that the book that piqued my interest also happens to be one of a handful of her tomes that is not within the immediate grabbing range of my covetous claws. So I decided this book would be my formal introduction to her characters. What else was I suppose to do? Exhibit more patience? 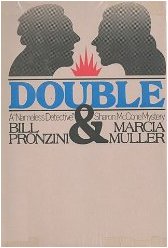 Double (1984) is set at a luxurious San Diego hotel hosting a convention for professional snoopers, who collect their paychecks in the private sector by keeping adulterous spouses under surveillance and nosing around for missing persons, which seems a likely spot for two ace investigators to bump into one another – as well as cueing the cog-wheels of faith to open another can of bodies. The first of these victim fell from one of the hotel spires, four floors to an ugly mess on the cobblestone strewn soil, witnessed by that anonymous murder magnet who recognizes in the remains the establishments chief of security and former associate of Sharon McCone.

A lamentable suicide or an ill-fated accident is the prevailing opinion of Elaine Picard leaping into oblivion, but subtle undercurrents at the hotel gives a different interpretation of her death – and Nameless and McCone withdraw themselves from the hustle and bustle of the convention to embark on an exhaustive, perilous quest for the truth without the backing of a client or the prospect of a fee!

The story is told in the unmistakable, first person narrative that is the trademark of the private eye genre, but here the perspectives alternate between Nameless and McCone – which is a really nifty recital device when you have two such distinctive characters at your disposal to give the reader a report of the events as they went down. But this also included a drawback for me. I spend half of the book peeking over the shoulder of a character I was already on first name terms with, while the other was a complete stranger to me and this gave me more of a connection with story when Nameless was narrating a chapter – which contained everything I enjoyed about these novels. Pronzini always creates an opportunity to bring up his pulp collection and there were subtle bits of humor here and there (e.g. giving the name of his father-in-law when he invaded an adult book-and-curio shop, although, I would've probably LOL'd hard if he had identified himself as Russ Dancer).

Nonetheless, it was a delight to make my acquaintance with Sharon McCone and loved the nickname she stuck nameless with through out the story, namely Wolf, which was lifted from a newspaper article labeling him as the last of the lone-wolf private eyes – and she's the only one who can call him Wolf and get away with it. Nope. It's not what you think. Their relationship is nothing like that. McCone kindles Nameless paternal instincts rather than his amorous ones and it's just a friendship based relationship grounded in a common, professional interest that also happens to fuel their investigation into the death of Elaine Picard.

Like I noted a couple of paragraphs earlier, McCone and Nameless work, more or less, pro-bono on this case and even take a financial beating by voluntarily probing the wasps' nest that is the hotel and vanquish some minor evils as they attempt to close in on the truth. These quests include tracking down a mother with her son, after they vanished from one of the hotel bungalows, locating a private club which was frequented by security chief months prior to her death and leaving only two additional bodies in their wake – which should've been a lot higher with these two cursed detectives working on the same case. So you have to applaud them for not causing a small-scale holocaust at the convention!

The plot itself wasn't bad, but only the first murder was properly clued (as far as clueing goes in a private eye novel) and the other deaths were an additive of the first murder, but then again, this is not the type of story in which you're suppose to be on the look-out for clues and put down the book to construct a clever theory of your own. You simply have to fulfill the role of silent partner as you tag-along with Nameless and McCone on a very bumpy ride on the road of discovery, and find out how a series of events could've escalated in a murder that ended up wrecking the lives of half-a-dozen people. At heart, this is one of those dark, gritty crime stories but also one of the best of its kinds that I have read. Not quite as ingenious as Hoodwink (1982) or as grabbing as Shackles (1988) though, but close enough to be considered as one of his better stories and one that argued a pretty good case for me to be less picky when it comes to scoring a Sharon McCone novel.

If you told me a few years ago, shortly after pledging my alliance to John Dickson Carr and his devoted followers, that there would be a day when I would be reading and praising abrasive, hardboiled private eye novels, I would've probably chucked a string of garlic at your head while hollering, "The power of Edgar Allan Poe compels you!"

On a sidenote, I toned down my overblown writingstyle a bit (compare this blog post to the previous one) and I want to know if this is preferable or not.

All the books I have reviewed in this series: