A Night at the Opera

I alluded in a previous blog post to the possibility that I had come up with a contemporary compeer in Herbert Resnicow to William DeAndrea and Bill Pronzini, and having just finished reading a third classically styled, exquisitely plotted detective novel with his name plastered across the dust jacket I feel vindicated in my premature assertion of the man. He was perhaps one of the last true GAD writers the Western mystery genre has seen. 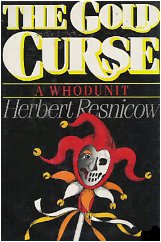 The Gold Curse (1986) has the colossal union of the behemoths Alexander and Norma Gold attending a charity performance of the opera Rigoletto, at a thousand bucks a seat, featuring an all-start cast and crew, but the backstage atmosphere is tainted with strife, rivalry and bloodlust – and the final aggregate of this disastrous, star-lit assemblage is an impossible stabbing during the final act of the play!
But I passed over the rapid succession of brief, but evocatively, written chapters preceding the murder here, in which the tension is gradually mounting during the first two acts and you can feel the looming presence of the Grim Reaper waiting in the wings for his cue. Beautifully done! Resnicow also draws parallels between the performers and characters they're portraying by noting that, when the characters are cursing one another, they're speaking with the vitriolic tongues of the opera singers themselves – which was enough by itself to want an encore before the curtains had even closed on the first act.
Well, there you have it! An audacious murder committed under seemingly impossible circumstances, during a rendition of a famous opera, with thousands of eyewitnesses in attendance and four running television cameras, but none of them spotted the knife wielding fiend when the victim received the fatal knife thrust – including Alexander Magnus Gold. Needless to say, this does not sit well with a man whose physic is dwarfed only by the size of his stellar ego, but now that he's a licensed private investigator he sort of needs a client. Not that the unsavory Cretan billionaire, Minos Zacharias, who has his dark motives for retaining Alex and Norma, is the perfect client, but he has to do – although the golden pair are playing hard-to-get as they gamble with a $1.000.000 fee!
The ensuing battle-of-wits between the Amazonian Norma and her hardheaded husband against the Cretan billionaire is probably my favorite part of the book. You could argue that it takes up too many pages, but it sets-up a part of the solution and it's just fun watching Norma, "fastest lip on the West Side," bounce snarky comments off on someone not named Alexander – and seizes control of their prospective client. Of course, her partner has to upstage her by showing off his massive intellect and prolonging this clever and witty sequence.
During the second portion of the book, the investigative husband-and-wife team begin to audition suspects for the role of murderer and attempt to reconstruct the events in order to find out the true nature of culprit's invisibility trick – which is both delightfully simple and workable. This gives the plot an edge over other locked room stories with similar on-stage murders, like Christianna Brand's Death of Jezebel (1948) and Ngaio Marsh's Off with His Head (1957), boosting clever, but complicated, solutions.
It's interesting to note that Resnicow's locked rooms are set in large open spaces. In The Gold Solution (1983), the sealed crime-scene is an entire top-floor apartment and The Dead Room (1987) has a stabbing in a large anechoic chamber, but he locked them as tight as a drum and the same goes for the stage in this story. It's an open space, in which people are constantly moving around, however, everything plays out in such a way that nobody was near the victim when she was stabbed. Locking up a body in a locked and bolted study or bedroom is one thing, but it takes a considerable amount of skill to set an impossible crime in these spacious environments and he should be commended for pulling it off a second time (his first effort was only so-so).
Simply put, The Gold Curse is an astute and amusing romp, populated with both likeable and detestable characters, whom all dance around a scorned opera singer, while one of them plunged a knife in her neck in full view of a sold-out theatre and four running television cameras without being seen – and provides a satisfying and believable solution. The only blotch is that the killer's motive was insufficiently clued, but that's a minor quibble in light of the overall plot. I loved this book, plain and simple.
It's mind-boggling that a prolific mystery writer, whose oeuvre consists mainly of impossible crime stories and was even nominated for a coveted Edgar statuette, has been all but forgotten today as he's rarely, if ever, mentioned or revered to – at least not in the digital realm. I'm probably the first reviewer in many years to post more than just a few passing lines on the web regarding his work and that's just a depressing thought. I guess Herbert Resnicow found a new champion and I'll be place a few more orders for his books in the months to come. Stay tuned!
The Alexander and Norma Gold series:
The Gold Solution (1983)
The Gold Deadline (1984)
The Gold Frame (1986)
The Gold Curse (1986)
The Gold Gamble (1989)
Geplaatst door TomCat on 8/21/2011