"There's nothing like the story of ghostly murder and brutal death, by forces unseen, to unsettle the minds and souls of our community."
- Khaliv (The Horus Killings, 1999)

Over the past few weeks, a fellow connoisseur in crime, who operates under the moniker Puzzle Doctor, launched an ongoing campaign to beat the drum for Paul Doherty – an educator and historian who draws on his professional knowledge to craft historical mysteries saturated with seemingly impossible crimes. At first, I endeavored to be strong, resolute and stalwart in the face of this temptation that was put before me, but after the first victim of the docs sales pitch dropped without a fight I knew it was time to take the road of least resistance and just give in.

However, instead of stepping back into medieval Europe, which seems to be the backdrop for a considerable chunk of Doherty's output, I took a trip to warmer climes – and settled on a story from one of his series set in ancient Egypt. The torchbearer in these books is a respected chief judge, Amerotke, who's assisted in administrating justice by several henchmen, among them a dwarf named Shufoy and the raunchy Prenhoe, who take up the legwork that is required outside of the exalted circles of society. The parallels between Robert van Gulik and Bertus Aafjes are easily drawn, but the resemblances are superficial as the character of the judge perfectly stands on his own, even though he's, at times, the only real personality in the story as the other characters are rather flat, and the setting naturally gives the story an altogether different flavor. Doherty's expertise and passion for history expresses itself in the setting and the details of every day life briefly resurrected a civilization from thousands of years ago. 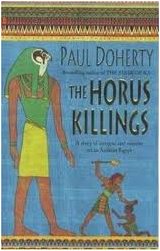 The Horus Killings (1999) is the second entry in the series and takes place after Hatusu, the widow of Pharaoh Tuthmosis II, ascends as first woman the thrown after having lead a victorious army in a bloody war with the Mitanni – which is interpreted by her followers as a sign that the Gods are in her favor. But to make her divine rule undisputed, she needs the support from a circle of religious leaders, who hold an opposing view on the interpretation of definitive signs from the Gods, but an inundation of brutal killings at the Temple of Horus is endangering the first reign of a Pharaoh-Queen – as scholars are turned into human torches, flasks of poisoned wine are passed around and a Divine Father is murdered in locked room on the top floor of a garden tower!

Judge Amerotke has more than enough workload with a murderer who assiduously dispatches people towards the Far Horizon, but there are also two unconnected subplots that hover inconspicuous in the background. The first of these problems concerns the semi-impossible disappearance of two brothers from a maze, but the solution is pedestrian and a lame plot-device to resolve a touchy murder charge issued by the influential father of the boys against the son of another important person. A legal dispute that arose when a woman remarried after her abusive spouse was reported killed in battle, but turned up very much alive, spun out in something more interesting, however, hardly satisfying for someone who reads Bertus Aafjes.

That's pretty much the overall theme of the entire plot. The problems and challenges facing Judge Amerotke are cleverly devised, but the solutions failed to excite me – even if they weren't bad at all. The crux of the secret behind the murder in the locked garden tower is perhaps not a revolutionary one, but I tend to like it and the presumption everyone made on the ideal escape route from such a building was very perceptive on the authors part. I just wasn't blown away by it.

In summary, the solutions, for the most part, lacked inspiration and the clueing was too sparse to be really satisfying, but a writer who loads a detective novel with semi-impossible disappearances, a seemingly supernatural murder in a locked tower room and a baffling dying message is a man after my own heart – and someone who can probably do better than this. Now don't get me wrong, this still an extremely readable and fairly clever plotted story, and it was a delight to come across yet another contemporary mystery writer who takes joy in setting his character loose in a mazelike plot. Definitely going to read more of Paul Doherty's locked room mysteries in the very near future.