The Scarlet Circle (1943) by Jonathan Stagge

Hugh Wheeler, Richard Webb, Martha Kelly and Mary Aswell formed a team of writers who collaborated on a number of detectives series, standalone mysteries, crime novels and short fiction – published under the names "Patrick Quentin," "Q. Patrick" or "Jonathan Stagge." Over the years, I've sampled about ten of their novels covering everything from their Peter Duluth and Lt. Timothy Trant series-characters to their phenomenal crossover in Black Widow (1952) as well as a few standalone novels. 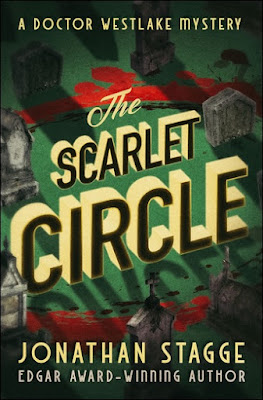 I also read a Jonathan Stagge novel, Death's Old Sweet Song (1946), which once upon a time used to be easiest Dr. Hugh Westlake mystery to get your hands on. The book has a good reputation and expected much at the time from a story in which a serial killer goes ham on a small town with murders patterned after a nursery rhyme. So comparisons to S.S. van Dine's The Bishop Murder Case (1928), Agatha Christie's And Then There Were None (1939) and later Ellery Queen's Cat of Many Tails (1949) and Double, Double (1950) were inevitable. Sounds enticing, I know, but I'm still of the opinion Death's Old Sweet Song is the weakest of all nursery rhyme-themed mysteries. The use of the nursery rhyme motif is likely the sole reason why the book is remembered at all, because as a detective story it was weakly-plotted, obvious and disappointing.

So with secondhand copies and reprints in short supply back then, I quietly exited the Dr. Westlake series, but there's one title that kept cropping up. A novel that has been personally recommended to me over years several times. Now that the Mysterious Press has reissued the entire series, I decided to finally give Stagge and Dr. Westlake a second shot.

The Scarlet Circle (1943), published in the UK as Light from a Lantern, is the sixth entry in the series and I can see why people thought I might like it. As Curt Evans wrote in his 2012 review, Stagge's The Scarlet Circle "should be guaranteed to please devotees of John Dickson Carr, Ellery Queen and Hake Talbot," but not for the reasons some of you might assume, because this is not a locked room mystery or impossible crime novel – a bizarre, outre whodunit with a small, tightly-knit circle of suspects. The story has Dr. Westlake taking his 10-year-old daughter, Dawn, on a September holiday to Cape Talisman. One of those "spots against which the elements seem to have a perpetual grudge" as, inch by inch, "the waves were encroaching upon the crumbling dunes" and "the older section of the town, which was once a flourishing community, was now almost deserted." The old church has already been abandoned, a hurricane had "carried away all the tombstones on the seaward side of the churchyard" and the Talisman Inn "now had the beach for a front garden." Call me a Dutchman, if you want, but that had me hooked from page 1 and the story hadn't even touched upon the bizarre string of murders yet! On their way back to the Talisman Inn, Dawn notices a pink light moving around the old churchyard. Dr. Westlake goes out to investigate and comes across "a strange, shapeless figure" who scurried away at the sound of his voice and left behind a paper Chinese lantern next to an opened grave.

What a fantastic opening to a good, old-fashioned detective story, but someone creeping around the churchyard with a Chinese lantern to dig up graves is only the beginning. That becomes all too apparent once Dr. Westlake and Dawn return to the inn.

There were only a about a dozen people at the inn. Firstly, there's Mr. Mitchell, the owner-manager, whose "impeccable New York clothes and his impeccable New York manners" can't hide his desolate resort is slowly disintegrating around him. Mr. Mitchell takes pride in still employing a lifeguard, Buck Valentine, who's "a red-blooded young he-man with a very roving eye," but the only women he could turn an eye to were the two waitress-housemaids or Nellie Wood. The nursemaid of 5-year-old Bobby Fanshawe who's staying at the inn with his parents, Virgil and Marion Fanshawe. Virgil Fanshawe is a successful commercial-artist and with Dawn taking Bobby under her wing, Nellie Wood has her hands free to pose for her employer and that's usually more than enough to get rumors started in small places. Marion Fanshawe is a complete mystery to Dr. Westlake as she appears to exist in "a strange vacuum of personal silence." Benjamin G. Usher is an undertaker who's always carrying or reading the Bible, but "the sight of him leafing through Deuteronomy conjured up obscene images of sacrilege and Black Masses." Lastly, there's the tall, willowy painter, Miss Haywood, who kept herself to her ladylike self. 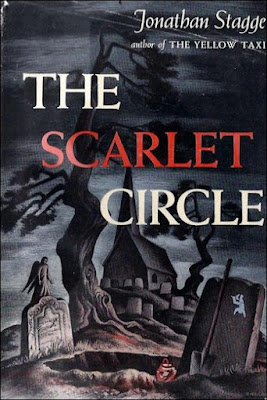 Dr. Westlake is not blind that "there's enough tension accumulating" around him to "blow up the inn." And only a few hours later, Dr. Gilchrist calls Dr. Westlake out of his bed to inform a body had been discovered down by the rock known locally as the Monk's Head ("some eerie piece of devil's sculpture"). The body of Nellie Wood was lying in a "grotesquely pious" pose, hands folded and eyes closed, lighted by the pink glow of a cheap, decorated Chinese lantern – a scarlet circle had been scrawled around a mole on her left cheek. Inspector Sweeney is very aware of Dr. Westlake's status as a successful amateur detective and is not only willing to accept his help, but offers to swear him in as a deputy sheriff as he knows an amateur like him is simply "itching to get in on this thing." And he's not wrong! But is the murder a result of the emotional powder keg back at the inn or the work of a serial killer stalking the beaches of Cape Talisman? And has it anything to do with what goes on in the churchyard? All the while, the bodies begin to pile up as sightings of "that strawberry-ice-cream pink" glow from the Chinese lanterns become a harbinger of death.

The Scarlet Circle perfectly utilizes its setting to not only give the story a distinct flavor of its own, but also to give it a feeling of genuine isolation. Cape Talisman is not cut-off from the outside world, but the Talisman Inn feels like its located at the end of the world as the sea slowly encroaches on the place. Add the small cast of characters who are quickly being thinned out by "a murderer insanely obsessed with moles," you have a very intimate and suspenseful whodunit. The murders and mysterious situations Dr. Westlake has untangle also feel somewhat native to the Cape Talisman, which gives The Scarlet Circle a link to the works of regionalist writers like Todd Downing (e.g. Murder on the Tropic, 1935) and Arthur W. Upfield (e.g. Bony and the Mouse, 1959). Particularly towards the end when the ocean comes back to pick a fight with the Cape Talisman and gives the book another link to that rare subgenre known as the disaster detective (e.g. Tyline Perry's The Owner Lies Dead, 1930). But the plot is top-notch as well.

Dr. Westlake has his work cut out for him and a treat for everyone who dislikes inactive detectives who sit on their hands. Dr. Westlake has to pry away the long, closely-guarded secrets from all the suspects as well as clearing up certain misunderstandings and digging around in the distant past to get some answers. You have to take that digging both figuratively and literally, but, when the story has run its course, "there's only one person" who could have done it. That comes not as the result of a last-man-standing situation, but the evidence pointed to that person as the only one who ticked all the necessary boxes. An immaculate piece of fair play that completely eliminated my spare suspect who I actually favored as the murderer, but, by the end, Dr. Westlake was right. Only that person could have done it. There are, however, two very small smudges on the plot. I can see now why so many readers hate Dawn as a character. She's not an endearing character and creating child characters obviously was not the forte of the Quentin Collective. The second, very minor, smudge is a familiar element to the solution, but it was put to such good use in a busy, richly detailed and well characterized detective story, it borders on nitpicking to complain about it.

So, yeah, the people who recommended The Scarlet Circle figured correctly it would go a long way in redeeming the Dr. Westlake series after the underwhelming Death's Old Sweet Song. A truly rock solid, engagingly written and suspenseful detective novel that earned other Stagge titles like The Dogs Do Bark (1936), The Stars Spell Death (1939), Turn of the Table (1940) and The Yellow Taxi (1942) a top spot on my wishlist.