The Reader is Warned (1939) by Carter Dickson

Several months ago, I reread and reviewed John Dickson Carr's The Problem of the Green Capsule (1939), whose reputation received a much deserved boost during the internet age as the story magnificently showcases Carr's ability to construct and navigate intricate, maze-like plots – planting clues along the way that double as red herrings. The Problem of the Green Capsule demonstrated he wasn't depended on murders in hermetically sealed rooms and fields of virgin snow to write a baffling detective story. And it made me want to revisit another one of his 1939 mysteries. 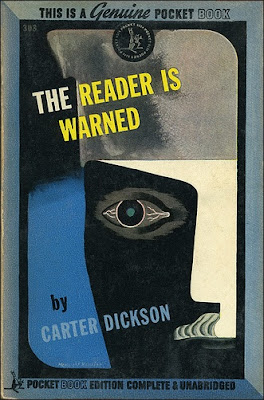 The Reader is Warned (1939) is the ninth novel in the Sir Henry Merrivale series, published as by "Carter Dickson," which has always been somewhat of a low-key masterpiece of the series. A novel generally admired and highly rated when discussed, but rarely referenced or under exposed when discussing Carr's work or impossible crime fiction in general. You can probably put that down to the whole story trying to be as low-key and inconspicuous as possible in spite of it being constructed around some very ambitious and even sensational ideas.

Carr restricted the story to a few locations, centering on half-a-dozen characters, while the sensational, headline-grabbing implications and potentially "an international situation" is played out in the background – ultimately just played for laughs. It all worked out beautifully in the end. Although it likely made the book a little inconspicuous and easy to overlook. Particularly among Carr's impressive body of work, but not something that can't be fixed.

The Reader is Warned is narrated by a consultant to the Home Office pathologist, Dr. John Sanders, who's invited by a friend and young barrister-about-town, Lawrence Chase to spend the weekend at Fourways. Fourways is the gloomy, Victorian-Gothic home of two great friends of Chase, the Constables. Mina Constable is better known to the general public as the romantic novelist, Mina Shields, who even tried her hands at "a straight detective story" that was "most unmercifully slated." Sam Constable is a retired textile manufacturer and "the complete British clubman" as well as being a bit of a domestic tyrant ("will you stop twitching and jittering with that glass, like an old hag soaking up gin in a pub"). And they'll be entertaining two more guests beside Chase and Sanders. Miss Hilary Keen is the lovely, keen-witted friend of Chase and Herman Pennik is a self-professed mind-reader. Pennik's presence is the reason why Chase asked Sanders "to bring Sir Henry Merrivale as well," but he's away on official business and can't come until Sunday. Too late to prevent the murder. 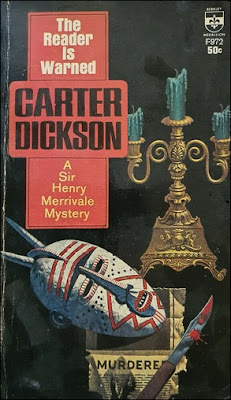 Herman Pennik regards Sam Constable as "an ill-mannered imbecile, brutal to his wife, insulting to his guests, an obstruction to all mental or moral progress" and confrontation over cocktail gives him an opportunity to demonstrate the full power of his Teleforce – prophesying he would not be alive by the time dinner is served. Just as the clock struck eight, Sam Constable walked down a hallway to the staircase landing when Mina saw him "dancing or staggering" from her bedroom door before he fell across the handrail. Less than a minute later, Sanders caught "a faint flutter of pulse" which stopped the second he found it. This where things not only get really weird, but outright impossible.

Sam Constable died without a mark, external or internal, on his body and there was not a single trace of any kind of poison. Solid, liquid or gaseous. Neither was he anywhere near of an electric fitting. He simply had a fit in the middle of the landing and died a minute later. Things go from bad to worse when Pennik presents himself to Chief Inspector Humphrey Masters as the murderer who can't be arrested or held as a material witness. Pennik is more than willing to talk with the press about his Teleforce.

So the presence of the old man is more than just a little welcome, but Sir Henry Merrivale arrives not in the best of moods as "there's some low, evil-minded talk" about sticking him in the House of Lords. So he expected a quiet Sunday to end the weekend and now he finds himself in the middle of another impossible murder case, which could spell the kind of trouble that could send him away to the House of Lords. H.M. naturally begins to meddle in the case and comes across a parade of seemingly ordinary clues that always become a little bizarre or even sinister in a John Dickson Carr story. Such as the white chef's cap, the burned candles and blobs of grease to a missing scrapbook labeled "New Ways of Committing Murder," which provides the plot with a missing-object mini-puzzle. More complications arise when a second, equally impossible, death occurs. This time, Pennik not only possesses a unimpeachable alibi, but now he can also do astral projection!?! 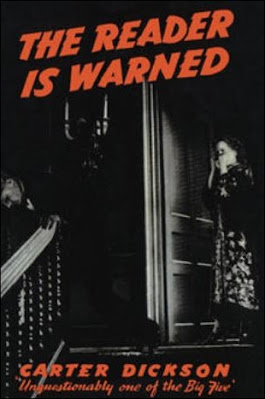 Some of my fellow reviewers (linked above) have rightly pointed out that Herman Pennik is one of Carr's best characters and villains, but what really made it work is that he's a character in a detective story. Pennik could not have succeeded in any other genre or format except the extremely fair play detective story. If Pennik had been a cartoon or comic book character, he would have been a badly written character with ill-defined powers that change when it suits the story. Pennik goes from being a humble mind-reader and being able to predict the future "to crack a man's bones and skull with thought" and astral projection. But here it served a purpose. For example, Carr used some uncharacteristically cheap, dime-store trickery usually reserved for second-and third tier mystery writers to explain the mind-reading act, predictions and astral projection – which were handily used to further both the plot and Pennik's characterization. There are the scraps and snippets showing the effect of the two mysterious murders have on the outside world ("TELEFORCE: NEW MENACE TO MANKIND?") and how it influenced the jury at the inquest. Just as pure entertainment, The Reader is Warned is as good as any of the better-known H.M. novels.

All of that's merely dressing and the true strength of the story is found in the answers to those three all important questions in any murder investigation. Who, why and how. Yes, the answer to those three questions were very clever indeed and mostly hidden in plain sight!

I've mentioned in my previous reviews Carr was practically unrivaled when it came to parading the naked truth in front of your eyes while simultaneously distracting your attention. You have to be a quick-witted, sharp-eyed reader to catch all of his sleight-of-hands on a first read, but The Reader is Warned might very well have his most daring and inspired pieces of misdirection. So clever and sneakily done, you can only really appreciate it on a second read, because even with all the fairly distributed clues and hints it's almost impossible to anticipate. Carr was very fair with his clues and hints. So fair, he practically spelled out the truth punctuated with several footnotes assuring there were no accomplices or mechanical devices lurking in dark corners. One of the footnotes reminded the reader that there has to be a motive, "though fully indicated in the text, is not obvious on the surface," advising “anyone interested in solving the problem" to "look carefully below the surface." Every footnote ended with the title of the book, The Reader is Warned. Carr was the embodiment of Cavalier sportsmanship!

The only flaw I was able to find, if you can call it a flaw, is that the story is very much a detective reader's detective story and new readers, to Carr and the genre, might want to start somewhere else first. But that hardly takes anything away from this brilliant, expertly cut gem of a detective story.

So what else can I possibly say? You're simply incomplete as a human being without having read and experienced Carr.