In my previous post, I reviewed a short story by Rintaro Norizuki, "Toshi densetsu pazuru" ("An Urban Legend Puzzle," 2001), which cleverly used the popularity of urban legends as a premise for a good, old-fashioned detective story, but Japan is home to much older, often more rural legends of monsters, spirits and demons – commonly known as yokai. The legend of the single most famous yokai in Japan is at the heart of a Detective Conan story. 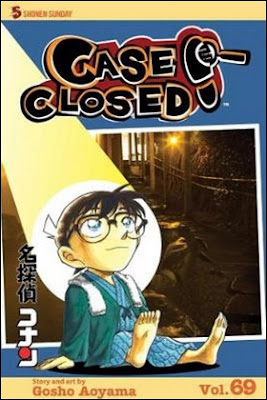 The 69th volume of Gosho Aoyama's Case Closed, published in most countries as Detective Conan, opens with Richard Moore, Rachel and Conan traveling to the Kora Inn, in the village of Kuchibashi in Gunma, to meet with a client.

Moore had received a letter alluding to a murder that had happened there 11 years ago and asked him to use his "remarkable deduction skills" to the clear the name of the writer, which was signed Mika Tatezato. However, the local police told Moore that there was no murder in that village 11 years ago. Mika Tatezato is not a name that figures on their wanted list.

As to be expected, Moore's client no-shows their appointment and it appears he has fallen for a very unfunny prank, but along the way, they learn a child was drowned in the river and the police concluded that the boy got his foot stuck between some rocks along the riverbank – before drowning in a flash flood. But why was the boy playing in the water in January? More interestingly, the region is rife with legends of the Kappa, "water monsters that lure the unwary," of which there was a rash of sightings 12 or 13 years ago. Rachel even spots one near the riverbank on their first day in the village.

On the following morning, the father of the boy and inn keeper is found dead in a dimly lit attic room overlooking the river. His body was drenched in "a putrid fishy-smelling liquid." As if the Kappa had grabbed him and "dragged him into the depths of a swamp."

This is an excellent story that was very reminiscent of Gladys Mitchell's Death and the Maiden (1947), in which two young boys are drowned in a river following sightings of naiads (water nymphs), but Aoyama crafted a much tighter plot. The central puzzle of how the putrid water was brought from the swamp to the attic can be classed as a quasi-impossible situation, but here the trick is used to establish an unusual kind of alibi. My only complaint is that the murderer telegraphed his identity to the reader practically from the start. However, this was more than made up with the tragically misunderstood motive and sad ending. An excellent story with good atmosphere and back-story. Easily the best story in this volume.

The second story brings Doc Agasa, Conan, Anita and the Junior Detective League to a hot spring resort. Doc Agasa has invented a gadget for the owner of the hot springs, but lately, it has been malfunctioning and he has been asked to repair it. So he brought along the kids. 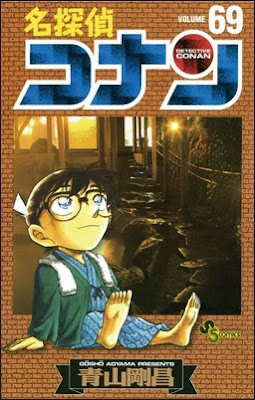 At the resort, they find out that the hot springs is used by a film crew to shoot a remake of the greatest movie in The Bloodsteam Hitman franchise, The Crimson Spring-Head, which is about a hitman who works at a hot spring and in the movie he "creates a perfect locked room murder" – solution to this fictional murder is briefly used as a false solution. Unsurprisingly, the screenwriter is murdered in one of the hot springs, but these are lake-top hot springs and you can only reach the pavilions by crossing a bridge. Nobody crossed between the time the victim entered, early in the morning, and when the body was found. It's a locked room murder on a lake!

This is another good story with a solid plot, but, sort of, figured out the plot. However, I was only able to do this because the locked room situation was very reminiscent of an obscure, little-known impossible crime novel from the 1950s. I doubt Aoyama has read the book, but I thought the similarities were still interesting.

The third story is an inverted mystery in which Hoshie Urai plots to murder her husband, Taruto Urai, who are president and vice-president of Urai Confections. He's specialized sweet candies and she's specialized in sour, which she uses to poison him during party and gave herself an unshakable alibi. Unfortunately, Richard Moore starred in a commercial for their Spy Chocolate White, "an ultra-sour white chocolate," which landed him an invitation to the party, along with Conan and Rachel – who is promptly used by Hoshie to cement her alibi. You'll never be able to figure out the poisoning-trick, because it requires a specialized piece of knowledge. One part of the trick could potentially have killed the murderer. Cyanide is not something you want to have on your skin.

On a whole, a pretty decent, but not especially good, detective story. This series has had better stories and two of them preceded this one.

The last two chapters begin a story that will be concluded in the next volume and has Conan, Anita and the Junior Detective League a dark, empty house filled with fragments of mysterious piano music. And diary entries hinting that a murder has taken place.

All in all, this was a great volume opening with the beautifully-done Kappa story followed by a good locked room mystery and a passable inverted mystery. Ending with the promise of another good story. So I was very satisfied.
Geplaatst door TomCat on 4/21/2019