Thomas B. Black was an American writer who began his career as a jack-of-all-trades, working in a refinery, a credit institution, a bakery and a munitions factory, but he also tried his hands at writing crime-fiction and his first novel was The Whitebird Murders (1946) – which was rapidly followed by two more novels in 1946 and 1947. His fourth and final novel, Four Dead Mice (1954), was published seven years later. 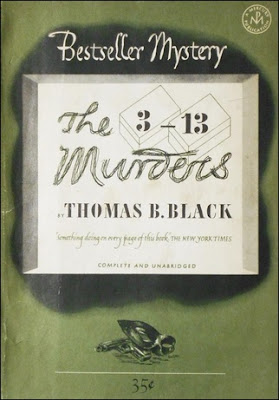 Black has been pretty much forgotten today, but during his short-lived career he had no less a figure than the lauded mystery critic and writer Anthony Boucher in his corner.

In his short, but snappy, reviews for The San Francisco Chronicle, Boucher praised The Whitebird Murders as "one of the better recent hardboiled debuts" and marked The 3-13 Murders (1946) as "a far above average hardboiled novel" with "good dialogue, credible toughness, solid plotting" and "plentiful excitement." I'm an aficionado of, as Boucher calls it, the simon-pure jigsaw-puzzle detective story, but Rex Stout and Bill Pronzini have given me an appreciation for that stylish, incorruptible voice of the hardboiled gumshoe – who prowl those mean streets in fedoras and trench-coats. I remember someone describing them as a modern-day knight's quest or realistic superhero stories about capeless crusaders, but I believe this genre is at its best when there are plots to go with the stories.

So, needless to say, Boucher's review, short as it was, caught my eye and he didn't overstate the merits of the book. The 3-13 Murders proved to be one of the best, if not the best, hardboiled detective novels I have read.

Al Delaney is a private-detective for the Redman Detective Agency in the fictitious Chancellor City, but when his boss, Giles Redman, was murdered he took over the agency. However, Delaney had refused to remove his name from the frosted glass door and honored his memory with "a wall-hung Indian head" and a large photograph of Redman. The picture and wooden head are flanked by "photostatic copies" which explained "the fate of the persons responsible for his death." And this unfortunately spoiled the name of his murderer.

Delaney has the looks of a streetwise, hardboiled gumshoe, whose nose had been beaten crooked with a blackjack and "one cheekbone was scarred" where "a hopped-up knife artist" had tried "to carve his initials," but behind this face is a brain. And there's even a decidedly Sherlockian element present in this series. Delaney has his very own Wiggins. A newsboy, Bill Smith, who helps him here with proving an alibi. Delaney tells to the reader that, if ever had a kid, he hoped the child would have "a full measure of Bill's quickness, loyalty, born-in-the-bone courage and honesty."

The 3-13 Murders begins when Ray Vance, a news hawk, phones Delaney from the brownstone of a prominent member of Chancellor City's upper-crust society, Fred Tolsi, who has a dead dame in his home with her throat cut – only problem is that nobody has any idea who she is. Tolsi claims to have been at the theater at the time of murder and gives Delaney a two-thousand dollar retainer to get him out of this jam. So he begins by trying to prove his alibi, but also follows various leads that bringing him from a low-end, crime-ridden neighborhood, simply known as the Row, to the thickly wooded hills of the city limits. Delaney always takes a Yellow Cab. 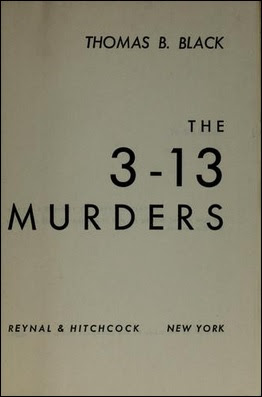 One of the leads brings him to a Yogi-ish cult, headed by "The Great I-Give," who promotes flexibility as a mean to salvation, because Delaney found a copy of their newspaper, The Prophet, in the brownstone. There was also a drab-looking woman walking up and down the street to peddle the newspaper at the time of the murder. Or what about the fat, yellow-faced man in a long green coat who Delaney bumped into when he arrived at the home?

However, this merely the beginning of his problems. Fred Tolsi's elderly neighbor, Mrs. Brant, is brutally murdered with a shotgun blast to the face and Delaney gets another client, Helen van Nesst, who hires him to retrieve a diamond her husband, Sheridan, lost when a card game erupted in a brawl – most of these leads are directly tied to the criminal activities in the Row. Fascinatingly, the story is set during a period when there was a stigma on illegal narcotics even among the common criminals of the Row. They are terrified of what could happen to the Row, if the Fed ever gets wind of it.

Naturally, they hardly allow this possibility to hamper their activities, but Delaney has become a liability and eventually has to deal with a hired gun from out of town. A girly-faced hit-man, "The Boston Kid," who has a final confrontation with the gumshoe that could have been a scene in a Western.

The 3-13 Murders is, until the ending, an expertly paced, well-written and characterized, but fairly regular, hardboiled detective novel. And then Black begins to unravel the solution to the whole case, layer by layer, which turned out to be more complex than it appeared on the surface. When I was trawling the web for background information on Black, I came across a review of The 3-13 Murders that ended with the advice to "take a deep breath." Oh, boy, he was not wrong.

The identity of the murderer took me by complete surprise and one of the murders was revealed to have been a gimmicky, quasi-impossible crime reminiscent of John Rhode. You can even make a case that the first murder was somewhat of a locked room mystery. There were more clues here than I have ever seen in a hardboiled novel and that included Pronzini!

So, all things considered, The 3-13 Murders is one of the finest and cleverest hardboiled detective novels ever written, which I recommend, unreservedly, to all. Whether you like the simon-pure jigsaw-puzzle detective story or the hardboiled narrative of the lone crusader. You'll get both for the prize of one! So expect it to make an appearance on my best-of list at the end of the year.
Geplaatst door TomCat on 4/12/2019