Rintaro Norizuki is a Japanese mystery writer, a founding member of the shin honkaku (neo-orthodox) movement, who began, like so many writers in this movement, as a member of the Kyoto University Mystery Club – before officially debuting with Mippei kyoshitsu (The Locked Classroom, 1988). One of many Japanese detective novels I would like to see translated in the future.

Norizuki is the current President of the Honkaku Mystery Writers Club of Japan and has won several awards for his short stories and novels, which are heavily inspired and indebted to Ellery Queen.

The protagonist in most of his novels and short stories is his mystery writing namesake, Rintaro Norizuki, who forms a father-and-son detective team with his dad, Chief-Inspector Norizuki. However, this is only a superficial resemblance. Norizuki has garnered a reputation as a purveyor of extremely logical puzzles that can only be solved by logical reasoning. So no wonder our very own Ho-Ling Wong is quite a fan of the series.

Unfortunately, as of this writing, only two of his short stories have been translated into English in the past fifteen years. The most recent translation was the brilliant "Midori no tobira wa kiken" ("The Lure of the Green Door," 1991), published in English in the November, 2014, issue of Ellery Queen's Mystery Magazine and collected in The Realm of the Impossible (2017), which presented the reader with a brand-new solution to the locked room problem – making it the crown jewel of that anthology. Back in 2000s, "Toshi densetsu pazuru" ("An Urban Legend Puzzle," 2001) was translated and published in the January, 2004, issue of EQMM. The story was very well received and was later included in two anthologies, Passport to Crime (2007) and The Mammoth Book of International Crime (2009).

Somehow, "An Urban Legend Puzzle" has always managed to elude me, but finally decided to track down the story in order to relieve my insatiable hunger for more shin honkaku detective stories.

"An Urban Legend Puzzle" has a plot-structure I can't help but associate with G.K. Chesterton's "The Dagger with Wings," collected in The Incredulity of Father Brown (1926), in which the plot is slowly unfolded and dissected during a conversation between two characters. In this instance, Chief-Inspector Norizuki tells his son about a homicide case he has under investigation.

A second-year student in the Sciences Department at M-University, Matsunaga Toshiki, was stabbed to death with an ice pick in a one-room apartment in Matsubara, Setagaya Ward – shortly after a drinking party with other university students broke up. One of the students, Hirotani Aki, forgot her cell phone and returned to the apartment, but she found the door unlocked and the apartment was pitch-black. Aki assumed Toshiki had gone to bed and forgot to lock the door. So she didn't want to wake him up and searched around the apartment in the dark for her phone, before leaving quietly. 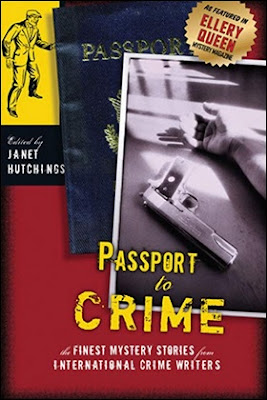 On the following morning, a delivery man found the body of the student lying in "a pool of blood on the floor of the 8-tatami-mat-sized room" and a disturbing message was left in blood on the wall: "Aren't you glad you didn't turn on the light?" Rintaro Norizuki recognizes the phrase from "a popular urban legend" and together they go over who of the students benefited, or were disadvantaged, from embellishing the murder with the urban legend motif. This makes for an interesting and original backdrop. They also test the alibis of the students and go over every possible scenario, which results in various false solutions getting smashed to pieces. And this is a very satisfactory approach to fans of detective stories that fit together like a jigsaw puzzle.

"An Urban Legend Puzzle" is a cleverly contrived, extremely logical story with a solution hinging breaking apart "a solid alibi," but the story is so logical and fair that an observant or long-time mystery reader can easily put the whole thing together – which is the only flaw in this otherwise great story. So not in the same league as the locked room classic "The Lure of the Green Door," but still an excellent specimen of the pure puzzle-plot detective story and the shin honkaku movement. I hope more of Rintaro Norizuki gets translated in the future.

On a final, somewhat related note: I've noticed for a long time that schools, universities and student characters are staples of shin honkaku, but Ho-Ling mentioned in his review of The Locked Classroom (linked above) that they're mainly staples of anime, manga and light novels – because they geared at a younger audience. However, you can still find them in your regular shin honkaku novels. Yukito Ayatsuji's Jakkakukan no satsujin (The Decagon House Murders, 1987) and Alice Arisugawa's Koto pazuru (The Moai Island Puzzle, 1989) has characters that are members of university mystery clubs. Katsuhiko Takahashi's Sharaka satsujin jiken (The Case of the Sharaka Murders, 1983) is a scholary-cum-historical mystery with a university setting. One of Keigo Higashino's series-detectives is an assistant professor of physics.

So I have begun to wonder if this has anything to do with the influence from all those university mystery clubs that have produced so many of shin honkaku writers. Add the Japanese school-culture, with all its problems and ghost stories, and you have all the material you need for a detective story.
Geplaatst door TomCat on 4/18/2019