The Case of the Magic Mirror (1943) by Christopher Bush

Christopher Bush's The Case of the Magic Mirror (1943) is the twenty-sixth entry in the Ludovic Travers series and here the influence of the tough, hardboiled school began to show with its first-person narration by the detective, "the dissolute rich" and "scheming femmes fatales" – changing Travers from a prim intellectual to a genteel private-investigator. However, the plot hearkened back to the more elaborate, Golden Age baroque-style detective stories from the early days of the series (c.f. The Case of the April Fools, 1933). The book even begins with a sporting challenge to the reader. 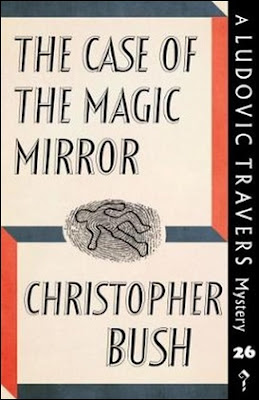 The Case of the Magic Mirror begins in the Spring, of 1942, with Travers recovering from an operation that removed "a lump of shrapnel from a premature bomb." So he has enough time on his hands to tell the story of one of the most unusual murder cases he had been unofficially connected to, but the solution was "so absurdly simple" that some wonder why they haven't "seen it from the very first."

To cement his claim, Travers tells the reader that in the next paragraph is "the germ of that simple solution" allowing you, the reader, "to solve the whole thing well before the last page" and prove your mettle as an armchair detective – which is an excellent example of fair play. Right off the bat, Bush gives away a clue as a freebie! This is exactly why he has become one of my favorite Golden Age mystery writers.

The story Travers has to tell took place shortly before the outbreak of the Second World War, in 1939, but the case has its roots in an earlier swindle affair and a big, headline grabbing 1937 trial. Five men were charged and convicted for fleecing thousands of pounds from race-horse bookies by tampering with the time-stamps of telegrams, which were used to wire bets to the bookies. These convictions were secured with the testimonies of the "socially dubious" Joe Passman and one of the accused, Rupert Craigne, ensuring most of them got "a couple of years apiece," which infuriated one of them, Patrick Sivley – who worked as Passman's chauffeur. And, as he's dragged out of court, he screams he will get them even "if it's the last thing I do."

Enter Joe Passman's stepdaughter, Charlotte Craigne, who's married to Rupert and, once upon a time, she had been Travers' sole indiscretion in life.

Charlotte is completely devoted to Rupert, but financially depended on Passman and suspects he masterminded the bookie-swindling case. So she turns to her ex-lover, Travers, to use his detective skills to dig up dirt on Passman, which she wants to use as blackmail material. So why would Travers agree to take part in this scheme? Charlotte hands him a snapshot of a small boys and tells him its his son! A son she gave birth to after their relationship ended. If he refuses to help her, Charlotte promises him to send his wife all the prove of his bastard son. So he has no choice but to acquiesce.

However, Travers makes plans "to clip the lady's claws" and engages a private-detective, Edward "Eddie" Franks, to not only help him with the Passman end of the swindling affair, but also help him disprove his paternity by identifying the boy in the photograph, which is one of the things that reminded me of the early books in the series – when John Franklin, an inquiry agent of Durangos Limited, assisted Travers and Superintendent George Wharton (e.g. The Perfect Murder Case, 1929). So far, this appears to be a relatively simple, straightforward case, but then the murders happened. And those murders is another thing that reminded me of the earlier books.

Before his fall from grace, Rupert Craigne was a famously conceited actor and, upon his release, he has been making a public exhibition of himself by loudly proclaiming his innocence in public. 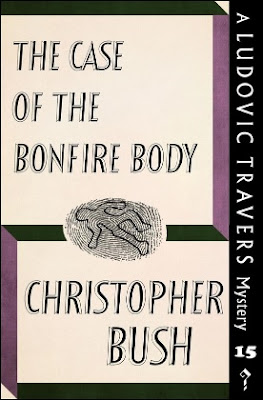 One day, Charlotte gets a letter from Rupert telling her that he's going to a seaside place, called Trimport, to "collect a crowd" and "tell them a few things." Theatrically, Rupert was standing in a small boat addressing the scores of swimmers and the people crowded at the water's edge. A rifle-shot silences the actor as he falls backwards into the sea. Charlotte and Travers witnesses the murder, but the worst is yet to come. When they return to the manor house, the place is crawling with police. Joe Passman has been stabbed to death around the same time Rupert Craigne was shot!

These multiple, closely-timed and tightly intertwined murders were a staple of Bush's detective novels from the 1930s and he got a lot of mileage out of exploring the possibilities this premise has to offer. Some notable examples are Dead Man Twice (1930), Dancing Death (1931), The Case of the Bonfire Body (1936), The Case of the Tudor Queen (1938) and the previously mentioned The Case of the April Fools. This time the murders are complicated when two people go missing: Sivley had been spotted near the house around the time of Passman's murder and this is assumed to have been the reason why he bolted, but the old, dutiful butler of the place, Matthews, appears to have "simply walked out of the house" – vanishing without a trace or reason. Lastly, there the titular mirror, which was taken from the wall and replaced by a framed print.

The Case of the Magic Mirror has all the ingredients of a first-rate detective novel. An intricately-linked double murder plot, a cat-and-mouse game with a dangerous, beautifully characterized dame and personal angle for the protagonist. Travers is not only blackmailed, but circumstances forces him to pull the wool over the eyes of the old war-horse, Superintendent George "The General" Wharton. Always a tricky thing to do. Even more so to someone he respects as a friendly rival and considers to be a friend. Or what about keeping his wife in the dark about his past with Charlotte? Consequently, Travers emerges from this story "a trifle shop-soiled."

In spite of the rich, busy plot with multiple moving parts and a quasi-impossible alibi-trick, the whole scheme was as transparent as a child's lie and this made the intended surprise solution fall flat on its face. However, I have to give props to Bush for the trickery behind the first murder. Some parts of the trick are a little difficult to swallow, which mainly has to do with time and timing, but not entirely impossible to pull off under those circumstances. As an aside, a far more famous mystery writer used a slight variation on this trick in one of his latter, lesser-known detective novels.

So, on a whole, The Case of the Magic Mirror failed to secure a place among the top-rank titles in the series and not recommended to readers who are new to the series, but the close ties Travers has to the case and how he handled it makes it a must-read to fans of Bush.
Geplaatst door TomCat on 4/29/2019