Final Destination: "The Bus That Went Into the Fog" (2018) by Anne van Doorn

My obsessive, unhealthy love affair with the impossible crime story has been well documented on this blog and one of the high spots was unearthing a dozen, or so, locked room novels and short stories in my own language – something that still surprises me to this day. This country has produced detective fiction since the late 1800s, but the traditional, plot-oriented strain of the genre has been consistently dismissed as merely lectuur (popular fiction). 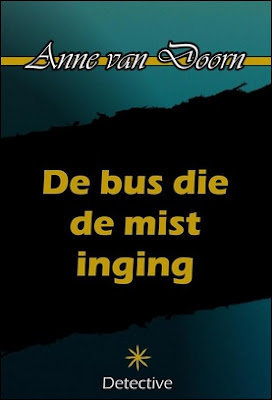 Consequently, an ever-growing list of our earliest detective novels are becoming lost to either history or collectors, because copies tend to be scarce and nobody is reprinting them.

So you can imagine how thrilled I was when I began to find locked room novels among the more easily available titles. Willy Corsari's De voetstappen op de trap (The Footsteps on the Stairs, 1937) has its imperfections, but reading an authentic, Dutch impossible crime novel from the Golden Age made me overlook those minor flaws – such as a vital clue that was withheld from both the reader and detective. Cor Docter's Koude vrouw in Kralingen (Cold Woman in Kralingen, 1970) is a politieroman (police novel) with an entirely original locked room-trick and has a superb, John Dickson Carr-like scene when the murder is discovered that gave me goosebumps! M.P.O. Books' Een afgesloten huis (A Sealed House, 2013) is a modern take on the age-old trope with a brutal murder in a fortified villa protected with steel shutters, cameras and overhead lights activated by motion-and pressure sensors.

Unfortunately, these Dutch locked room mysteries, especially the older ones, are few and far between. Fortunately, M.P.O. Books is still producing impossible crime fiction at a regular, steady pace.

Books debuted in the early 2000s with Bij verstek veroordeeld (Sentenced in Absentia, 2004), introducing the men and women of District Heuvelrug, who appear in an additional seven novels, published over a ten year period, such as the outstanding De laatste kans (The Last Chance, 2011) – one of the finest Dutch detective stories ever written. After the publication of Cruise Control (2014; no translation needed), Books abandoned District Heuvelrug and adopted, what's now, the open penname of "Anne van Doorn" and began working on a brand new series.

Robbie Corbijn and Lowina de Jong are particuliere onderzoekers (private investigators) specialized in dormant murder cases, finding missing persons and impossible crimes. There have been quite a few in this series so far. 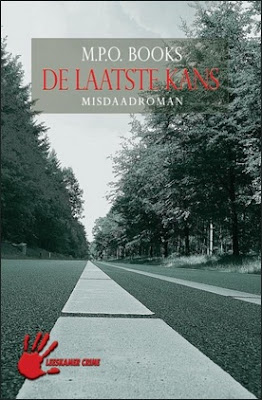 The series began in 2017 with the publication of "De dichter die zichzelf opsloot" ("The Poet Who Locked Himself In," in which a reclusive poet is found murdered behind the locked door and window of a log cabin. Back in December, I reviewed "Het huis dat ongeluk bracht" ("The House That Brought Bad Luck") that has a house plagued by an elusive, seemingly invisible plaaggeest (a tormenting spirit) knocking on the front door before vanishing like a ghost. There are two further stories in the two short story collections: "De arts die de weg kwijt was" ("The Doctor Who Got Lost On the Way") has a locked car problem and the miraculous disappearance of an entire top-floor, while "De bergen die geen vergetelheid kennen" ("The Mountains That Do Not Forget") has an impossible shooting committed in 1933 in a locked tower room – situated in an isolated valley in Northern Albania. On the last day of 2018, "De bus die de mist inging" ("The Bus That Went Into the Fog," 2018) was published and answers the question how a man could have been strangled on a bus without the driver or passengers noticing it.

But before we get to the good stuff, you have to know that, while every novel or short story concentrates on a single case, the investigations can stretch over many months or even years. Corbijn and De Jong have a dozen cases open at all time. De Jong narrates the series and she regularly refers to the files they working on when their current investigation has come to another dead-end. She opens here with an enticing description of a case that had been allured to in a previous short story.

The description roughly translates as follow: "another cold case concerns the remarkable history of a murder in a Belgian coalmine, hundreds of meters underground, while the victim had been alone. As if he had been killed by an invisible person." This story better be ready for publication later this year, because I don't intend to wait until 2020! But back to the story at hand.

"The Bus That Went Into the Fog" tells the story of a murder that has stumped the police for over two decades and began on "a cold, windless winter day" in January, 1996. A "persistent fog" was causing problems throughout the country, but the fog was less dense on the Veluwe and a normally deserted bus platform, in the middle of the woods, becomes the stage of a crafty murderer when a man is killed aboard a small regiobus (regional bus) – connecting the various villages in the region. Every way you looked at the murder, it appeared to be a completely impossible and hopeless case.

The victim is identified as an American from New York, Jason Hunter, but this turned out to be an assumed identity and the autopsy showed he had undergone plastic surgery to alter his face. According to the bus driver, Hunter had been carrying, what appeared to be, a doctor's bag and that bag was not found until the following day in a ditch. The bag was filled with cotton-wool! Even more baffling than the mysteries enshrouding the victim are the circumstances of his death. Hunter had been strangled with a necktie without resisting, but how could this have happened without, in a small bus, without anyone seeing the murder or hearing the murder happen?

Only solution that makes sense if they were all in on it, but consider this unlikely collection of conspirators.

Corporal Paul Overvest occupied the best seat to have committed the murder, but the case against him fell apart. Arnold van Eijs is a factory worker on his back home. Adriana Villerius is an elderly dame (lady) who spend the bus ride knitting and provided an alibi to the last passenger, Martin Goensse, a high-school student whose stamped strippenkaart (zone pass) was found underneath the victim's seat – see the diagram (right) for their exact positions on the bus. So how could the murder have been committed under these circumstances?

The murderer's trick here is "een duivels waagstuk" ("a devilish venture") and delightfully elaborate without becoming incomprehensible, but the impossibility and solution has a weakness I always associate with Jonathan Creek. Thankfully, this weakness isn't used as a last minute twist, sprung on an unsuspected reader, but is uncovered during the investigation. So the focus remains mostly on the how of the murder. A good decision, I think.

The murder of the American, who had been buried as Jason Hunter, remained unsolved for more than twenty years, but then the news reaches Corbijn that the bus driver, Hans Zwartkruis, has passed away. Zwartkruis had been marked as a person of interest by the police, because they were convinced he either knew or had seen something, but he vehemently denied any knowledge or involvement. So now Corbijn wants to talk to his widow in the hope that she wants to talk. Slowly, but surely, Corbijn and De Jong begin to uncover previously unknown information, leads and even a second murder that had been filed away as a solved case of manslaughter.

This part of the story has a color reproduction of two stamped strips from two zone passes, which is one of the main clues to the murder method. An elaborate, deadly stage illusion played out on a mist-enshrouded, regional bus in the middle of nowhere. I think the who was not as impressive as the how, but absolutely necessary to get to the victim and something I can easily forgive, because I really appreciate a well plotted and original impossible problem – which is what "The Bus That Went Into the Fog" gave me. A new take on a classic locked room technique reminiscent of Miles Burton's Death in the Tunnel (1936).

To sum everything up, "The Bus That Went Into the Fog" has a shrewdly plotted impossible murder, but the how of the crime leaned heavily on the who, which failed to give the reader a thoroughly satisfying answer. So the story is best read as a pure, old-fashioned howdunit in a more modern setting and comes very much recommended to fans of the series or locked room enthusiasts.

Finally, I have some good news for the people who have expressed their wish to see this series get translated. One of the (locked room) stories is going to be published in Ellery Queen's Mystery Magazine either later this year or in 2020. I'll post an update when I know more.