The Back Bay Murders (1930) by Roger Scarlett

The Back Bay Murders (1930) is the second detective novel Dorothy Blair and Evelyn Page co-wrote under their shared pseudonym, "Roger Scarlett," which cemented Inspector Kane of the Boston Police as their series-character and had the dubious honor of falling prey to "the most glaring piece of plagiarism ever to exist" – a "word for word copy" surreptitiously published in England. Curt Evans has an interesting piece on his blog about the cover-to-cover plagiarism of The Back Bay Murders in Don Basil's Cat and Feather (1931) with comparable samples. And the plagiarized passages have to be read to be believed. Don had cheek, that's for sure. 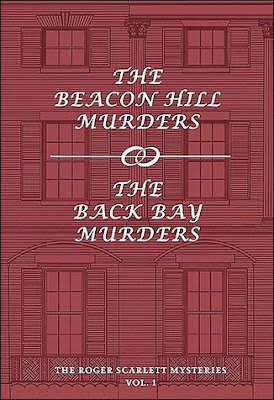 The Back Bay Murders opens with Inspector Norton Kane taking his friend and loyal chronicler, Mr. Underwood, to Mrs. Quincy's reputable brownstone boardinghouse in "the formerly sedate neighborhood of Boston's Back Bay."

Mrs. Quincy caters to solitary individuals, "entrenched in respectability," without immediate relatives and offers them comfort, luxury and human society. Only exception to this rule is Arthur Pendergast, a neurotic young man, who lives there with his mother and he has reported unusual case of housebreaking to the police. Pendergast's room had been ransacked and the floor was stained with thick, reddish brown substance, as if "blood had rained down from the ceiling," but even more curious was the white Persian cat playing in the room with a white feather – tossing it around and pouncing on it. A bizarre scene and Kane promises to let him know if anything turns up.

However, Kane and Underwood return to the brownstone the next day when Pendergast has been found murdered in his room. Someone had slit his throat and a white feather was left on the scene.

Inspector Kane is in fine form as he solves Pendergast's murder in short time and identifies a visitor to the brownstone, Alvin Hyde, as the murderer. Hyde came to the brownstone to deliver a record of Saint-Saëne's Danse Macabre to Mr. Weed and they listened to it together, which is when Hyde got out of the room and murdered Pendergast. But this explanation immediately poses another question: who's Alvin Hyde?

Kane reasons that Pendergast was a neurotic man without friends or acquaintances outside of the house, which means that without "a ready-made, practically self-confessed murderer" the police would looking for his killer among his fellow lodgers. So the murderer blazed a path of evidence leading straight out of the front door of the brownstone. And, had the police fallen for this scheme, they would forever be chasing a man who doesn't exist. A scheme as cunning as it's daring and especially liked the red herring of the faked fingerprints. Just one of the many clever little aspects that make up the plot of The Back Bay Murders.

During the second half of the story, Mrs. Quincy is scratched with a deadly dose of hydrocyanic acid in her bedroom and the circumstances of her death makes it a (borderline) impossible crime.

Hydrocyanic acid causes instantaneous death and her husband, who was in the sitting room next door, heard her fall. The bedroom had second, unlocked door that opened into the hallway (see floorplan), but her husband heard no commotion or anything that indicated that a second person had been present in the bedroom – which is by itself not enough to tag this as an impossible crime. However, the murderer turns out to have a perfect alibi and, as Kane observed, it appeared to be "physically impossible" for this person to have killed Mrs. Quincy. And the explanation is a play on a well-known locked room technique.

So I decided to tag this review as a "locked room mystery" and "impossible crime." Even if it is, technically, only a borderline impossibility. Still, a very nicely done and cleverly conceived murder.

Honestly, I did not expect The Back Bay Murders to upstage its predecessor, because the series would not really find its own voice, namely that of a dark, gloomy yakata-mono (mansion stories), until the next novel, but here the authors were already getting comfortable with themselves – slowly emerging from the shadow of S.S. van Dine. This second mystery has a really knotty, complex plot littered with physical and psychological clues and hints, which range from a leaky roof, broken pieces of (crystal) glass and the psychological makeup of the murderer. There's always a hint of Freud in the Scarlett novels.

The personality of the murderer obviously took its cue from R.L. Stevenson's Strange Case of Dr. Jekyll and Mr. Hyde (1885) and the only drawback is that this made the murderer's identity increasingly obvious as the story progresses.

Nevertheless, everything else was very well handled and showed two mystery writers who were growing and quickly finding their own stride. They would come into full bloom with their next three mystery novels and the result is a lamentably short-lived, but high quality, series of detective stories that simply cannot be recommended enough. Coachwhip and Curt Evans deserve a heap of praise for bringing this series back into print. Because these books belong on the shelves of every enthusiast of the Golden Age of detective fiction.