"The Press, Watson, is a most valuable institution, if you only know how to use it."
- Sherlock Holmes (Sir Arthur Conan Doyle's "The Adventure of the Dancing Men," from The Return of Sherlock Holmes, 1905)

Dorothy Salisbury Davis was an American author of seventeen crime novels, several historical works and numerous short stories. She was one of the founding members of Sisters in Crime and served as President of the Mystery Writers of America in 1956, who declared her a Grand Master in 1985, which were followed by two additional lifetime achievement awards – dolled out by Bouchercon and Malice Domestic. So Davis left her mark on the genre and it all began with a crime/mystery novel that was released on the tail-end of the 1940s.

The Judas Cat (1949) takes place in a small town, called Hillside, which is situated in the Midwestern region of the United States and "the town's chief claim to renown was the annual visit of a famous inventor."

Once every year, the eminent inventor, Henry Addison, descends upon Hillside to spend a day with the town’s recluse, ninety-two year old Andy Mattson, but the inventor passed away several months before the story opened. It was prophesized Mattson "wouldn't live long after Addison went." However, even the speculators of the local rumor mill were unable to envisage the consequences Mattson's death would have on certain members of the community. 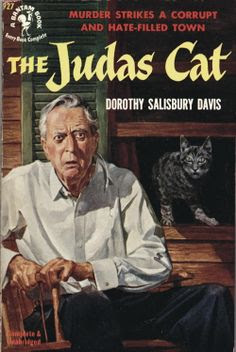 Mattson spent his days on his front porch, "rubbing the soft neck of his cat with his leathery fingers," but his nosey, gossipy neighbor, Mabel Turnsby, was the first one to notice that he "had not taken his customary place on the porch by moon" and saw the cat pacing the length of the window seat inside – looking at her pleadingly "like it was human." She notified the local Chief of Police, Fred Waterman, who broke his way into the home, but had to shoot the crazed, half starved cat in the process. What he finds in the living room makes it very apparent that the cat had some part to play in the tragic death of its owner.

The body of Mattson is found huddled on the sofa, scratches on his face and blood on his white shirt, but the most striking was the terror in the eyes that had been black and fierce when he was alive – as if he had been scared to death. A post-mortem shows his heart had given out. However, the circumstances seem to suggest that the heart attack was not a result of Mattson's advanced age.

Police Chief Waterman finds an ally in Alex Whiting, a young publisher, who took over the Whiting Press from his father, but was more interested, editorially, in the business of the Weekly Sentinel. As a team, they pry open the skeleton-filled cupboard of the old man and uncover many unusual and long-buried secrets: one of them is the surprising discovery of Mattson's furtive occupation as a gifted toy maker.

There were drawers full of hand-crafted, lifelike wooden wind-up figures of animals, people and vehicles. Mattson sold many of his wooden figures to Joe Hershel, owner of a nearby toy factory, but they came with the condition to not patent them and this is potentially of interest since Hershel and the opportunistic mayor, Altman, are talking about expanding the factory – which might give them a reason to get rid of the old man.

Waterman and Whiting also learn Mattson knew his way around a mathematical equation and was a skilled engineer, which made him an adept toy maker and had collaborated with the design of some hydraulic equipment, but problems arose with the filing of the patents. And then there was his unusual friendship with the dead inventor, a missing will and an intricate web of hidden (family) relationships. All of them cast an ever-darkening shadow over the tight-nit community of Hillside. Something that becomes very apparent when the carcass of the dead cat is stolen from the veterinary's office and the laboratory is smashed up.

At one point in the story, Whiting reflects how much their digging is resented by their neighbors, because the resulting "malice and confusion had made them more suspect than the murderer they were trying to find." This aspect of the plot comes to a head during a town council meeting, where Waterman and Whiting are pretty much ordered to drop the whole affair. I think this is by far the best and strongest point of The Judas Cat: the depiction of a small, close-knit town in the United States and the peculiar characters who dwell there. As well as the effect of suspicious death has on them and their response to the resurfacing of long-held secrets. This facet foreshadows the character-driven crime novels that would blitzkrieg across the genre's landscape in the succeeding decades.

Guess this also explains why I ended up disappointed with the detective element of the plot. The problems and mysteries attached to the peculiar circumstances of Mattson's death managed to held my attention throughout the book, but the explanations were very anti-climatic and under whelming. I had hoped on a better explanation for the how of the murder, but Davis stuck with the unsure, hare-brained method to put a notorious coffin dodger out of the way. So no. I was far from impressed with the final tally of the plot. Well, that surely dampened this review, didn't it?

So let me close-out this blog-post by demonstrating some of my amazing deductive reasoning skills: Davis never gives an exact location for Hillside and places the town somewhere in the Midwest of the United States, which is an area comprising of twelve states. Ohio is the only one that can be disregarded, because the story specifically mentioned that the original settlers came from there. So that leaves us with eleven potential candidates, but the (side) characters share an interesting commonality that narrows it down to just one state: a large number of them have Nordic surnames (e.g. Mattson, Thorson, Sorenson, Olson, etc). So there's a big chance Hillside was located in Minnesota, which is where Scandinavian immigrants clustered when they left Europe for the Americas. It could also be in the area where Wisconsin borders with Minnesota, but I think Minnesota is your best bet to find so many people in one spot with Nordic surnames. Especially in those days.

Well, I better put this lackluster blog-post out of its misery here. Hopefully, I'll have something better for the next one. So keep checking back!
Geplaatst door TomCat on 8/15/2016