"He who goes out on the hills to meet the tiger must pay the price."
- Charlie Chan (Keeper of the Keys, 1932)

Carl Wilhelm Wormser was born in 1876, Amsterdam, the Netherlands, and served as a landboard chairman, judicial officer and prosecutor in the Dutch East-Indies between 1908 and 1920, after which he assumed the duties of editor of the Algemeen Indisch Dagblad – becoming the sole owner of the newspaper only a year later. 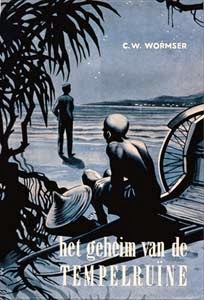 Wormser poured his personal and professional experiences in the East-Indies in three mystery novels under the byline of "Boekan Saja," which reportedly means "Not I" in Malaysian. Handlangers van den dood (Henchmen of Death, 1942) was succeeded by Het graf van den mammom (The Grave of the Mammon, 1943) before Het geheim van de tempelruïne (The Secret of the Temple Ruin, 1946) followed three years later.

The Secret of the Temple Ruin was published in the same year Wormser passed away, however, there are clues in the story suggesting its publication was posthumously. It obviously takes place before my country was occupied in 1940 by Nazi-Germany, but there were references to the Second Sino-Japanese War and that one broke loose in 1937 – a prelude to World War II. I can imagine there were some bumps in the road during this tumultuous period preventing an earlier release. Anyhow... on to the story.

Frans van Haren is a special agent for the Bureau of East-Asian Affairs in Batavia, Dutch East-Indies, and has to gather information on Marcelle Dupont, a Françoise of Indo-China decent, who got herself involved in an international conspiracy to wrench Cambodia from French influence. A move favored by Siam (presently known as Thailand) and Japan. Unfortunately, Van Haren is falling in love, but what follows is not necessary what you'd expect from the premise: it's not a spy-thriller of hidden dangers and double agents, but a stuffily romantic chase mystery across the East-Indies and its neighboring countries. Wormser's talents lay in describing the passing landscapes as Van Haren and Dupont travel through ramshackle villages, tucked away from civilization, and pass through the ruins of a lost civilization, now invested with foxes, panthers and owls, on the back of an elephant – which begs for an comparison with the Australian mystery writer Arthur W. Upfield.

In the vestiges of the ruins is where the secret and titular event takes place: Van Haren overhears Dupont talking to a mysterious Japanese, which isn't very spectacular, but the mysteries until 2/3 into the story are mild to say the least. A friendly spy from Siam is shadowing them and a couple of American missionaries, who speak perfect Dutch with an Amsterdam accent when they think nobody can overhear them. It's the descriptive passage of the journey that's the real eye catcher of the first half of the story and what I found interesting (read: suspected) is that Wormser allowed himself to speak through Van Haren when commenting on the differences between the state of the Dutch and French colonies.

The men from Wormser's generation saw themselves as responsible guardians of the East-Indies, providing health care and education to the indigenous population, provoking comments on the poor state of the makeshift villages they pass through and is surprised to find a school in one of them. Dupont merely points out they have only just began and that it'll be as prospers as the East-Indies one day. This casual conversation may raise some eyebrows today, but you have to remember that during this time people looked at the Dutch, British and French colonies and said: "hey, at least it isn't the Belgium-Congo." [citation needed]

Final quarter of The Secret of the Temple Ruin throws a body into the story and the murder genuinely impacts the story. It ceases to be a mild-mannered, romantic chase mystery in a stiff shirt and the body is that of one of the key players – brutally stabbed to death in a hotel room and briefly teased as a locked room mystery (boo!). The transition from one to the other felt like opening a completely new story, because there's a different detective and this part of the story consists mainly of serial-interviews with all of the suspects. And this begs for a comparison with Ngaio Marsh. The murderer is eventually forced out of hiding in a Perry Mason-style court scene and Wormser allows the story to end a very dark and unusual note. Not a Happy Ending you'd likely see in Hollywood, but it goes to show that not everything written within this genre and time period was about restoring order (see also my review of Herman Heijerman's De moord in de trein (The Murder on the Train, 1925).

Finally, I feel history has been intruding more than usual on this blog and I'll probably be looking for something more conventional the next time.