"Minutes may mean the difference between a good defense and a verdict of first-degree murder."
- Perry Mason

The Case of the Baited Hook (1940) marked the sixteenth appearance by Erle Stanley Gardner's scheming and manipulative defense attorney, the inimitable Perry Mason, since the series' inception in 1933 and begins when Mason is summoned back to the office by a late-night phone call. 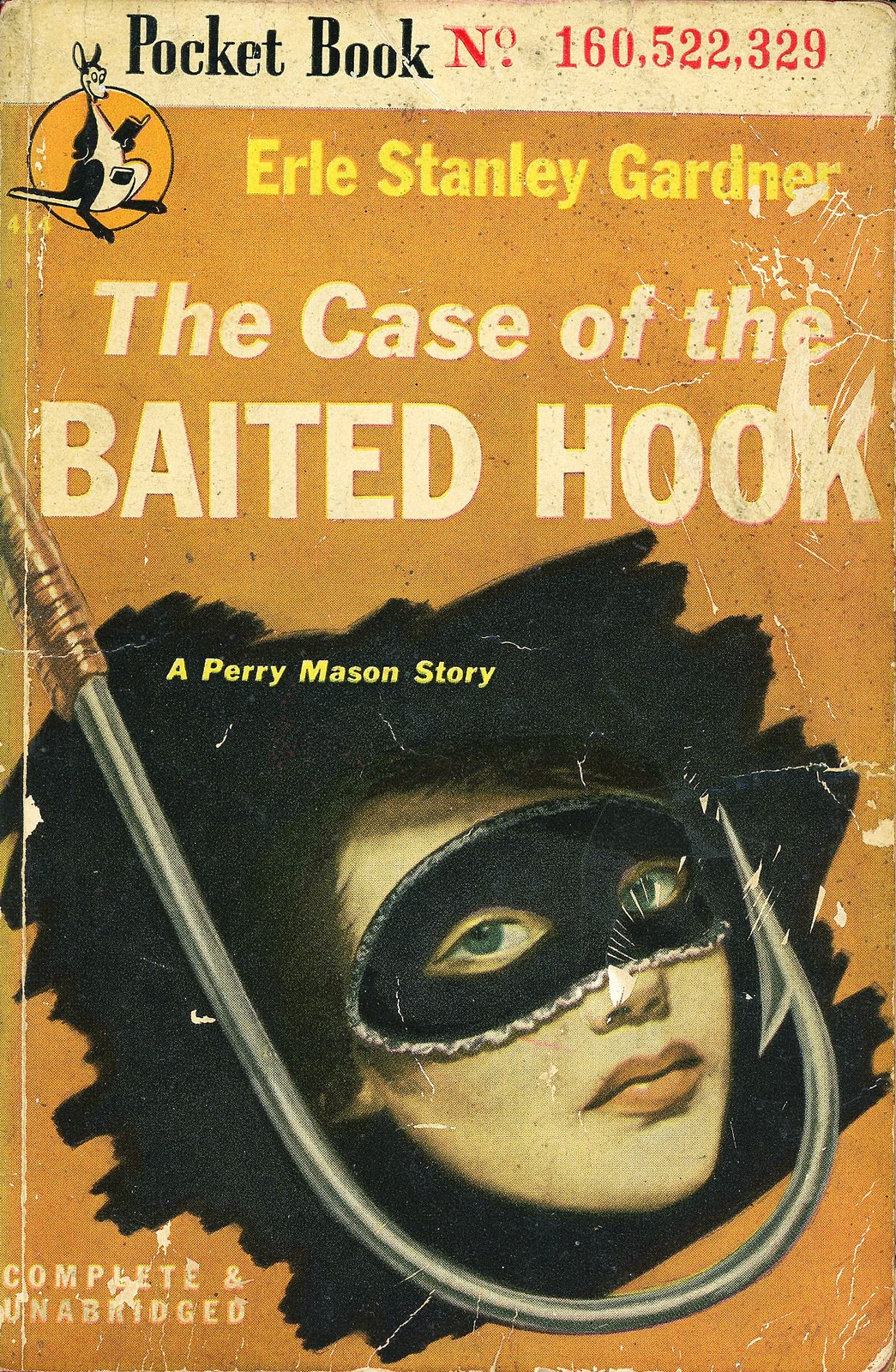 Perry Mason is soon joined by Robert Peltham and a masked woman, completely garbed in an omnipresent, buttoned up raincoat, and Peltham wants her protected from a problem that will probably be all over the news papers the following day – without revealing any vital details of the case. For example: the identity of the masked woman. However, Mason takes the unknown case with an anonymous co-client and receives one-half of a severed $10.000 bill, which he'll receive in full when the woman reveals herself to him by giving the other half of the bill.

Meanwhile, there's another, more assertive, clientele waiting for Mason and Mrs. Trump's problem concerns the welfare of a now grown orphan, named Byrl Gailord, who lost her parents, Russian refugees, when the boat they were on was torpedoed in 1918. Mrs. Trump whisked the girl away and funded her stay in an orphanage home, but they sold Byrl regardless of the funding that was still coming in. Byrl's "mother" remarried after the death of her "father" and when her "mother" passed away, the trustee became her stepfather, Albert Tidings, which doesn't sit well with Mrs. Trump – and not without reason. Tidings' body is found in the bedroom of his bungalow, shot in the chest, without his shoes and lipstick smudges on his face. And thus the plot-threads begin to converge.

I guess one of the allures of the Perry Mason series, outside of the courtroom antics and shenanigans, remains the involvement of Mason himself in the cases and actively trying to influence the course of events – instead of just following them to their conclusion. Mason is always up to something and the reader is (usually) right there to witness it. The first thing Mason does after the phone call in the opening was getting in contact with his private-eye friend/business associate, Paul Drake, to call in a stake out of the street and trace license plates, but Mason really shines when he's treading on thin ice. In one instance, Mason resorts to purse snatching and turns the table on the poor woman when a police officer tries to intervene or when's putting the legal screws on an unwilling witness. There was also a collision between the scheming lawyer and the buffoonish Sgt. Holcombe, in which Mason is threatened to be arrested on the moment The Clarion is about to come with breaking news. Mason's commentary on possible headlines and editorial comments on his arrest were amusing, to say the least, and were reminiscent of the some of the verbal exchanges between Nero Wolfe and the always fuming Inspector Cramer.

As par of the course, The Case of the Baited Hook is a densely plotted affair and I have noted before that lesser, second-string mystery writers could probably have padded several novels with the amount of material Gardner packs into a single story. Interestingly, the manipulation of time was a recurring motif in The Case of the Baited Hook and surfaced in several of the plot-threads – hence the opening quote. Only downside was that there were perhaps too many fingers in the pie to create the kind of case that baffled even Mason for a large segment of the story.

It is, nevertheless, admirable that Gardner's name on a book cover is almost a hallmark guarantee of quality that the detective story you're about to read has an actual plot. Even if it makes those cursed things sometimes difficult to review.

Previously reviewed in this series: