"Every magic trick consists of three parts, or acts. The first part is called the pledge, the magician shows you something ordinary. The second act is called the turn, the magician takes the ordinary something and makes it into something extraordinary. But you wouldn't clap yet, because making something disappear isn't enough. You have to bring it back. Now you're looking for the secret."
- Cutter (The Prestige, 2006)

I have spoken disapprovingly of the people who hailed Paul Halter as the second coming of John Dickson Carr or G.K.Chesterton, because his detective stories, clever and fun as they may be, simply aren't in the same league and it was unfair to place such high expectations on non-French readers, but La Septième Hypothèse (The Seventh Hypothesis, 1991) may very well be a fulfillment of that prophecy – even if it's more reminiscent of Joseph Commings. If you liked The Seventh Hypothesis, you should read "Murderer's Progress," collected in Banner Deadlines (2004), as comparison material. Halter also litters the story with subtle references to Carr's work, which makes for a fun little side game.

On the other hand, Halter made a triumphant attempt in reviving that "Baghad-on-the-Thames" atmosphere of a long-gone London in The Seventh Hypothesis and the opening is a nod to Carr's The Arabian Nights Murder (1936). 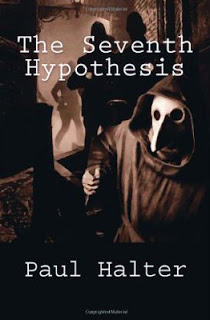 Edward Watkins is a police constable to whom nothing ever happens, until the night of August 31, 1938, when he's pounding his regular beat and catches a fleeting glimpse of somebody robed in the attire of a seventeenth century plague doctor, but the night has more in store for the constable! Not long after seeing the plague doctor, Watkins bumps into a suspicious looking character referring to himself as a Doctor of Crime and appears to be in middle of a body dump, however, upon inspecting the three suspected trash bins, the constable finds nothing that shouldn't be there – such as a body or the proverbial smoking gun. Before saying adieu, Dr. Marcus (a.k.a. D.O.C.) gives Watkins a less-than-subtle hint to delve once more into the bins and actually finds a body in one that he had looked into moments ago! But an even more astonishing feat involves Dr. Marcus and the plague doctors. A couple, the Mindens, who run a seedy boarding house, come forward to report the miraculous disappearance of one of their tenants, who somehow contracted the plague and was carried away by two plague doctors, however, halfway down the corridor the patient simply dematerializes – without any place to hide or escape from.

Interestingly, the problem of the body that appeared out of nowhere and the inexplicable disappearance of the first person to be stricken down with the plague are not the main concern of The Seventh Hypothesis, but one that is brought to Dr. Alan Twist and Inspector Archibald Hurst by Peter Moore – secretary of the noted playwright of twisted mysteries, Sir Gordon Miller. Twist and Hurst listen to the account of Moore that reduces everything up to this point in the story to mere pawns on the chessboard of two devious, but criminally inclined, minds and everyone else is caught in the middle of their schemes.

This is where Paul Halter excels himself as a mystery writer. He leaves his reader with two suspects to pick from and succeeds in leaving you hanging between the two, and subsequently keeps drawing you away from the murderer. Halter has always showed how much he loved playing the grandest game in the world, but here he proved that he can come in first as the undisputed winner. I also love this steady rise in quality, but I think it would be hard to top this one. Naturally, we should not neglect to bury John Pugmire under a mountain of praise for pouring out a regular stream of first-rate translations of French impossible crime stories. I know I can be slow when it comes to new publications, but anything that comes from Locked Room International has top priority.

Oh, the battling masterminds was so absorbing that I almost forgot to comment on, what is after all, a specialty of mine, the impossible crime – and there are two of them in The Seventh Hypothesis. I like to brag that I immediately solved the first impossibility, but than again, having watched a lot of Leverage and Hustle did make it easier than it already was. The second one was a lot trickier and complex, but not bad and what's more important, they were both well explained and properly motivated.

So... I have nothing to nitpick about this time and I think we should all give Patrick the time he needs to get accustomed to that idea. By the way, he also reviewed this book over at his blog. Go read it, if this review wasn't enticing enough. You know what... read it, anyway.
Geplaatst door TomCat on 1/19/2013