"A man will turn over half a library to make one book."
- Samuel Johnson

Contrary to the usual modus operandi of Clyde B. Clason, The Purple Parrot (1937), fourth in the series featuring the meek little professor Theocritus Lucius Westborough, was written from the perspective of one of the characters, Barry Foster, a lawyer who's hopelessly in love with the ward of one of his clients – a rich and influential book collector named Hezekiah Morse.

Morse has hand picked a suitor for his granddaughter Sylvia, a personal friend and next door neighbor, Thomas Vail, and has drawn up a will that effectively disinherits her if she dares to marry anyone else except for a paltry statuette of a purple parrot from New Zealand. 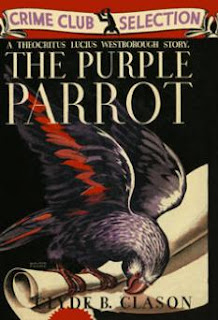 As one of Morse's lawyers, Foster is more than aware of this new development and has decided to confront him, but someone beat him to it and stuck a knife in the old bibliophile! What's worse, all of the evidence seems to be pointing an accusing finger at Sylvia. Morse was stabbed in his study/library and one of the doors was locked from the inside and Sylvia was in the adjoining room holding the only unlocked door under constant observation, but no one was seen either entering or leaving the room (and premise) since their arrival. She also has plenty of motives for wanting her grandfather out of the way.

Luckily, Lt. Johnny Mack, "a bluff, old-school Chicago police detective," owed a favor to that quiet professor of Roman history, Westborough, and gave him permission to follow him around during his next assignment – and he's not convinced of Sylvia's guilt and attaches great importance to the missing statuette of the bird. But why would anyone kill in order to obtain something that isn't even worth the trouble of stealing in the first place? Westborough has a lot of woolgathering to do before he can even begin to disentangle a plot involving, among other threads, a bootlegger and a well stocked wine cellar, a library filled with rare editions and how the psychology of Edgar Allan Poe's "The Purloined Letter" fits in with the ancient tomes stored on its shelves and the life-saving role of Samuel Johnson's A Dictionary of the English Language (1755).

Clason was a writer from the Van Dine-Queen School and his work is exemplary for this school, but The Purple Parrot felt as the most Van Dine-like of his books (The Parrot Murder Case!). Here Westborough isn't visiting an estate to make a discreet enquiry into the disappearance of a jade figurine of a Taoist goddess or descending into a Colorado goldmine as one of the shareholders, but here he plays the Philo Vance to Mack's Markham and with Morse's residence (with its private library full of rare, first editions) as the center of all the action – it really helped establish that Van Dinean feeling. Minus the annoying presence of Vance, but with the insightful tidbits of information and lectures! The part were the police were analyzing the pool of blood and compared it with the witness statement, in order to determine a more exact time of death, was especially interesting and gives the reader a peek through a window in time showing forensic science before the DNA/digital era. 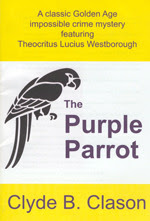 That's why I don't get the solution. I mean, I understand who stabbed Hezekiah Morse, and all that, but not why Clason opted for an explanation that effectively turned an intelligently written story into a gaudy parody of a shilling shocker. This book was published in 1937! What was Clason attempting to do here? By all accounts, Clason was an intelligent man and I refuse to believe that this was his idea of a "spoof" or a "least-likely-suspect"-scenario. I'm even more baffled that it came as a follow-up to a far more convincing solution, and Clason knew it was good, because he retooled it for one of his later novels. Maybe it was challenge to make this particular scenario as convincing as possible or perhaps we're all missing the punch-line of a now long forgotten inside joke.

All in all, I would still recommend The Purple Parrot to fans of the series, but I advice readers new to Clason and Westborough to start off with The Man from Tibet (1938) or Poison Jasmine (1940). The wonderful Rue Morgue Press has made most of Clason’s work available again.

Speaking of the Rue Morgue Press, they haven't updated their website since 2011 (?), but new books were still being published until September of last year. And then it just stopped. I'm aware that this is my own interest speaking, but I hope Tom Schantz will continue to save out-of-print detective stories from biblioblivion for me us to read. They introduced me to Craig Rice, Stuart Palmer, Glyn Carr, Clyde Clason, Torrey Chanslor, and one of my all-time favorites, Kelley Roos. They made collecting Gladys Mitchell actually look easy and inexpensive! We simply can't afford to lose the Rue Morgue Press! Of course, we also genuinely care, but let's face the facts, we're addicts and we need our regular fix! ;)

On a final note, Less Blatt also reviewed The Purple Parrot in one of his weekly audio reviews.