The Lure of Rest

"Deep into that darkness peering, long I stood there wondering, fearing,
Doubting, dreaming dreams no mortal ever dared to dream before;
But the silence was unbroken, and the darkness gave no token..."
- Edgar Allan Poe (The Raven, 1845)

Mr. Arthur Crook is looking over the Record on the morning of April 14, 1947, when an advertisement, under the header "Rest and Refreshments," beckons his attention and gives a translation in his own words: "Rich dame wanted as sole payin' guest in a house in a lonely wood. No one else allowed over the threshold." Mrs. Emily Watson has read the same ad and is our damsel-in-distress in Anthony Gilbert's Die in the Dark (1947). 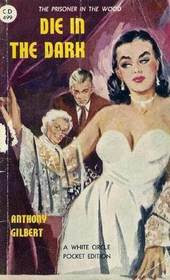 Well, I have to admit, Mrs. Watson, a fifty-year old widow, doesn't match the image of a tormented maiden, kept imprisoned in a crumbling manor home, but that doesn't make her ordeal any less excruciating. Mrs. Watson has excellent reasons to assume that the people nearest to her are plotting to siege control of her estate, claiming that she has gone soft in the head, and the advertisement in the Record offers a temporary escape – as well as a mean to unsettling the plans of her money hungry nephew. Dr. Forrester and his wife, Mrs. Watson hosts, appear to be nice and understandable people, but before long, she begins to question the good intentions of the Forrester's and eventually even her own sanity.

Die in the Dark shares some interesting similarities with one of Gilbert's previous novels, Something Nasty in the Woodshed (1942), and I almost suspect Dark to be a re-write of Woodshed.
Woodshed and Dark open with a newspaper advertisement, asking respectively for a spinster and a lodger, but they are both meant to lure a rich and lonely woman to a secluded spot. Woods that are reputedly haunted surround the houses. In Woodshed, it's the earthbound spirit of a woman and her ghostly appearance is actually relevant to the plot, while Dark briefly touched upon the parachutists who died over the forests during the war – never found and doomed to wander the woods forever. Something should've been done with that! Of course, once these women realize that they may've been safer had they gone to Camp Crystal Lake, they have to face whatever is lurking there... or being hidden from them. Woodshed explains itself, but Dark has an abandoned, dilapidating cottage, tucked away in the dark forest, where Mrs. Watson makes an unnerving discovery.

The two-part structure of Dark also reflects Woodshed, in which the first section can be read as a suspense story with an open ending and in the follow-up Arthur Crook tidies up the loose ends for the curious – as well as settling the score in his own particular way. Unfortunately, these aftermaths appear to be unable to carry the momentum from the first into the second part of the story, and perhaps that's because the style is a radical departure from the pure, suspenseful storytelling of the previous part. What I liked about the first part of Dark is that you're never quit sure if Mrs. Watson is the victim of a dark plot or of her own delusions and that was lacking in the second half of the novel.

All things considered, this was an engrossing story of suspense and even though it's not a classic example of its kind, you can still loose yourself in it for a couple of hours (only 150+ pages to cover) and I suspect that was Gilbert's plan all along.

Other Anthony Gilbert mysteries I have reviewed: