"Do not allow evil into your heart, it will make a home there."
- Hercule Poirot (Death on the Nile, 1978, the movie adaptation)

It's January 1304 and the inhabitants of Mistleham, Essex, left a turbulent year behind them, in which their Lord Scrope massacred as heretics the members of small religious sect known as the Free Brethren, expounders of the doctrine of free love, and left their bodies hanging in the trees of the forest surrounding a deserted village where they camped out – meant as a dire warning to anyone planning to stir up trouble in Mistleham.

In the intervening time, King Edward I dispatches his dutiful emissaries, Sir Hugh Corbett, Keeper of the Secret Seal, and Ranulf-atte-Newgate, Clerk in the Chancery of the Green Wax, to Lord Scrope's district to restore order and retrieve a golden cross embedded with blood red rubies that he stole from the Templars and promised to the King. There's also the matter of a dagger that was looted from the King's vaults and is currently in possession of Lord Scrope. Corbett and Ranulf have their work cut out for them, but upon their arrival, they learn that a bowman has appeared, going by the moniker Sagittarius, blowing a hunting horn before plucking the string of his longbow felling one person after another in a murderous frenzy. 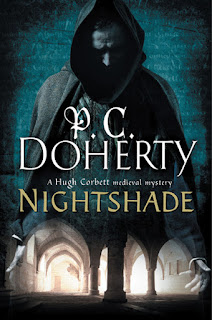 This is the premise of Paul Dohert's Nightshade (2008), a historical mystery novel that’s covered with Doherty's fingerprints as he touched upon everything you come to expect from him in a Sir Hugh Corbett mystery, but like The Mysterium (2010), it's a good example of a story that works well within the formula of the series. Plus the ton of historical information and how fact and fiction are tied together usually makes them an interesting read whether the plot works as a detective story or not.

I'm not sure how relevant this observation will end up being to the review, but I found it interesting how Nightshade displayed nearly everything that I came to associate with Doherty's work. In The Demon Archer (1999), Corbett and Ranulf were send to the estate of the murdered Lord Henry Fitzalan, who was under siege from an avenging bowman known as the Owlman, and both Lord's had a sister in the church whom played an important role in both stories. Doherty also has penchant for constructing plots around war heroes who attempted to blotch out their past crimes, by and large committed on the battlefield, before a shadow from the past catches up with them. In this particular case, Corbett has to find out what happened during the fall of Acre, when Scrope stole the Sanguis Christi from the fallen Templars, before he can officially close the book on these murders. But I have to say, the characterization of the main villain here was a little less straightforward. He was obviously not a very nice man, but you get glimpses of another side of character, for example, his bravery and a restless conscience, presenting a character that choose to be evil in order to obtain his dreams – rather than just being it.

Doherty is also known for his affinity for the locked room mystery, perhaps even being the most prolific mystery novelist on this side of the Atlantic who specializes in miracle problems, and while they aren't in the same league as John Dickson Carr, they can be quite clever – in a simple and straightforward matter. Nightshade has one of those clever, but simple, impossible situations.

As to be expected, Lord Scrope has to answer for his sins at the hands of his self-appointed executioner, but you can’t blame a man from trying escape the cold steel of an assassins blade or a swiftly loosened arrow, and the Lord of the Manor has erected a reclusorium on the Island of Swans – enclosed by thick vegetation and an icy cold moat surrounding it. Guards on the embankment keep an eye out for intruders and the reclusorium can be sealed from the inside.
Doors locked from the inside. Shutters fastened. And no way anybody could've reached the island. But somehow, someone managed to cross the freezing waters without a boat, phase through solid wars and bolted doors like a ghost and stick a knife in the heart of a warrior who didn't put up a fight – as well as leaving an untouched goblet poisoned with the titular nightshade. The solution is not bad and fairly hinted at, but not exceptional, however, it beats the one he offered in Corpse Candle (2001).

Overall, a fairly good yarn and Paul Doherty knows how to spin them!
Geplaatst door TomCat on 1/06/2013