A View of Things to Come: "Death in the Fourth Dimension" (1952) by Charles B. Child 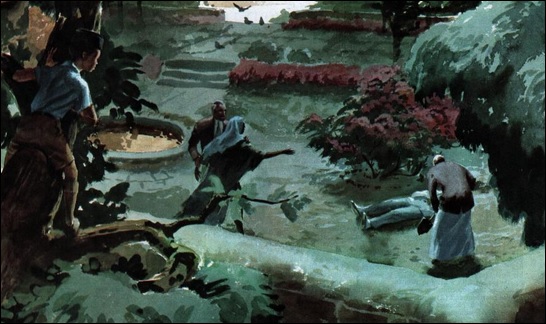 Charles B. Child's "Death in the Fourth Dimension" was originally published in the September 27, 1952, issue of Collier's and collected half a century later in the Crippen & Landru “Lost Classic” volume The Sleuth of Baghdad (2002). This particular short story attracted my attention as it has a premise as intriguing-sounding as its title. And, no, it's not an impossible crime tale.

The story begins with the son of Inspector Chafik J. Chafik, of Baghdad's Criminal Investigation Department, bursting into their little house on the Street of the Scatterer of Blessings with a startling announcement, "father, my father, I have seen a murdered corpse," which is met with a healthy dose of skepticism – since Faisal is known to take "imaginary tales" of Chafik's exploits to school. Inspector Chafik never "subdued three armed men of alarming proportions" nor encountered "a society of assassins whose main activity was to gather at midnight and swear oaths on a bloody dagger," but Faisal's school friends now believe he did. Faisal swears he heard a woman's scream coming from behind the garden wall at the Bayt Kamil Hadi, which is why climbed a tree to see what was happening (see illustration). What he saw was the lady of the house, El Sitt Rejina, who was being held by one of her two brothers, Jamil. The other brother, Ibrahim, was holding a spade and was standing next to a corpse. Faisal assumes the dead man is El Sitt Rejina's prospective husband, Zaki Attala.

Inspector Chafik tells his wife that "the seat of our son's naughtiness is the mind" and "it would be unjust to apply the rod to his other seat, which is innocent." So he decides to take Faisal to Bayt Kamil Hadi in order to show how nebulous his evidence of murder really is. Faisal is shocked to see the man who he thought to be dead and buried was alive and well. Or, as Inspector Chafik put it, "the corpse walked, and furthermore, it mocked me."

So, on the following day, Inspector Chafik has an idea and climbs the same tree to get the same view of the garden as his son and, shockingly, spots "a long narrow mound" that hadn't been there the day before! The body the police digs up with a bullet between his eyes belongs to Zaki and the wetness of his clothes indicates the body had been buried the day before ("always I am haunted by yesterday"). Chafik tells his subordinate "murders have always been three-dimensional," but "this one appears to have been activated on a fourth plane." The personal link to the case makes this murder one of the inspector's most frustrating investigations as it puts a definite strain on his relationship with his wife and son.

Charles B. Child got his start in Collier's, a so-called "slick" magazine, which uses better quality, acid free paper than the pulps of the day, but the slicks and pulps appear to have one thing in common – emphasizing storytelling over rigorous plotting (c.f. Philip Wylie's Ten Thousand Blunt Instruments and Other Tales of Mystery, 2010). Child's "Death in the Fourth Dimension" is regrettably not the bulwark of the Golden Age virtues, you might hope to find based on the premise. So the lack of rigorous clueing and a sporting piece of misdirection can be frustrating, but the storytelling and how everything unfolds is excellent! There's a beautifully orchestrated, rhyming quality to what Faisal thought he witnessed and what Inspector Chafik discovered in the garden the next day. An ending punctuated with a morally ambiguous father-and-son moment in which they become co-conspirators to hush up part of the truth.

Yes, as a detective story, Child's "Death in the Fourth Dimension" lacked the part where the reader can play along as an armchair detective, but that shouldn't take away that it's a very well written, characterized and immensely enjoyable crime story. And it's hard not to like Inspector Chafik. Recommended with the few previously mentioned caveats.

A note for the curious: I previously reviewed "All the Birds in the Sky" (1950) as part of the anthology The Realm of the Impossible (2017) and "The Thumbless Man" (1955) and "The Man Who Wasn't There" (1969) under "Locked and Loaded: A Selection of Short Impossible Crime and Locked Room Mystery Stories."

Email ThisBlogThis!Share to TwitterShare to FacebookShare to Pinterest
Toe-Tags: Charles B. Child, GAD