The 72nd volume of Gosho Aoyama's Case Closed, originally published in Japan as Detective Conan, begins with the conclusion to the massive story that covered nine of the eleven chapters of the previous volume, which brought Richard Moore, Rachel and Conan to London – where Conan becomes engaged in a hunt for Sherlock Holmes-themed clues. A hunt leading him straight to Wimbledon where he has to prevent the public assassination of the Queen of the Grass Court, Minerva Glass. 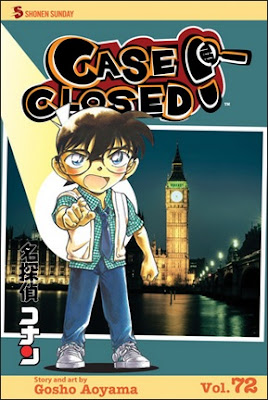 Plot-wise, the last act of this story is pretty standard for the series with Conan having to locate the culprit in a capacity-filled stadium, which has been done before, but the tennis setting provided a way to make this culprit stick out "like a sore thumb." However, the plot played second fiddle here to the main-characters and particular the story-line between Jimmy/Conan and Rachel.

The second story begins with Conan and Anita discussing the former's adventure in England. Interestingly, Anita addresses my complaint mentioned in my review of volume 71.

I can see how it made sense to keep Jimmy's predicament a secret from Rachel when the series began, but, in the story, more than two years have passed and the secret has become a story-telling device to create these needlessly complicated personal situations – keeping Jimmy trapped between Rachel and Conan. Logically, she should have been told by now. Aoyama will probably resolve this problem by saying she knew all along and the final panel of the series will show them with their son who's a carbon-copy of Conan.

Anita reminds Conan what he has said about not allowing Rachel to get too close to him, because not being able to be with him would only make her unhappier. So he can't be in the spotlight and has "to hide in the wings until the right moment," but the brats of the Junior Detective League overheard them and misinterpreted it as a suggestion to play a game of hide and seek. One of them knows an abandoned building, scheduled to be demolish, perfect for such a game. During the game, they get "an emergency earthquake alert" on their cellphones and they hear someone knocking out the emergency-code for "Rescue Needed," which leads them to two shady looking construction workers. Conan concludes "a person in need of rescue" from kidnappers is trapped somewhere inside the mostly empty building.

Generally, I dislike kidnapping stories because they're seldom any good, or memorable, but there are two reasons why this story is one of the exceptions. Firstly, the clever way in which Conan and the Junior Detective League used their personalized cellphones to squeeze out of a very tight corner. Secondly, the identity of the kidnap victim came as a genuine surprise. I honestly didn't expect that twist!

The second, complete story of this volume brings Conan, Rachel and Serena Sebastian to Teitan University, renamed here as Baker University, where Richard Moore giving a lecture, but "he's just drooling over college girls" and a group of Film Majors offers them a more palpable sight – a haunted house exhibition. Students are working on a horror movie as their project thesis and want to make it "as realistic as possible." So they created a house of corpses and want to test it on the girls, because Rachel and Serena have seen dead bodies before. The exhibition does what it intended to do... scaring the girls. 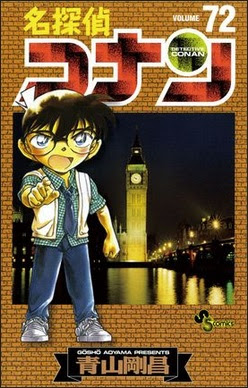 One of the film students, Anna Tadami, is strapped to an operating-table and surrounded by dummy surgeons, but, when they walked pass this scene, she started "trembling and thrashing her legs." She shook so hard "it rattled the bed." Anna Tadami was dead! There's "an almond smell" at her mouth and "the remains of capsule between her teeth," which means suicide as Rachel and Serena saw nobody else standing around the operating-table. So a quasi-impossible crime with an obvious murderer, a hack stage-trick and a motive that felt tacked on resulting in an average story at best.

The third case is another kidnap story, of sorts, but this time without Conan, because he's in bed with a serious cold. Conan was supposed to meet the Junior Detective League at Amy's house to play karuta, a Japanese card game, but, when Conan is video chatting with them on his cellphone, a young boy knock's at the door of Amy's department – screaming that there are "bad people" he doesn't know in his apartment. Masao is a boy with a reputation in the apartment building for playing pranks and telling lies, but cries he doesn't know the man and woman who introduce themselves as his parents. And he's dragged back into his apartment. Conan tells them to call the police, but they decide to investigate Amy's neighbors for themselves.

At the heart of the story is a coded message Masao surreptitiously sends under the nose of the culprits to the Junior Detective League over a game of karuta, but this is one of those language-based codes. So practically unsolvable for most non-Japanese speaking readers. Not a bad story, but a pretty minor one.

Sadly, the last chapter is the beginning of new story that will continue in volume 73 and the premise is intriguing, to say the least! Richard Moore is hired to protect the matriarch of the Hoshina family, Rukako Hoshina, who's obsessed with clocks and the ancestral manor house is ticking to the brim with clocks – even has a clock tower. Rukako Hoshina received a death threat accusing her disrespecting "the flow of time" and she'll die at the time she "came into this world." The letter was signed with the moniker, The Guardian of Time. I can't wait to read the rest of the story!

So, all things considered, this volume can be summed up as an average entry with only one good story and the conclusion of the London-case as its sole standout moment. I don't think it helped either that it ended with a teaser of a case that already promises to be much better than the three complete cases that preceded it. Oh, well, here's hoping for the best in the next volume!
Geplaatst door TomCat on 2/08/2020