Anton Roothaert was a Dutch lawyer, writer and a pesky gadfly of the Roman Catholic Church, who agitated against "the suffocating influence" of the Catholic Church in the southern provinces of the Netherlands, best remembered today for his streekromans (regional novels) about a clumsy veterinarian from Brabant, Dr. Vlimmen – who appeared in a trilogy of novels. More importantly, Roothaert produced half-a-dozen mystery novels and a stage-play. 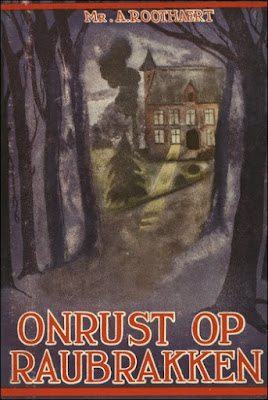 The first four novels, Spionage in het veldleger (Espionage in the Field Army, 1933), Onbekende dader (Unknown Culprit, 1933), Chinese handwassing (Chinese Handwashing, 1934) and Onrust op Raubrakken (Unrest at Raubrakken, 1935), were written during the Golden Decade of the genre's Golden Age. Nearly two decades later, De wenteltrap (The Spiral Staircase, 1949) and Een avondje in Muscadin (An Evening in Muscadin, 1952; co-written with J. Romijn) were published. These two short-lived flings as a mystery novelist was punctuated with Gevaarlijk speelgoed (Dangerous Toys, 1954). A play that reportedly has never been performed on stage.

After all the Danish, French and Japanese mystery reviews, I wanted to return to a Golden Age period detective novel from my own country and began sifting through Roothaert's work.

This turned up two titles, Unknown Culprit and Unrest at Raubrakken, which appeared to adhere to the traditions of their Anglo counterparts and settled on the most traditional-looking of the two, but the story turned out to be more in line with the work of French mystery writers from the early 1930s – such as Gaston Boca, Pierre Véry and Noël Vindry. Going by the French-speaking characters in the book, I assume Roothaert was proficient in French. So it's not entirely impossible that he was not only aware of these early French mystery writers, but might have even been influenced by them.

Unrest at Raubrakken is Roothaert's fourth published mystery novel and has messy, loosely told first half, which was obviously done to cover-up a massive coincidence needed to bring two different sets of characters together.

During the opening chapters, the reader is introduced to small, shady group of people who had to scramble in a hurry to escape from the Belgian gendarme. One of them is a 19-year-old woman, Annebet van Asseldonck, whose older brother, Loe, is part of the gang, but she had no idea what they were up to in that blacked-out room in the house they had rented. One day, Loe told her she had five minutes to pack and not to leave a scrap of evidence, because they were going to the Netherlands, but, in the pell-mell, they got separated and she was left behind with the crusty Dekema and amorously-minded Maurice – which made her think "she was surrendered to the Turks." So she gave them the slip and took along a mysterious briefcase.

A midnight game of hide-and-seek in a dark, damp forest brings a cold, hungry and exhausted Annebet to an old country estate, the Raubrakken, on the border with Belgium.

The place is the property of Jan-Karei van Neeritter Eckberts, lord of the manor, but "never a drop of blue blood" was spilled in his bloodline. Jan-Karei is not your typical country gentleman. He's a young, 25-year-old man who prefers to spend the entire day in bed reading hefty tomes on (criminal) psychology, which made me suspect he was going to be the detective of the story. Jan-Karei made some Sherlock Holmes-like deductions in the beginning and even helped capturing one of the gang members. 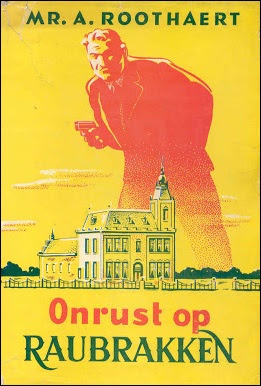 Maurice turned up at Raubrakken, out of nowhere, under a false name and attempted to scam 15,000 guldens from Jan-Karei, which is close to 145,000 euros in today's money. Or nearly 165,000 dollars for you Americans. But he astutely spotted the flaw in a falsified document.

However, the detectives turned out to be two policemen, Inspector Piron and Deputy-Inspector Fluyt, of the Centrale Opsporingsdienst (Central Investigations), who can get to work when the book finally begins to resemble a proper detective story – which is somewhere around the halfway mark. Maurice makes a spectacular escape from his prison cell. Jan-Karei receives a warning letter requesting the return of a wallet and a bullet is fired through the window of his library when he was having guests. And the next day, the library becomes the scene of a seemingly impossible murder!

First of all, I swear I had absolutely no idea Unrest at Raubrakken was going to turn into a full-fledged impossible crime story towards the end. I was completely taken by surprise, but oh boy, what an impossible crime!

One of Jan-Karei's house-guests is a Dutch-American retiree, Mr. Weider, who's sitting in an armchair in the library when a shot was fired through the broken window, but the shooter outside had to be trapped, because every exit was either blocked, locked or under observation. Piron and Fluyt were two of the eye-witnesses who swear the shooter could have escaped without either being captured or seen. So how did the murderer manage to "immediately vanish like a ghost" after firing the kill shot?

I unreasonably love this trick! An open-air locked room with an explanation reminiscent of John Rhode, which cleverly reinvented an old idea, but what made me love it is how incredibly Dutch it was. On top of that, the shooting is expertly hitched to a very nifty alibi-trick.

Unfortunately, the elaborate trick and impossible murder are the only really good aspects of the story and plot. The story telling is everything but smooth. The characterization is paper-thin even by my standards. The murderer stood out like a sore thumb and clueing was kept at a minimum, while Piron limited his detective work to uttering cryptic remarks and finding those few clues needed to reconstruct the murderer's trick. A very good trick, but was it enough to save an otherwise mediocre mystery novel? Well... sort of.

All things considered, Unrest at Raubrakken should have been a resounding disappointment, but the unexpected, surprisingly good and typically Dutch locked room-trick was, as we call it over here, a goedmakertje (a small compensation) – which makes it impossible for me to hate this book. What can I say? Sometimes, I'm very easy to please. This is one those times.
Geplaatst door TomCat on 4/26/2019