Previously, I reviewed volume 69 of Gosho Aoyama's Case Closed, a long-running Japanese detective anime/manga series published in the non-English speaking world as Detective Conan, which is littered with often original, cleverly contrived locked room and impossible crime stories – some of these stories are absolute gems. So, with the release of volume 70 earlier this month, the time had finally come to slap together a best-of list. I managed to keep my list limited to five stories that impressed me for various reasons. 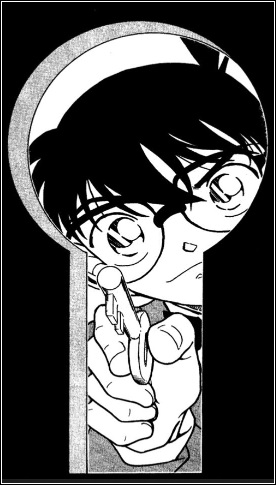 My first pick is known as "The Mist Tengu Case," collected in volume 11, in which Conan Edogawa solves a seemingly impossible murder in a mountain temple haunted by the titular Tengu. A long-nosed goblin who is held responsible for hanging a priest from a beam inside a small, but tall, wooden temple tower with unscalable walls. The locked tower-trick is as ingenious as it's original, but one that only works and is acceptable in comic book format. Still a highly recommendable story with a good plot and setting.

The next story is "The Loan Shark Murder Case," collected in volume 15, which has one of the best and cleverest poisoning-tricks of the entire series.

A loan shark is poisoned with potassium cyanide in his office. However, the whole building had been secured from the inside and everything is tested for traces of cyanide, such as the money the victim had been counting, but without result – until the brilliantly titled chapter, "The Devil's Summons," reveals the trick. A devilishly simplistic, but oh-so effective, trick that makes this story a minor locked room classic.

"The Magic Lovers Case" can be found in volume 20 and brings Conan to a snowbound lodge, where an online group of magic enthusiasts have gathered, but dark magic seems to be at work when a member of the group is murdered under apparently impossible circumstances. His body is found outside the lodge, sprawled in the middle of a field of snow, which is virginal and unbroken without a single footprint going to, or coming from, the body.

In my opinion, the no-footprints scenario is the trickiest and most difficult of all impossible crimes to do successfully, because the physical nature of these tricks eliminates misdirection from the equation in most cases and admired Aoyama's unique approach to the problem – a very technical and elaborate trick. These complex tricks work admirably well in the comic book format, because you're shown had it was done.

The next story, "The Detective Koshien Case," is spread out over two volumes, 54 and 55, which is somewhat of a landmark story in the series.

Conan Edogawa and Harley Hartwell travel to an abandoned house, on a deserted island, to take part in a reality TV special about the "Teen Detectives" of Japan. The participants are the high-school detectives of the North and South, Yunya Tokitsu and Natsuki Koshimizu. Harley Hartwell represents the West and Jimmy Kudo the East, but, since he's there as Conan Edogawa, his place is taken by Saguru Hakuba – who previously appeared in volume 30. This reality show becomes a deadly game when one of the detectives, Tokitsu, is bludgeoned to death in an upstairs room of the abandoned house with the door and windows locked or fastened from the inside.

Granted, the solution reworks an old locked room-trick, but it was a skillfully done job and the whole story felt like a big deal with a strong crossover vibe. And the story has one of the most memorable and likable murderers in the series.

Finally, the list appropriately closes with my favorite impossible crime story, "The Poisonous Coffee Case," which can be found in volume 60. A melancholic, character-driven locked room story with a dark, rainy and noir-ish atmosphere. An immoral TV executive, Raisaku Nakame, is poisoned behind the chain-locked door of his top-floor condo. Evidence at the scene, such as coffee stains, suggests someone else had been in the room after he had died. But how did this person manage to get away?

The original solution to the impossible poisoning is superb and a heart breaker. A genuinely sad story and one of the best stories in the entire series. If you read only one Detective Conan story in your life, it should be this one.

And that brings this filler-post to an end. I want to return to a regular, novel-length detective story for my next read, but might do one more multiple short story review. So... stay tuned to find out.
Geplaatst door TomCat on 4/23/2019