Escape from the Tower

"In fact the way this was worked was so sublimely simple, when I tell you, you'll wonder why you didn't get it in five seconds flat."
- Jonathan Creek (Jonathan Creek Series 2, Episode 2: The Scented Room, 1998)

Several months ago, I reviewed an impossible crime novel, The Weight of Evidence (1978), written by the late Roger Ormerod and noted in my post that he had two other books listed by Robert Adey in Locked Room Murders (1991), but an inspection of his bibliography revealed two overlooked locked room titles - namely More Dead Than Alive (1980) and And Hope to Die (1995). The synopsis of the former immediately caught my attention, because the description of the plot struck me as a prototype of Jonathan Creek. I turned out to be correct. 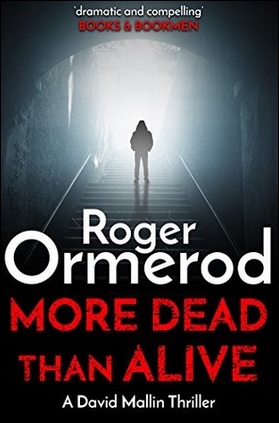 More Dead Than Alive is the penultimate novel about David Mallin and George Coe, a pair of private investigators, who started out as separate series-characters, but formed a partnership after crossing paths in Too Late for the Funeral (1977). The Weight of Evidence was the inaugural case of their partnership and they would appear in that capacity in half a dozen books.

More Dead Than Alive is narrated by the wife of David Mallin, Elsa, who has been staying at a crumbling, drafty medieval stronghold, Kilvennan Castle, which is owned by the husband of an old school friend, Konrad Klein, known as "the greatest escapologist" since Harry Houdini – even celebrated as "one of the world's leading illusionists." But that was a long time ago. The modern world doesn't flock in droves to the theaters to see illusions anymore and magic on television lacks the prestige of the stage, because you can always assume it's "a trick of the camera." So the magician has been laboring diligently, up in his tower room, on dangerous new trick by combining elements of the Sword Box Illusion with the Bullet Catch Trick.

Konrad had constructed a special trick-cabinet, a heavy, carved wooden box on castors, in which his lovely assistant, Amaryllis Moore, had to take place and mere seconds after closing the door he would "fire a bullet through the cabinet at chest height" – from side to side! A very dangerous trick that could possibility revitalize his failing career, but the illusion refused to work and Amaryllis had begun to loose her nerve. The dummies that are being used to the test the cabinet are riddled with bullet holes and she simply refuses to enter the deadly contraption.

So it was not unusual to hear gunshots emanating from the work room, but, one day, a loud crash echoed down from the tower and when they went to investigate they found that the unlocked door would not butch as much as an inch. And the reason? It was blocked by the heavy trick-cabinet. When they finally wormed passed the blocked door, the only thing they found was an open window overlooking "the sea-slicked cliffs” and “the piled waves crashing into the cliff over peaks of rock." A sheer death-drop of several hundreds of feet!

Mrs. Clarice Klein asks Elsa to call in her husband, David Mallin, to advice her what to do about her missing, and now presumed dead, husband, because his life had been insured at the tune of 100,000 pounds. Konrad used to joke he was "worth more dead than alive," but the insurance policy came with a suicide-clause and is non-payable in case the magician took his own life. A fact that places a big question mark behind his disappearance act in the tower as suicide appears to be the only logical answer.

David Malling arrives with George Coe at the ancient castle and they begin to poke away at both the case and the trick-cabinet, which places them at odds with an agent of the insurance company, Martin Fisher – who can expect "a percentage commission" in case of suicide. This is, however, not the case. Once the two private-eyes learn the secret of the cabinet, they come up with a delightful (false) solution explaining how the mysterious disappearance could have been an unfortunate accident. And in that case, the double-indemnity clause is triggered and the insurance company has to cough up 200,000 pounds to the family.

Arguably the best aspect of More Dead Than Alive is all the theorizing and testing of potential solutions to the problem of the tower room, which is largely done by Coe, who emerges her as an enthusiastic, if crude, detective in the Roger Sheringham mold. Coe even credited Edgar Allan Poe's famous 1844 short story, "The Purloined Letter," with helping him find Konrad's hidden drawings and papers about all of his illusions. So there's a definite link with the great detective stories of the past in this 1980s mystery novel. Something that becomes even more pronounced when Konrad's body washes ashore with a bullet wound. 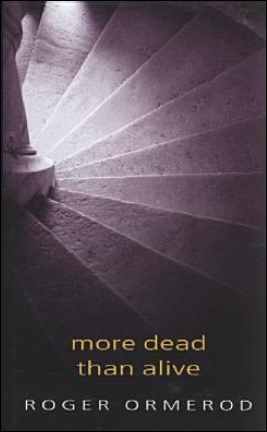 The fact that Konrad was shot to death makes his disappearance from the tower room a full-fledged impossible crime. One way or another, either he had left the room and was murdered elsewhere or his was killed there and his murdered had left the room, but either way they had to pass through a door that was blocked from the inside by a heavy cabinet – which proved to be practically impossible to move, or manipulate, from the outside. Something that was painfully demonstrated when Coe's hand got stuck in between the doorpost and blocked door during one of his tests.

Nevertheless, Coe comes up with a number of possible explanation for the blocked door problem.

One of them is rather practical and shows a method that could be used to leave the room blocked from the inside, while another false solution, based on sound and misdirection, was obviously based on Clayton Rawson's masterly "From Another World" (collected in The Great Merlini: The Complete Stories of the Magician Detective, 1979). However, while Coe was experimenting with various possibilities, Mallin was silently contemplating the case in the background and noticed the significance of the clues provided by the fatal bullet and a test dummy that was found lying beneath the window.

These clues yield an entirely different kind of solution that's not as easy to accept as the other proposed explanations, but, admittedly, it had been wonderfully foreshadowed in the early part of the book. And much simpler in nature than the other explanations. You just have to accept that nobody would notice what was going on right under their very own noses.

That being said, More Dead Than Alive is an imaginative locked room novel that reads like a predecessor of the Jonathan Creek TV-series. I can easily imagine how a slight rewrite, and replacing the detective-characters, could turn this book into a full-fledged Jonathan Creek TV-special. David Renwick would probably have some fun rewriting the final page of dialogue, between David and Elsa, which lends itself to his style of comedy.

So this probably piqued the interest of locked room readers and fans of the Jonathan Creek series, but the book also shares some of the weaknesses of the latter which may turn off some readers. The book is purely concerned with the how of the crime, which the who-and why hinges upon, while the characters populating the plot are (even by my standards) paper thin. You really have to take More Dead Than Alive purely as an impossible crime story, because, as a mystery novel, it's only a very minor work in the overall pantheon of detective-fiction.

Still, as a locked room novel, it deserves to be better known for its multiple (original) solutions and somewhat daring final explanation to the central impossibility.
Geplaatst door TomCat on 8/28/2017