During World War II, a small group of British intelligence officers contrived a strategy with the objective of convincing the Axis Powers that an Allied invasion of the Nazi occupied territories of Greece and Sardinia was imminent, which was done to shift their attention and defenses away from the actual target of the Allies – the Italian-held island of Sicily. A daring piece of deception, which was codenamed "Operation Mincemeat," and the history books show it was a success.

The deception by the Allies was accomplished by simply planting false documents on a corpse, dressed as a downed airman, who had been given a new identity and dumped for this purpose on the Spanish coast. It was an outlandish plan that had been suggested by Lieutenant-Commander Ian Fleming, of James Bond fame, but the idea was not original to him. He had gotten the idea from a detective story. 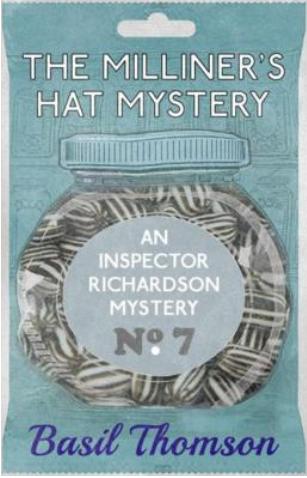 Fleming compiled an inter-departmental note, dubbed by his superior as the "Trout Memo," in which he brought up the following suggestion that was used in a book by Sir Basil Thomson: a body clad in the uniform of an airman, "with dispatches in his pocket," could be dropped on the coast and landed there as a result from "a parachute that failed" – ending on a note that "there is no difficulty in obtaining corpses at the Navel Hospital." The book in question is The Milliner's Hat Mystery (1937) and the plot of the story pits the police of two countries against a gang of international dope peddlers.

The Milliner’s Hat Mystery begins with the inquest on the body of a murdered man, shot through the head, who was found in a barn by a couple of innocent motorists seeking shelter from a thunderstorm. Documents, papers and business cards found on the slain man identify him as "John Whitaker," but the addresses and phone numbers proved to be all dead-end leads.

So the coroner decided "to adjourn the inquest until the police have had time to complete their enquiries" and the time is well used to probe deeper into the case.

A fractured car window is found at a garage, several miles down the road from the barn, which was obviously damaged by a pistol shot. It proves to be the first of a handful of tangible clues that help them to establish the dead man's real identity. A man who turns out to have lived a double life: one as a modest accountant of the Asiatic Bank and the other as an extravagant man of apparently "private means," but it becomes apparent his income did not sprang from a legal source and this appears to be connected to a couple of American gentlemen, a Mr. Blake and Mr. Lewis – every piece of evidence indicates that the dead man may have been "taken for a ride" by them.

However, the most important scrap of evidence is found in a coat pocket, "a milliner’s bill from the Maison Germaine in the rue Duphot," a Parisian hat shop, which states "a hundred thousand francs' worth of ladies' hats" was spent by the victim! It was a clue pointing straight across the channel.

This is the point where the book begins to change into a different kind of story, but, to be honest, The Milliner's Hat Mystery can be categorized under a number of different sub-genres: an early police procedural, a semi-inverted mystery, a mild adventure/thriller yarn and a chase tale, but, in the end, I think it can best be labeled as a story about detectives rather than a detective story. Something that's demonstrated in the policemen who populate the pages of this book.

Thomson's series character, a policeman named Richardson, who was introduced in Richardson's First Case (1933), has climbed the ranks to the position of Chief Constable, but he’s merely a background character here and his contribution to the investigation is limited to rubberstamping Chief Inspector Vincent's trip abroad.

It is Chief Inspector Vincent who the reader follows on his journey, peddling between England and France, as he and his French colleagues attempt to find the two Americans, uncover a corrupt politician and assisted the French authorities in shutting down "another of these poison factories," which, surprisingly, made for the best part of the story. The murder is not as solidly attached to the drug trafficking business as it first appeared and the explanation was poorly handled.

But maybe I'm too harsh about that point, because the plot-threads regarding the drug smuggling business seem to indicate that Thomson did not set out to write a traditional murder mystery. The murder and opening chapters impressed me as a vehicle to explore the problem of drugs, dope pushers and their victims. Usually, these drug-related plot-threads hovered discretely in the background of classic detective stories, such as Agatha Christie's Peril at End House (1932), Ngaio Marsh's Swing, Brother, Swing (1949) and John Rowland's Calamity in Kent (1950), but here it was pushed to the foreground – even showing in one of the characters the devastating effects of a heroine habit.

So, while I would not call The Milliner's Hat Mystery a classic example of traditional crime-fiction, I would recommend the book on the strength of its historical importance. The Milliner's Hat Mystery not only provided an idea to an important mission from World War II, but genre-historians might also want to give it a glance as an early predecessor of the modern crime novel. On top of that, Thomson's writing is, even after eighty years, extremely readable. Martin Edwards noted in his introduction "there is a zest about the stories," which, surprisingly, came from "a man in his seventies." I agree. In this regard, Thomson seems to have been the equivalent of Rex Stout, whose stories from the 1980s were as crisp and readable as those from the first decades of his writing career.

Well, that’s the end of this review and the next one will probably be of something slightly more traditional than The Milliner's Hat Mystery.
Geplaatst door TomCat on 5/26/2016