There Are No Minor Cases

"The deeper one digs, the closer together they are."
- Yor, the Blind Miner (Michael Ende's The Never-Ending Story, 1979)

The Mystery of the Vanishing Treasure (1966) is the fifth entry in a long-running series of fun, adventurous and imaginative juvenile detective stories about The Three Investigators, which was penned by the series creator, Robert Arthur, who only wrote the first ten of the total of forty-three novels – before passing away in 1969. But the general opinion seems to be that he contributed some of the best stories to the series. 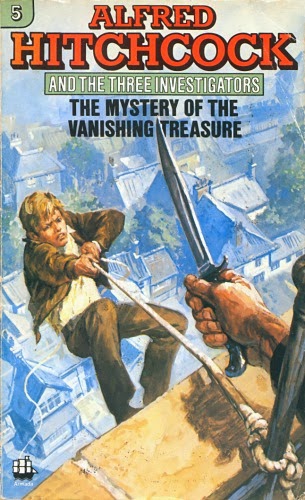 I picked The Mystery of the Vanishing Treasure as my next read from this series on the strength of this particular review and the book delivered on the promise of being a lively, roller-coaster of a tale. It was also a pleasure to learn that there was a seemingly impossible theft from a museum attached to one of the plot-threads, which is where the story begins for the three young investigators.

Pete Crenshaw and Bob Andrews are un-mathematically outvoted, "one to two," by Jupiter "Jupe" Jones to exchange an afternoon of scuba-diving lessons for a trip to the Peterson Museum.

At the moment, the museum is hosting an exhibition by the Nagasami Jewelry Company and the centerpiece of the exhibit is "a special display of fabulous jewels," which comprises of the legendary Rainbow Jewels and an emerald-studded belt of heavy golden plates – which represents a combined value of several million dollars. Jupe is of the belief they could gain valuable experience, for "solving future jewel robberies," by trying "to figure out whether or not the Nagasami jewels could be stolen." However, the only piece of knowledge they can take away from their excursion is that Jupe was not the only person who gave the subject of stolen jewels some thoughts.

The trio of detectives went to the museum on Children's Day and as a result the place is swarming with Boy Scouts, Girl Scouts and Cub Scouts, which causes the place to drown in pantomime and "a bedlam of sound" when the lights are cut and alarm bells began to wail. Security immediately rushes to the center of the room and form a protective ring around the famed Rainbow Jewels, but when the lights come back on they discover that the glass case, which held the Golden Belt, is smashed to pieces – leaving a painfully empty spot where a treasure was displayed only mere seconds ago. But nobody seems to have been in a position to smuggle the belt out of the building.

No one could have slipped out of the back entrance, because "it had been sealed immediately after the alarm sounded" with "a guard posted outside." All of the windows had been bricked up when the place was converted into a museum and "everyone had been searched," but nobody was carrying the belt. The place itself was searched, top to bottom, but nothing was found. Naturally, the boys offer their assistance to the head of security, Mr. Saito Togati, but he dismissed them as "silly American boys" and stated "this is work for men, not for children." It seems they had no other option than letting this case slip through their fingers.

Luckily, they're soon contacted by their friend and mentor, famous movie-director Alfred Hitchcock, who has a problem for them to look into: one of his friends, Miss Agatha Agawam, is a retired author of children's fiction, but recently she has been plagued by the fabled creatures from her own stories – a gang of pickaxe wielding gnomes! They sneak into Miss Agatha's home to throw stuff about and she wakes up in the middle of the night to "the sound of someone using a pickaxe to dig," which seems to come from basement. She also saw the gnomes in her garden playing leapfrog and doing somersaults! 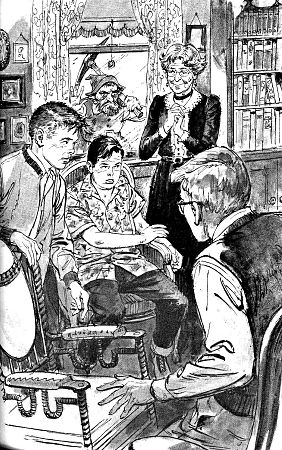 As unbelievable as that sounds, Bob is soon convinced gnomes roam the place as one of them, "wearing a peaked cap" and carrying "a tiny pickaxe over its shoulder," is "scowling ferociously" at him through the window. It is decided that they should hold a nighttime vigil to capture one of them on film or even attempt to catch one of them, but Bob has family obligations. So this ungrateful job falls on the shoulders of the other two and their encounter (and scuffle) with the gnomes must have given some of the youngest readers of this series nightmares.

It's an encounter leading them straight to an abandoned, rundown and bat-infested theatre, which is where Jupe and Pete find both an explanation for the gnomes and a considerable amount of danger – one of those dangerous spots provided an image for the cover-illustration. I really like that cover image!

I’ll refrain from elaborating on the thriller-ish and adventurous parts of the story, which you should discover and enjoy for yourself, but I have to commend Arthur for his excellent and convincing motivation. I guess most of you can probably deduce the true nature of the gnomes and how it related to certain plot-threads, but Arthur uses them to full effect and provides a logical answer as to why there are so many of them in the neighborhood. I thought it made sense.

It's still extremely pulpy and carny, but the good kind of pulp. Like something from a Fredric Brown story.

Finally, there's the impossible theft from the museum, which is most prominently used in the opening and closing chapters of the book, but the truly enjoyable parts of this plot-thread are the many proposed solutions. Before the theft happened, Pete suggested a method echoing Hergé's Le Sceptre d'Ottokar (King Ottokar's Sceptre, 1939) and Jupe's first explanation was a variation on Edgar Wallace's "The Missing Romney," which I read in Murder Impossible: An Extravaganza of Miraculous Murders, Fantastic Felonies and Incredible Criminals (1990). David Renwick used a very similar explanation for the Jonathan Creek episode The Scented Room (1998).

The final explanation for the impossible theft was fairly routine and the false explanations were definitely better, but I won't complain about that, because the overall story was solid and fun to read. So I'll continue to dip in and out of this series for the foreseeable future.