The Fog is Rising

I've been cranking out reviews and filler posts on a semi-regular basis for over four years and received around a dozen offers over that period to accept review copies, which I all turned down. The kind gestures from these publishers were appreciated, but you'll need a smooth talking conman to even make me consider touching a contemporary thriller or something reeking of neo-noir.

Last week, a new and independent publisher, Dean Street Press, was kind enough to send me two e-books that fitted this niche corner perfectly, The Studio Crime (1929) and Dead Man's Quarry (1930) by Ianthe Jerrold, which feature an introduction by Curt Evans – who's still far ahead of me on this trail of obscurity. 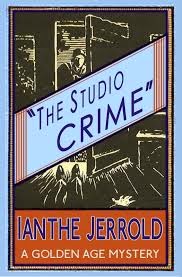 The synopsis and introduction for The Studio Crime is what grabbed my attention and immediately tossed it on the top of the pile. I did "see certain resemblances to Golden Age murder master John Dickson Carr" in the plot summery. How could I resist?

The Studio Crime begins on "a foggy night," as a small party is gathering in the lower floor, studio apartment of Laurence Newtree, where the thick fog inspires the guests to discuss murder and the psychology of its perpetrators. One of them remarks, "it's a bad night for most things," but "a good night for crime." Someone agreed.

Gordon Frew is the upstairs neighbor of Newtree, a collector of oriental rugs and bronze statues, who expected the party to drop by later that evening, but doesn't respond to their knocking. The tightly closed front door is partially demolished to discover Frew slumped over his writing table, garbed in a dressing gown, with a brass knife-handle protruding from between his shoulder blades. There is a back window, wide open, with a drop of several feet on top of a sloping roof of an outhouse, which throws the concept of a locked room mystery out of the window. However, I'll get back to this point in a moment.

Detective-Inspector Hembrow of Scotland Yard is put on the case and finds among the party guests an old friend and ally, John Christmas, who assisted him on several previous investigations such as "the extraordinary affair known as the Museum murder" – in which a journalist was found murdered in the reading room of British Museum. The names of Sherlock Holmes and Dr. Watson are evoked more than once, but I found Christmas and Hembrow very reminiscent of the good natured, woolgathering amateur and the more fact-based, Man of the Yard from the Anthony Berkeley mold. But Christmas said it better:

"I am afraid my methods are not what Hembrow would call sound. The sound detective collects facts and deduces his theory from them. I prefer to create a theory out of the broad characteristics of the case, and then test the facts to see if they support my theory. If they don't, of course the theory falls to ground; and if no other rises from the ruins to take its place, I have to give the affair up as hopeless."

Well, there's an abundance of odd characteristics and seemingly conflicting facts to build multiple theories around, which should keep any armchair detective as occupied as Christmas. First of all, there were the peculiar encounters in the fog with a mysterious man in a fez. You have to wonder if this aspect of the plot influenced John Dickson Carr when he wrote The Arabian Nights Murder (1936) and The Punch and Judy Murders (1937). Secondly, there's a large network of hidden, cross-relationship between the victim and many of the suspects, from a ghost writer to the owners of a rundown antique shop, surrounded with a smorgasbord of 1920s tropes: wills, pieces of papers, lost handkerchief, etc.

However, Jerrold's writing and characterization lifted The Studio Crime well above the average detective yarn from that period, but I just have one problem with the solution – which has to do with the locked front door. Mild spoilers ahead!

The final twist implies the murder of Gordon Frew was an impossible crime, but it was never explained how one of the people involved was able to walk out of the studio and leave the door locked from the inside. I read the book over several days and thought I might have missed or forgotten something, went back and forth. Searched for keywords and reread some parts, but I can’t find it. The door was definitely locked from the inside and it was Christmas who opened it: "...Christmas who, with his arm through the door, turned the key in the lock with a sharp click." So how did that one person manage to leave the room and leave the key on the inside of the door in lock-position?

I encountered a similar problem with Kay Cleaver Strahan's Footprints (1929), which was well written and characterized with an intriguing problem, but the final revelation lacked an explanation for the impossible component of the plot. And they were both published in the same year!

Well, let's end this lukewarm review here, but I'll get back Dead Man's Quarry before long and that one doesn't include an impossible crime for me to get disappointed over, if it isn't properly handled.
Geplaatst door TomCat on 4/25/2015