The Case of the Gold-digger's Purse (1942) is the twenty-sixth entry in Erle Stanley Gardner's Perry Mason series and the opening of the story enmeshed the cunning defense-attorney in a tangle of extortion, theft and murder – which began with a seemingly uninteresting and innocent consultation on gold fish. 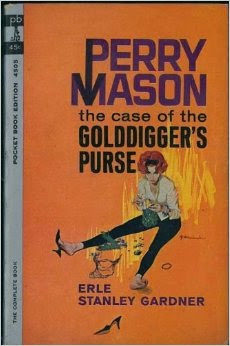 Harrington Faulkner is in the real-estate business, where he amassed a king's ransom, but only cultivated a single passion to spend his dollars on: breeding gold fish.

Faulkner raised a particular strain of Veiltail Moor Telescopes, a gold fish completely cloaked in funeral black and often referred to as the "Fish of Death," but this school of rare fish are suffering from a deadly decease known as gill fever. A young, poor chemist and pet shop employee, Tom Gridley, developed a formula that cures gill fever. However, Gridley is suffering from tuberculoses and should take a break from work to recover, but he can't afford to leave his job and now his beautiful girlfriend, Sally Madison, is extorting thousands of dollars from Faulkner – in exchange for the formula.

A gold-digging extortionist and a bout of gill fever aren't the only plagues pestering the aquarist. Faulkner has had a fall-out with his business partner, Elmer Carson, who slapped a restraining order on Faulkner, which forbids him from removing the aquarium and its content from their shared office.

Mason is reluctant to get involved, but curiosity keeps getting the best of him until he and Della Street are in legitimate danger of becoming accessories after the fact in the murder of Harrington Faulkner. It begins when the office is burgled and the aquarium looted, which gives Mason an opportunity to make some astute deduction about the soup ladle, the pole it was mounted on and the size of the room. By the way, the theft was briefly teased as a locked room mystery.

The gold fish are eventually found, alongside Faulkner's body, on the bloodstained bathroom floor of his home and Mason's typical, almost routine manipulation in murder cases has now dug him a hole for two.

One of the most attractive aspects of the Perry Mason series, as an unabashed neo-classicist, is how densely plotted each novel is. There's barely any fat on the bone, so to speak. The multitude of cross-and hidden relationships and the motives that drives those relationships are often complex, which is exactly the case here, but there's also the physical evidence and how you can play around with that. There's a missing bullet from a previous murder attempt on Faulkner, a half dead gold fish that could indicate the time of death, fooling around with fingerprints and cheque stubs – and the titular purse stuffed with damning evidence.

Mason has to play a tight game of bluff poker and live up to his name as a courtroom magician in a preliminary hearing to prevent a murder trial for the wrong person. The courtroom chapters tended to drag on a bit, but you can't blame craftsmen, Gardner and Mason, for taking the time to work their magic.

In short: a good mystery from a solid series. Hopefully, the next review/blog-post will be substantially better written than this one.

The previous Perry Mason novels I have reviewed: