The Shadow of Civilization

I know, I know. I promised in my previous post activity would slowly resume, which was a month ago, but, naturally, there was another distraction followed by a slight case of reader-and writers block – preventing even some filler stuff from being posted. So no definite promises, this time around, but this was hopefully the last of the prolonged silences haunting this blog. 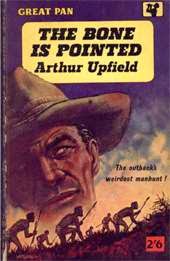 The Bone is Pointed (1938) is the sixth in a series of Australian-set detective novels featuring Detective-Inspector Napoleon "Bony" Bonaparte of the Queensland Police by the English-born mystery writer Arthur W. Upfield. Bony is of mixed blood, a "half-caste," which wasn't as common or accepted back in Upfield's time as it's today, but Bony is presented as a hardworking, intelligent and determined policeman – who moved up the ranks by combining his education with his Aboriginal tracking skills.

The cover blurb of The Bone is Pointed, "the outback's weirdest manhunt," surely promised a more thriller-oriented outing for Bony, but the crux of the problem is that the hunter is being hunted while searching for a missing stockman.

Jeff Anderson is a stockman on the Karwir Station, owned by Old Lacy and his wife, who went missing when checking fences during a heavy rainstorm, but only his horse, The Black Emperor, came back – which could’ve meant he was thrown off by the animal. However, they are unable to find the body and there's no shortage of motives for foul play. Anderson was known as a spiteful, cruel and ill-tempered creature who may have seriously mistreated members of the Kalchut tribe.

Kalchuts are a small tribe of less than a hundred Aboriginals living the tradition lifestyle of the old continent on the neighboring property of Karwir Station, which is owned by the Gordons and they're determined to protect the Kalchuts from the encroaching Western civilization. If they murdered and hidden Anderson, it would certainly mean government interference and the end of the Kalchuts. The relation between the Kalchuts, the crime and their impending doom, if implicated in the crime, reminded me of the relationship between the primitive Marshmen and the ruling class of a fictional sultanate in Peter Dickinson's The Poison Oracle (1974). Anyhow, the case remains unsolved for months and it would've slipped through the cracks of time if it weren't for Sergeant Blake calling in a higher up – DI Napoleon Bonaparte of the Queensland Police.

The trail is several month's old when Bony arrives on the scene, but through observation, interviewing witnesses and analyzing physical evidence Bony is slowly, but surely, retracing the steps of the missing stockman. But that's the easy part. As a half-caste, Bony dresses and speaks like a white man, but this case confronts him that he isn't immune to the believes of his Aboriginal side. Kalchuts are known with the ancient and potent magic of bone pointing, which curses its victim to the unwanted comforts of an early grave.

Unfortunately, the combination of Aboriginal folklore and Upfield's uncanny talent for turning the Australian continent in a living, breathing character of its own somewhat failed to produce the story it should've been, because I was giggling (immaturely) every time someone asked Bony if he was still being boned by the blacks. Or tried to banish the boning from his mind. There was so much forced boning that there must've been blood in his shoes by the end of the book. Leave him alone already. No means no!

So aside from my complete inability to take the cultural slice Upfield offered in The Bone is Pointed as a mature-minded adult, everything worked out well enough in the end with a good, simple, but inevitable, conclusion.

Cake in the Hat Box (1954) is still my favorite, from only the handful of Bony novels I have read, but that Upfield is grossly underrated and criminally neglected as a mystery writer is something I'm starting to become convinced of.

Finally, I'll really make an effort this time to make sure this review doesn't become a drawn-out euphemisms for "see y'all next month."
Geplaatst door TomCat on 10/18/2014