"You're not supposed to root for the criminals."
- Nathan Ford (Leverage, The Frame-Up Job)

The Pot Thief Who Studied D.H. Lawrence (2012) is prefaced with an acknowledgement by the author, J. Michael Orenduff, whose series featuring a shopkeeper and part-time treasure hunter, Hubert Schuze, began in 2009, stating that the book presents a twist on the age-old question on whether a series should be read in order. The Pot Thief Who Studied D.H. Lawrence was written as the third installment, but was shelved during a holiday, rewritten and eventually published two books later. 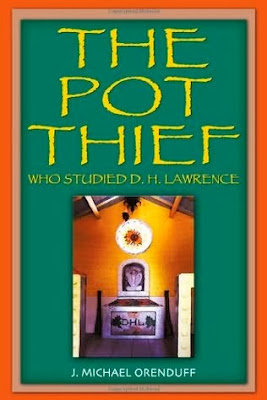 I think whether a series should be read in order is more pertinent today than it was during the heydays of the genre, when a series of detective stories were usually written as stand-alone cases, but the private affairs of the detective have become a popular plot-thread in this era – which can make you feel like dropping in the middle of a story at the beginning of a contemporary crime novel. Bill Pronzini's on-going biography of his Nameless Detective is a notably exception.

Hubert Schuze is a character best described as a literary descendant of Bernie Rhodenbarr, an owner of a second-hand bookshop supplementing his income from the store with nighttime burglaries from Lawrence Block's The Burglar Who-series, but Schuze is more consciences about his activities. The pottery Schuze digs up from the earth were deprived of their owners thousands of years ago, opposed by a law not even nearly that old, and therefore he does not see himself as a thief. Schuze argues that he gives an artifact, buried from human eyes for centuries, back to someone who appreciates it, usually a collector willing to pay big bucks for it, which is not exactly giving it back to the world. If it's in the public domain (so to say), the pottery should be on display in a museum, but Schuze's motives personal and entirely selfless – it must be added. Schuze is supporting his college-going nephew, paying the medical bills for his former nanny and donates to a scholarship fund for kids from the local area.

The failing kidney and looming transplant operation for Schuze's former nanny is actually a pretty good motivation for him to cross the line between excavating a site without a permit and outright thievery, and while it was a deciding factor here, the focus tended to be on Schuze's personal life. That means for the reader stepping in the middle of those embarrassing moments that a relationship completely disintegrates on a personal level.

Anyhow, the task for Schuze here is delivered by an Indian, Cyril Duran, who wants him to retrieve a pot his great-great grandfather, Fidelio Duran, presented to D.H. Lawrence (of Lady Chatterley infamy) as a welcome gift and trade it for three Taos pot from the same era – adding up to a neat, tidy sum in fresh merchandise. The problem is that Schuze doesn't even know if the pot is still at the Lawrence Ranch, high in the mountains, but he happens to have received an invitation to go up there before the request came in, which is too much coincidence according to his mystery novel savvy friend, Susannah Inchaustigui. Unfortunately, it takes them a while to get at the conference and the intervening chapters were a mixes bunch of bits that were either interesting, like Schuze brushing up on his Lawrence, or the exact opposite (e.g. a disintegrating relationship).

I prefer these personal tidbits and ongoing characterization to be briefly interspersed in the main plot of a novel as is done in the stories by Bill Pronzini, William DeAndrea and Herbert Resnicow. The problem I have with the lump of characterization in the middle-section is that it made the second half felt rushed when, upon their arrival at the ranch in a snowstorm, they are introduced to a large cast of characters. Schuze does a memory exercise to remember them all, but, in my opinion, it would've been better if the characterization had been devoted to the people at the ranch – most of whom don’t make it out alive. But then again, I'm not the best person to judge characterization in any contemporary crime novel. Cloaks and daggers is my department.

The first death offers the titular pot-thief an opportunity to play detective and deduces the accidental death/suicide in a bathtub by electrocution is, indeed, murder, and not long thereafter, another guest turns up in the walk-in freezer. Snowbound and beginning to suspect one another, they lock themselves in for the night and have sentry shifts of two to guard the hallways. What else but the lure of an impossible crime can draw me in unfamiliar pastures and while the two-part solution to the locked bedroom are old hats, Orenduff found another way to use them and I appreciate the fact that the locked room trick could've only been pulled off with an open window.

Naturally, these were my favorite bits from The Pot Thief Who Studied D.H. Lawrence (alongside Susannah chattering about locked rooms and detective stories) and wished there was more of it, but there was another thing I found to be an endearing quality that makes up for its short-comings: the whole book impressed me as a very long fan-letter to Lawrence Block and Bernie Rhodenbarr is even mentioned towards the end.

The structure of the plot shares similarities with The Burglar in the Library (1997), in which Rhodenbarr attempts to steal a first-edition copy of Raymond Chandler's The Big Sleep (1939), inscribed to Dashiell Hammett, from the library of a snowbound mansion. Here Schuze wants to lift forgotten piece of work from an important potter, gifted to a famous author, at a ranch cut-off from the outside world by a blizzard. Schuze’s shares a similar friendship with Susannah as Rhodenbarr has with Carolyn Kaiser and Detective Whit Fletcher is like Ray Kirschmann "the best cop money can buy." I rather like the idea that traditions like these still continue within the genre and Poe only knows that if I ever write a detective story, it will be mockingly referred to as "a love-letter to John Dickson Carr."

The post-title is the name of Schuze's pottery store.
Geplaatst door TomCat on 12/08/2013