"The impossible could not have happened, therefore the impossible must be possible in spite of appearances."
- Hercule Poirot (Agatha Christie's Murder on the Orient Express, 1934)

The seemingly impossibility of making something of an enormous size, such as an elephant, vanish from the face of the Earth is one of the time-worn tricks of the stage magician, but not an act often attempted by the members of the impossible crime movement from any era.

Of course, the magician has a marked advantage in that he isn't obliged to point out the sliding-mirrors secreted in the bars of the animal cage, concealing the elephant from the audience without being moved an inch, but the mystery writer has to explain the trick at the end of the ride – which makes it harder to find new ways to make a train disappear between stations. The well appeared to have dried out with the publication of Sir Arthur Conan Doyle's "The Lost Special," a short story from 1898, and Ellery Queen's “Snowball in July,” collected in Q.B.I: Queen's Bureau of Investigation (1955). However, I had been aware of a mystery novel from the 1980s with a different take on the problem and this particular item finally fell into my hands. 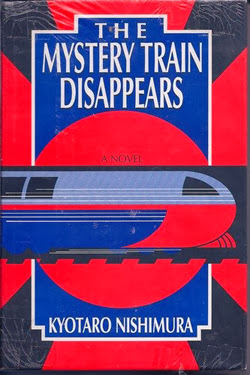 Kyotao Nishimura's Misuteri ressha ga kieta (The Mystery Train Disappears, 1982) is a Grand Caper masquerading as a police procedural and the mark is the Japanese National Railways, who run the one-time Mystery Train. Its destination is unknown, but the J.F.N. promises an entertaining ride. There were only 400 tickets to allot among 8000 applicants and thus The Golden Ticket for railroad aficionados. A day after The Mystery Train departed from Tokyo Station, the director receives a phone-call demanding one billion yen ransom in exchange for their train and passengers. The twelve-sleeper coach from J.F.N. vanished between Kyoto and Tottori, as if it sprouted wings and took off, and they turn to the discreet Inspector Totsugawa from the Metropolitan Police Department – a bland policeman attracted to railway crimes.

What ensues is a chapter-by-chapter struggle with shadows as Totsugawa and the J.F.N. attempt to find the hostages and criminals, which makes for exciting (and fun) reading because every new discovery and development brings a new set of problems for the police. The shadows are due the vastness of the crime, the professional character of the people who executed it and the uncertainty of the amount of people it took to pull off. Totsugawa hopes to capture the criminals and retrieve the ransom money before they can split with it, but they manage to unload the bulk of money from a moving train, in which all the windows were locked and luggage of disembarking passengers searched by the police. This impossibility was better done and more convincingly explained than the disappearance of the titular Mystery Train, however, I tended to still like it because I didn't expect a polished diamond. I was also warned it had its flaws. The bit with the vanishing train is basically text-book stuff, as Jonathan Creek would’ve remarked, but I probably absorbed so many locked room mysteries that I can appreciate new ideas, even if flawed, more than I used to.

If The Mystery Train Disappears faults, it's lacking either a clear, definable opponent (caper-wise) or a pay-off at the ending (mystery-wise), but the Nishimura gave the reader neither and the book ended with a sudden whimper instead of a bang. Its weaknesses stands out especially among the small crop of (better) Japanese detective-and mystery stories translated in English. However, The Mystery Train Disappears is not a completely unrewarding read and there is some genuine detective/impossible material between its covers, but lower your expectations or you'll probably end up feeling disappointed. It's somewhat of a cross between Hilary St. George Saunders' The Sleeping Bacchus (1951) and Seicho Matsumoto's Ten to Sen (Points and Lines, 1958) without reaching the heights of either, but an interesting curio nonetheless.

Finally, I was surprised at the cooperative portrayal of the train-passengers and media towards the police, because I imagine nothing but sneers for the Nederlandse Spoorwegen (Dutch Railways) for outdoing themselves by losing an entire train alongside a few hundred people. And it would be a case of life imitating art, if they ever attempted their own version of a Mystery Train. The US media would probably go in a full, 24/7 meltdown and finally lose themselves in a courtroom, collectively frothing from the mouth, demanding a photo-opt with the bloated corpse the police dragged from the river.
Geplaatst door TomCat on 12/11/2013