One thing I noticed when thumbing through my copy of Brian Skupin's Locked Room Murders: Supplement (2019) is the increase of novels, short stories and TV episodes in which cars, houses, ships, large statues and trains disappear, or reappear, under seemingly impossible circumstances – making them a little less rare than I believed. In particular, the stories about vanishing locomotives and modern, high-speed trains. 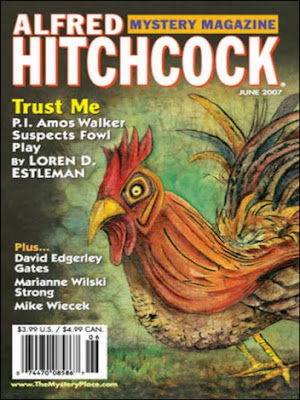 Henry Leverage wrote an early locked room mystery, entitled Whispering Wires (1918), but Skupin listed a second novel, The Purple Limited (1927), centering on the "disappearance of a locomotive from a section of track monitored at both ends." Three years later, John Coryell wrote a Nick Carter novel, The Stolen Pay Train (1930), with a similar positioned impossibility, but there were also two modern-day writers who tackled the problem of how to make a train vanish like a burst bubble. Andrew M. Greeley lost "a rapid transit train between stations" in The Bishop and the Missing L Train (2000) and there's a short, ambitiously-plotted thriller story in which a computer-monitored train with 32 cars "disappeared off the face of the earth."

Mike Wiecek's "The End of the Train" has, as of this writing, only appeared in the June, 2007, issue of Alfred Hitchcock's Mystery Magazine.

"The End of the Train" takes place around the train yards in Newark, New Jersey, where David Keegan has worked for nearly four "tumultuous decades" as a Special Railway Officer. Keegan is now close to retirement and in charge of "two thousand miles of track" crawling with "more vandals, thieves, vagrants, criminal rings, and white-collar fraud" than "anywhere else in North America" – never before had an entire train vanished! One morning, Keegan is summoned to the yard's dispatch center, overlooked by "a 360-degree glass tower," already overflowing with executive limos and police cars.

Train number 432 was en route to Tennebrul, a flat yard in Connecticut, when the GPS equipped locomotive "just blipped out a few miles past Croxton." A nearby maintenance-of-way crew checked a twenty mile stretch of track, but didn't see or find anything. Somehow, "half a mile of rolling iron" had unaccountably gone missing.

Unusually, the train was transporting a dangerous cargo of industrial tankers full of toxic and flammable chemicals to place without much heavy industry. Disturbingly, a multi-million dollar ransom note is emailed to the authorities or they'll "detonate the entire package." This package is the train with its specially assembled cargo that, when detonated with explosives, creates "a cloud of poison" that "could kill people for miles around."

Mike Grost aptly described "The End of the Train" on his website as "an impressive combination of the techo-thriller and the impossible crime tale" and the technological elements are not only the motor and fuel of the plot, but provided the story with a new variation on the one-track solution to make an entire train disappear – which, out of necessity, all run along similar lines. Wiecek's technological spin completely reinvigorated the idea and made it feel fresh again! Add the specialized setting with an inside look at a modern, largely computer operated/supervised train system and you got is a 21st century take on Freeman Wills Crofts.

My sole complaint is that "The End of the Train" is a short story instead of a fleshed-out, full-length novel that took the time to show the reader all the nuts and bolts of the plot. So much more could have been done with the characters, setting, impossible disappearance and the technical-and thriller parts of the story. Nonetheless, Wiecek's "The End of the Train" is still a good and interesting blend of the detective story and techno-thriller. More importantly, Wiecek demonstrated that even in the world of today a train monitored by computers and tracked by satellites can vanish without a trace.
Geplaatst door TomCat on 3/24/2020