Mapping Out a Plan

"It does help the reader relate events to setting, and does so accurately and with a sense of atmosphere. As a combination of decoration and usefulness, it's probably the best of the lot."
- Jack Iams (on the "mapback" edition of his Girl Meets Body, 1947)

I unearthed a spiral-bound book during a minor restructuring of my shelves and it's one of those books I intended to read, but lingered on the pile before being shelved. Well, Piet Schreuders' The Dell Mapbacks (1997) is actually more of a diary posing as a booklet than an actual book. It goes in a few short chapters, fourteen pages in total, over the history of the immense popular and highly collectible Dell Mapbacks – distinguished by their airbrushed cover art and crime maps on the back covers.

Schreuders is a graphic designer by trade and admirably adopted the Dell Mapback style-and trademarks for the compilation of The Dell Mapbacks, which is plainly a labor of love of a collector/fan. The book even opens with What This Book is About ("a series of highly collectible BOOKS published between 1943 and 1953"), Wouldn't You Like to Know ("who murdered the DELL historian, William H. Lyles?") and Persons this Book is about – followed by a dramatis personae and a List of Exciting Illustrations.

Dell Books was brought into being in the middle of World War II when Dell founder, George T. Delacorte, Jr., needed paper to print books and Lloyd Smith of Western Printing & Lithographing wanted printing work, but the most eye-brow raising from this chapter was how these beloved collectibles were abridged or even censored! "Some books were abridged drastically so as to fit Dell's page requirements" and "although the front cover blurb... suggested that the books were complete, they rarely were." And worse: "one compositor, Ralph MacNichol, spiced the house style with his editorial judgment by removing words like Christ, Jesus, and Goddamn." It's good to see one moral arbiter had to foresight to see the possibility of the nazi's eventually opening a North-American branch of the Kultuurkamer and brushed up on his résumé just in case. Hey, I had to raise that petty censorship with a Godwin.

The following chapter concerns the art-department of Dell Books and in particular the work of Gerald B. Gregg, who painted the covers of 212 novels and drew a couple of back covers, and praised for "extraordinary skill with the airbrush which made the Dell covers of the 1940s unique in appearance." True to the nature of a detective story, Gregg was "resorting to the tricks of the time to get the effects" such as pasting a paper doily onto the bottom of a painting (i.e. cover of Fanny Heaslip Lea’s Half Angel, 1946; a romance novel). The Dell Mapbacks reproduces fourteen of Gregg's covers in this book. Another artist mentioned in this chapter is Robert Stanley, who used himself as a model for characters such as Sam Spade, Mike Shayne, Hercule Poirot and Zorro! 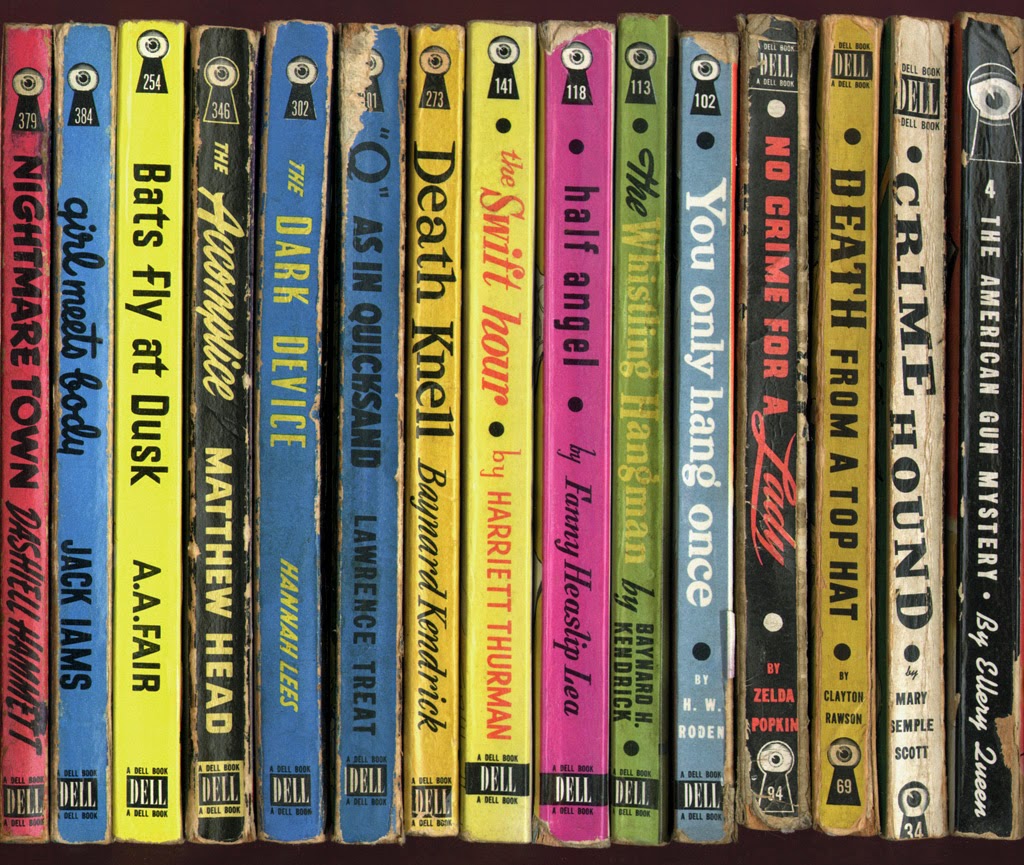 However, it's the crime map on the back covers that stands out as the standard feature among these Dell Book trademarks, and the feature that keeps drawing-in readers, but they probably cost them the most work – from editors and volunteers to map specialists. Something worth mentioning is that Schreuders included two of his own (fake) mapbacks, but they are truly astonishing pieces of art! I especially liked the map showing the location, Haags Gemeentemuseum, of the first international paperback art exhibition in The Hague, in February, 1981. The chapter also notes Dell historian, Lyles, discovered the identity of a prolific crime back artist, Ruth Belew, who drew 150 (or so) in the series.

The historic overview of Dell Books ends on a sad note with the story of William H. Lyles, writer and researcher, who wrote a biography of the Dell Books entitled Putting Dell on the Map (1983) and it's reputedly a meticulous analysis of the stories in comparison with the artwork/crime maps. Unfortunately, there were personal and financial problems for Lyles (resulting in selling-off his entire and complete collection of mapbacks), which ended with him snapping and committing suicide after shooting (and wounding) his then girlfriend in July of 1996. The remainder of The Dell Mapbacks consists of a diary for 1998 and interspersed with replications of front-and back covers of various Dell publications – from mystery and romance to western and science fiction. Flipped through the book again, but it's hard to pick a favorite. Even the simple map of the European Theater of Operation, from the back cover of Eisenhower Was My Boss (1948; Kay Summersby), makes me want to seek out that book.

Long story short, The Dell Mapbacks is an interesting curio and as collectible for Mapback collectors as the original books. And Schreuders included a list of essential reading, if your interest has been piqued on this niche subject.

Yes, I just rambled for more than a full page on what basically amounts to a calendar/diary from 16 years ago, because it had some background info in it about a defunct publisher of detective stories from the 40s. Again: welcome to the niche corner.
Geplaatst door TomCat on 4/09/2014