"It is desirable that you should earn your fees, but it is essential that you feel you have earned them, and that depends partly on your ego."
- Nero Wolfe (The Golden Spider, 1953)

Off the bat, I have to confess that I've never watched a single episode of the 50s private-eye flick 77 Sunset Strip, starring Efrem Zimbalist Jr. as Stuart "Stu" Bailey, a character that originated in the work of the series creator, Roy Huggins, from the late 1940s – resulting in a tie-in novel with stories predating the television series.

77 Sunset Strip (1959) is a compilation of three short stories, "Appointment with Fear" and "Now You See It," published in The Saturday Evening Post, and "Death and the Skylark" from Esquire, fastened together with bridging material. And they're all listed in Robert Adey's Locked Room Murders and Other Impossible Crimes (1991)! But what really slingshotted Huggin's 77 Sunset Strip to the top of my wish list is the comparison in make-up the book has with one of my favorite Bill Pronzini's novels, Scattershot (1981), in which three short impossible crime stories were strung together into a coherent narrative. Add that all up and you'll understand why I had to give in to temptation. 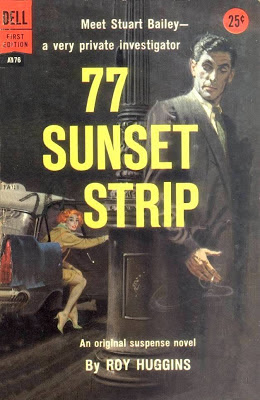 Stuart Bailey's first client is a wealthy one, Glen Callister, harboring suspicious that his wife, Eilene, or the first mate of his schooner the Skylark, Owen Madden, wants to do away with him during their trip to Honolulu and Bailey to accompany them – under the guise of an old business associate. The retainer is five hundred dollars.

Aboard the schooner Bailey has to deal with the advances of Eilene, Madden dropping him after stumbling in on him making out with Eilene and Betty Callister who's excited at the prospect at having a bachelor like Bailey attending her father's yacht party. All this tension accumulates with the prophesized murder of Glen Callister and as they're three days removed from Honolulu in a simmering climate, they’re forced to bury Callister at sea – destroying important evidence. Their actions and almost uniform statements put them in jail for more than a week before Bailey returns to the schooner to reconstruct the murder. I personally would not qualify this as a locked room or impossible crime story, but the method could've definitely been used to create one. This is more a story about a crime, and its effect, than about solving it.

Back in the office, Bailey finds a telegram pleading to meet D.C. Halloran at the Desert Inn, Tucson, Arizona, with a money-order draft for seven hundred dollars attached to it. Halloran turns out to be a frightened woman on the run for "They" and Bailey returns to her dingy, one-room apartment to crash on the couch as a guard dog. There's a wall bed that, when unfolded, reached across the room all the way to the door and nobody, even if you have a key, can enter or leave the apartment when the wall bed is down. Well, you guessed it. When Bailey wakes up the next morning he finds his client sprawled on the floor, strangled, and everything was securely locked from within and the bed was still down! Bailey becomes, not unexpectedly, a suspect on the run after assaulting a police officer and has to find out what happened the night before they catch him again. Oh, and the body also disappears from the locked apartment. Just to make things a little bit more complicated.

The only disappointing part from this portion of the book were all the possibly solutions that shot through my head that went unused. You also have to wonder if Fredric Brown was aware of this story, because the premise of Death Has Many Doors (1951) is very similar. Maybe Brown thought (correctly) that he could improve upon it.

Finally, a phone call summons Bailey to a home in Westwood, where a denial and a sudden exchange of money pulls him in the middle of a murder case. Bailey is introduced as a Mr. Tate to the household and when tea is served the room is plunged into darkness, and when the lights come on, he has yet again lost a client – stabbed with a knife that dissolved into thin air. There were six people in the room, place all shut up, and during a brief moment of darkness a man was stabbed and nobody left the room until the police arrived. But the weapon did not turn up in any of their searches.

The search for an apparent unfindable object is usually associated with Ellery Queen, but I would place Huggings, as a hardboiled writer, alongside Arthur Porges because two of the three locked rooms were firmly grounded in the scientific school – and the problem and solution of the vanishing knife is something straight of a Cyriack Skinner Grey's casebook. This was also the most original one of the three, because Huggings gave for the first two his own particular spin or twist to a well-known trick in the book. Very well done though.

77 Sunset Strip is a fast-paced montage of three cases pitting a street-wise, smart mouthed private detective not just against the dangers that come with the job, but chucking a few brain teasers at him as he's running from situation to situation.