Playing the Grandest Game in the World

"Because we're in a detective story, and we don't fool the reader by pretending we're not."
- Dr. Gideon Fell (The Hollow Man, 1935)

T.H. White carved himself a legacy in English literature with The Once and Future King (1958), a composition of older and some new work forming an epic Arthurian fantasy, but like so many of White’s contemporaries, he was an avid mystery reader in his earlier years – and wound up with an excellent, but mostly unacknowledged, detective novel to his name.

In many ways, White’s Darkness at Pemberley (1932) echoes the one-offs from other literary/academic visitors such as Morris Bishop (The Widening Stain, 1942) and A.A. Milne (The Red House Mystery, 1922). They're intelligently written stories filled with literate characters, but they're also witty and a lighthearted touch makes them fun to read. Where White distinct himself from his colleagues, however, is that Darkness at Pemberley emphatically proved itself to be a superior example from this sub-category and the structure of the plot was (for me anyway) an interesting composite of two eras – turn of the 20th century mystery fiction and Golden Age Detectives. 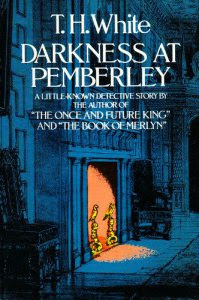 The first part of the book, roughly 90-pages in the Dover edition, is a classic Golden Age mystery and has everything you want from that period, from a multitude of maps and floor plans to a genuine locked room problem. Yay!

St. Bernard's College is the setting for the first act and opens when Mr. Beedon, a history don, fails to meet his colleague, Mauleverrer, and a student for an appointment, but when their knocks is answered with music from a gramophone being turned on, they take their leave – only to hear the next morning that Beedon has died. The history don was found locked inside his room, dead of an apparent self-inflicted gunshot wound to the head, with a gun lying at his feet that's quickly tied to the shooting of an undergraduate earlier that evening. A close and shut case of murder/suicide, or so it appears, but chance, forensics and Inspector Buller's determination throws a monkey-wrench in the carefully planned plot of the killer.

It's a knotty little affair involving a crafty alibi, invisible ink, cocaine addiction and a twist on an old trick to create the effect of the locked room. The trick itself shows that White has read impossible crime stories from a different era, they're crude in principle, but White found another way to apply one of them and the overall result was pleasing. Before the halfway mark, Buller has figured out the identity of the murderer and how the trick was done, but legally, he has not a leg to stand on and after his adversary kills a third person, after bragging about the crimes in a private conversation, Buller quits the force.

Here's a crook in the logic of the book that I can't get over: Buller's motive for giving up his job is obviously hurt pride over his failure to put a homicidal maniac behind bars, but notes that his superiors are also unhappy with him for putting an unsolvable case on the shelves when they had a perfectly good explanation – Beedon shot himself after killing the undergraduate student. But they would've had that case sitting on shelf unsolved because forensics proved it wasn't a murder/suicide and then there's the third murder to consider. It would've required looking into before ending up (officially) as unsolved anyway. Petty nitpicking, I know.

After Buller's early retirement from the force, the book takes a rapid departure from the traditional detective story as the former inspector visits his friend Sir Charles Darcy and his sister Elizabeth – with whom he's secretly in love but doesn't dare to dream due to class difference. Ah, that silly interwar period with their Victorian morals. Anyway, Buller explains to them why he left the police and the somewhat eccentric Sir Charles decides to pop-in on the murderer for a challenge which he almost immediately backs away from, but as Buller predicted, they find themselves beleaguered by a madman who can slip in and out of a guarded house and locked rooms unseen! Leaving a prop skeleton or chalking skulls on a mirror before disappearing again like a puff of smoke. This changes not only the pace of the story, but also goes from an intellectual game of Clue to a deadly variation on Where in the World is Carmen Sandiego? confined to a tightly secured mansion under siege.

This splitting of a novel in two different parts is recalls Conan Doyle's A Study in Scarlet (1887) and The Valley of Fear (1915), but here the two separate sections form one coherent narrative instead of two separate novelettes and the events/tone of the second portion recalled French mystery writers like Gaston Leroux and Maurice Leblanc. In fact, the situation Buller and the Darcy household finds themselves in reminded me a lot of Rouletabille's predicament in Leroux's Le parfum de la dame en noir (The Perfume of the Lady in Black, 1908), in which a group of people locked up in a fortified castle are fighting off a single man endowed with the same cunning as the killer in Darkness at Pemberley. By the way, the killer in this book struck me as a distorted, villainous mirror image of Sherlock Holmes (e.g. the cocaine habit).

All in all, a highly entertaining novel that stitched together Doyle's era of detective stories with those from the author's own time and the great tragedy of Darkness at Pemberley is that it was White's only contribution to the genre. I think Buller in the capacity of an amateur detective, alongside the methods he employed in the second act, would've made him an interesting addition to the genre. Recommended to fans of classic mysteries and old-fashioned thrillers.

And on a final note, I got the idea for the opening quote from this line by Buller, "we shall just have to pretend we're in a detective story." Do you think Fell was reprimanding the inspector in his Locked Room Lecture? ;)
Geplaatst door TomCat on 6/30/2013