During the 1990s and early 2000s, the co-creator of The Kindaichi Case Files, Seimaru Amagi, wrote nine "light novels" in the series and four were translated as part of either the Kodansha English Library or Kodansha Ruby Books, which were intended as an educational tool to help improve the English of Japanese readers – not to dazzle Western readers. Hence, each novel ends with a nearly thirty-page long English-Japanese vocabulary list. 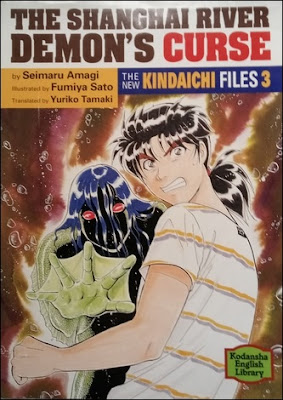 According to our resident expert, Ho-Ling Wong, the English editions enjoyed a long print-run in Japan and there must be "a fair number in circulation," but, in the West, copies have become as rare and elusive as a Kappa. Not quite rare or obscure enough to elude me forever!

Several years ago, I came across Dennō sansō satsujin jiken (Murder On-Line, 1996), which is possibly the first detective novel to use the internet meaningfully in a traditionally-styled mystery complete with an isolated, snowbound setting and ironclad alibis. You can borrow a digital copy from the Internet Archive. Next one that fell into my hands was Operazakan – aratanaru satsujin (Opera House, the New Murders, 1994), published in English simply as The New Kindaichi Files, but the plain, uninspired title hides a classic, first-rate theatrical locked room mystery – translating into my favorite Kindaichi title to date. Ikazuchi matsuri satsujin jiken (Deadly Thunder, 1998) is a very minor, short and somewhat flawed detective story, but you can cross-off some of its shortcomings against an imaginative piece of miniature world-building and an inventive impossible crime. So that left with me with one more title to track down.

Shanhai gyojin densetsu satsujin jiken (The Shanghai River Demon's Curse, 1997) is the fifth novel in the series and the third to be translated, which turned out to be a bit of an odd duck.

The Shanghai River Demon's Curse brings Hajime Kindaichi and Miyuki Nanase to Shanghai, China, where the famous Yang Variety Troupe performs a daily, two-hour variety show at the Mermaid Hall. An enormous ship moored along the bank of the Huangpu River. The main event of the show is an acrobatic underwater act, "The Legend of the River Demon," which is patterned after the tale of a creature that's half-fish, half-human that lives at the bottom of the river. A monster with the ability to curse, or even kill, human beings. In some places, it's considered "bad luck to mock such spirits on stage" like "in Japanese ghost stories."

Following a performance of "The Legend of the River Demon," the director of the troupe, Yang
Wang, is found in his office with a bullet in his head, but his body and the floor are unaccountably soaking – water has "the unpleasant odor of freshwater fish." Even stranger is that the murderer scratched a huge Chinese character for “spring,” a meter wide, on the wall. The first word of the lullaby of the river demon's curse. However, the Shanghai police have a very human suspect in their sights. 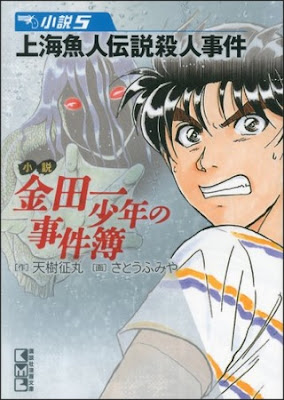 Once the show begins, with "animals like the tiger and monkey roaming around," the door to the dressing room is locked from the inside and it's "impossible for anyone from the audience to get in," which was still locked from the inside when the show ended. Nearly everyone on that side of the door had an alibi except the victim's son, Yang Xiaolong. His young sister, Yang Lili, writes her Japanese penfriend, Miyuki, a distressed letter saying her brother is suspected to have murdered their father. Miyuki decides to go Shanghai to help by bringing her childhood friend, Hajime Kindaichi, who's "the grandson of the master detective Kosuke Kindaichi" and "solved several cases for the Metropolitan Police Department." But his grandfather's name or reputation is not as well-known in China, which is one of the challenges facing the young detective who became a little timid when landed in foreign country for the first time in his life.

When they finally arrive in Shanghai, there are two big surprises waiting in the wings. Firstly, they find Detective Li Boer, of the Shanghai Police, in the company of their friend in the MPD, Inspector Kenmochi. Recently, the body in a decade old murder case was identified and "a small clue" led the Tokyo police to the Japanese director/producer of the Yang Variety Troupe. But is there's a link to the new murder? Secondly, Kindaichi and Miyuki get to witness a second murder during a performance of "The Legend of the River Demon" when a body plunged down from above the stage into the swimming tank. Another bullet to the head and the Chinese character for "summer" was slashed in the victim's back with a knife. So the murderer was intended to follow the grim lullaby.

In spring, the boat is flooded,

In summer, the river turns a murky mauve,

In autumn, the traveler must drink putrid water,

In winter, fish no longer swim but sleep.

These murders also have an element of the impossible as the victims were shot with a derringer, which apparently can vanish, or materialize, whenever it's convenient to the murderer. The part of the ship between Yang's office and the dressing room was locked at the time of murder, which meant that nobody went in, or out, before the police arrived. So nobody had an opportunity to dispose of the gun, but they went over the entire ship with dogs and metal detectors without finding anything. They simply assume the murderer found a way to throw it in the river until discovering the second murder was committed with the same weapon! I've seen two variations on this type of vanishing weapon trick before and hated both of them. This one is marginally better, because Amagi tried to make it somewhat convincing. But the trick is still Yozaburo Kanari. Yes, Kanari's name in this context is a euphemism for shit. 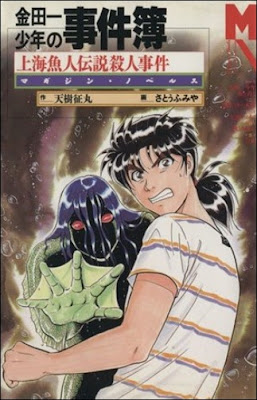 Well, so far, it seems like a fairly standard and typical Kindaichi story with exception of the setting and its effect on Kindaichi's normally cocky attitude, but the story moves away from the series formula in the second-half – turning into a chase story with a coming-of-age angle. Kindaichi helps Yang Xiaolong to escape from police custody and they're chased to Shanghai as they make a run to the Yang's home village. A dirt poor place where the children had to grow up faster in order to make money, which is why Xiaolong and his sister acts so much mature than Kindaichi. But, while their on the run, they both find something of themselves they had either lost or never had. This comes at the expensive of the usual plot structure with the alibis, impossibilities and the nursery rhyme theme of the murders being heavily underplayed during the second-half.

I also hated that during the first-half an intriguing, quickly discarded plot-thread was introduced when Kindaichi learned of a former troupe member, Wang Meiyu, who was a superb swimmer, but a bit strange. Meiyu not only swam really well and could stay underwater forever, but "she only ate aquatic plants and freshwater fish." And it was her talent that lead the troupe to adopt the "The Legend of the River Demon" as their signature act. But then strange rumors began to circulate. Members began to talk that every time she took a shower, the bathroom would "reek of fish" with "large fish scales on the floor." So they began to avoid Meiyu and culminated in her committing suicide by jumping into the river from the toilet window. She left four characters scrawled in blood on the wall and has now risen from "the depths of that murky river" to extract revenge. But the plot-thread was quickly brushed aside. And given an even quicker explanation towards the end. So the only reason why it was even brought up was to give the book a snappy title.

Thankfully, the solution was not all bad with a pretty good alibi-trick and an inspired piece of misdirection, which successfully hid the murderer for a good chunk of the story. I eventually figured it out, because if you how the gun can vanish and reappear, you know who pulled the trigger. Not so good is that other parts of the solution stretches things considerably with an unnecessary, rather cruel twist nearly ruining the whole thing. I mean, this murderer is very likely going to be executed. So why throw that revelation out there? Amagi is the Soji Shimada of the anime-and manga detective story who is nearly unmatched when it comes to erecting grand-scale plots with majestic locked room-and alibi-tricks, but when it comes to characters, sometimes he goes one twist too far. Deadly Thunder has a similar problem.

So, on a whole, The Shanghai River Demon's Curse is not entirely without interest and its break with the formula and foreign setting makes it a worthwhile read to long-time fans of the series, but don't expect anything more than an average detective story. Regrettably, the weakest of the four translated novels.

This more or less closes the chapter on The New Kindaichi Files light novels with such untranslated novels as Yūrei kyakusen satsujin jiken (The Ghost Passenger Ship Murder Case, 1995) and Onibijima satusjin jikes (The Ghost Fire Island Murder Case, 1997) remaining tantalizingly out of my reach. Well, the novels are out of my reach, but not the '90s anime adaptations. So I might make one of those my next stop in the series.