Norbert Davis' Oh, Murderer Mine (1946) is the last hurrah for the unlikely tandem of Carstairs and Doan, but the page-count, 120 odd pages, makes it more of a novella like "Holocaust House," published as a serial by Argosy in 1940, than a novel such as Sally's in the Alley (1943). However, Davis knew how to properly jam-pack those pages, but his series detectives deserved a grander exit.

Doan is a short, chubby private-eye of the half drunk, shabby variety and Carstairs, a fawn-colored Great Dane, has never been able to reconcile himself with the fact that he's owned by a human of such low stock. I have mentioned in my review of The Mouse in the Mountain (1943) that Carstairs' intelligence gives the series a slight nod in the direction of SF/Fantasy territory, but it made the interaction between Carstairs/Doan possible and that is what's most attractive about these stories – even in the face of a weaker plot. 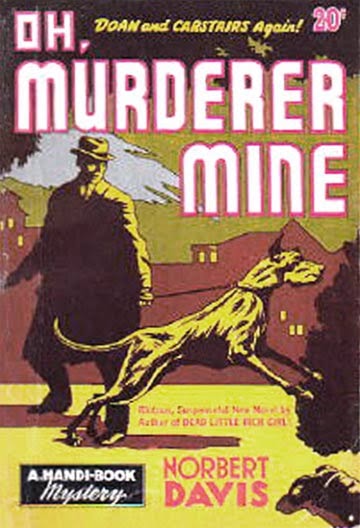 In Oh, Murderer Mine, Doan is hired by "Heloise of Hollywood," whose cosmetic products smear the entire upper crust of Western society, to keep a short leash on her 26-year-old husband, Eric Trent – commercialized in Heloise's ads as "Handsome Lover Boy." Professionally, Trent is a meteorologist and has taken up residents at Breckenbridge University, which means Melissa Gregory (an anthropology instructor) had to give up her office and perhaps even her apartment on the campus ground. I was surprised at this point to find the story shaping up to be college-type mystery, albeit an offbeat one, but than the nightly intrusion happened and were suddenly back in the zany, hardboiled wonderland of Norbert Davis.

The intruder clobbers a screaming Melissa to the floor and fires shots at his pursuers, Carstairs and Doan, who fail to nap the thief red handed. And then thing get complicated for them. They may have failed to find the intruder, but they did find another victim. However, Frank Ames, English Professor at Breckbridge, was less fortunate than Melissa: his throat was cut and the body stuffed inside a trashcan.

Oh, Murderer Mine has been widely pegged as the weakest of the three books and I agree, plot-wise, but (for me) it’s the same story as with Rex Stout. It's one of those rare series I read for the characters rather than a clever plotting and there were one or two supporting characters that played well off the main protagonists. There's deputy Humphrey, whom impressed me as a deliberate, overdrawn parody of the stereotypical dumb, aggressive police cops from the pulps – 'cause seeing Doan is enough to put him in irons and hurl accusations at him. Humphrey positively gloats and rubs his hands at the prospect of "a chance to peek" at Doan "in the gas chamber," which is about as friendly a gesture as scrawling "I Can Only Tolerate You For So Long" on a brochure for a funeral parlor and shoving it in a lovely decorated Valentine's envelope. A far more pleasant characters, and parody, emerges later on when one of suspects reveals himself as somewhat of a Great Detective working incognito. I liked this character and wished Davis had done more with them as rival detectives, alas, this was to be the last novel in the series.

There's a definite decline in quality here, but the weakness of Oh, Murderer Mine lay mainly in the overly complicated, twisted explanation that felt too heavy for the light, semi-hardboiled comedy mystery that preceded it – dragging the rest of the story down with it. The solution even revealed a complicated murder method for a death that was mentioned in the background of the story and could've easily been a short story (or epilogue) in itself. However, the rest is pretty much what you'd expect from a Carstairs and Doan mystery. The high point of that was the trail of destruction Carstairs left at the salon of Heloise, which reminded me of the subway riot caused by H.M. in Carter Dickson's A Graveyard to Let (1949). Recommended to fans only.
Geplaatst door TomCat on 6/19/2014