"The culprit must turn out to be a person who has played a more or less prominent part in the story—that is, a person with whom the reader is familiar and in whom he takes an interest."
- S.S. van Dine (Twenty Rules for Writing Detective Stories, 1928)

I came across an entry for An Old-Fashioned Mystery (1983) by Runa Fairleigh while thumbing through Robert Adey's Locked Room Mysteries (1991), a regular feeder line these days, and the publishing date in combination with the detectives being listed put the book (possibly) in the same category as Herbert Resnicow's excellent Alexander and Norma Gold series from the 1980s. 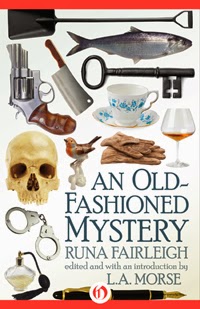 However, Sebastian and Violet Cornichon weren't the wisecracking, mystery solving husband-and-wife team I expected to find, but a brother and sister who exchange snappy remarks. Oh, and they're twins. Sebastian was born four minutes before Violet and therefore inherited everything, which now finances his lavish and loose lifestyle, and cultivated a penchant for making remarks/jokes that could be argued suffer from bad timing. In defense of my favorite character from the book, and to quote comedian Doug Stanhope, "they just died, it's perfectly timed." On the other hand, Violet had to work hard on her cosmetic line and earned the moniker of Society-Girl Detective by helping the police close one or two open cases – which proved to be the best kind of advertisement for her business money can't buy.

But first things first, because if I have to start anywhere, it's with the introduction, entitled "The Mystery Runa Fairleigh," written by crime novelist L.A. Morse, on the manuscript of An Old-Fashioned Mystery and the questions left behind by its author. Thee decades before, Fairleigh purchased one of the smaller of the Thousand Islands, somewhere near the border between the United States and Canada, where she lived the solitary existence of a hermit before disappearing from the face of the Earth – leaving only 288 pages of a type written manuscript behind. Morse ends the introduction with the following observation: "However, it might equally well have been titled The Last Mystery, since it is most definitely the mystery to end all mysteries. Indeed, it may be the eschatology of the mystery." Well, that's a case to be decided by the individual reader, but it's without a doubt one of the most flattering homage’s to Agatha Christie I have read to date.

The first and obvious inspiration for An Old-Fashioned Mystery was And Then There Were None (1939) and the backdrop is an old, gothic-style manor house, complete with battlements, on the isolated Komondor Island. It's a place with a chequered history: a cursed place where rumors of buried treasure from the Revolutionary War linger on and people continue to die under mysterious or absurd circumstances. A previous owner and notorious prankster was shot in the face when he sneaked up on someone who was fooling around with a shotgun. Komondor Island is the place Rosa "Mousey" Sill has picked to celebrate her 25th birthday and gaining full control of her trust fund, but the party that has been put together couldn't have ended any other way than in bloodshed.

First of the unlikely table companions is Mrs. Cassandra Argus, Mousey's deranged godmother and involved in the boating accident that killed her mother, which took a toll on her mental conditions and now shrieks eerie sounding prophecies. Beatrice "Budgie" Dijon is Mousey's aunt and the wife of the insufferable Colonel Nigel Dijon, who seems obsessed with smacking people and actually shocked to find out the cook, Mr. Ching, is an "Oriental." You have to be pretty racist, if that is your first complaint considering the quality of Mr. Ching's cooking. Derrick Costain is Mousey's well-dressed fiancé and rumored gold digger. Mr. Eustace Drupe is the dome-headed lawyer and trustee of Mousey's funds, but, since this is a detective story, Drupe is one of those "Wicked Uncle Andre" types. Cerise Redford and the housekeeper, Mrs. Hook, round out the party and they mix, socially, as well as soccer fans of opposing teams and beer. 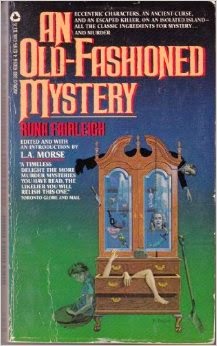 Fortunately, they soon stumble over the first body in the coal pile and it's been neatly chopped up, and from here on out the plot is compartmentalized in murder blocks: a murder is committed and Viola thinks she has pieced together the solution only to be upset by another murder. The (false) solution that tied together the first three murders can easily stand on its own (great clueing) and the case Violet made against her own brother was simply amusing – an (unconscious) spoof of the case against Roger Sheringham from Anthony Berkeley's Jumping Jenny (1933)? I surely got the impression Morse Fairleigh knew her classics. By the way, Drupe was killed in a locked room, but Violet completely forgot about the impossible angle until the story was nearing its end and the explanation was perhaps the only part of the story that should've stayed in the past (somewhere around the mid-to late 1800s).

This compartmentalized story telling helped in keeping the insanity in proper bounds, until the end, because the mounting terror of being picked off one-by-one wasn't enough. There had to be a radio broadcast on the only station they could receive, Big Band Era station, announcing a mass murderer had escaped from a high security prison – and he's familiar with the island. On a side note: I suspect Kanari Yozaburo from lifting bits and pieces of the plot for The Legend of Lake Hiren (1994) and given his own interpretation to other aspects of the plot, which wouldn't be the first time. The Mummy's Curse (1993) is basically an abridged version of Soji Shimada’s The Tokyo Zodiac Murders (1981). I know the line between emulation and copyright infringement can be sketchy at times, but Yozaburo walked that line as if it was the Silk Road during its heyday. Picking up ingredients here and there when it was time to hand in a new manuscript. But I'm getting off-topic here and long-winded.

I'm not sure what I liked more about An Old-Fashioned Mystery: the story or the solution. The former has a lot of interesting detective work and a galore of red herrings for genre savvy readers to slip on. I had solutions based on The Murder of Roger Ackroyd (1926), Death on the Nile (1937) and After the Funeral (1953), but the actual explanation is something else. Originality is a bit of an overused cliché when reviewing books, but here you might actually have something that's original and you could even argue "transcends" the genre. Some will love it (I think I do), while others will probably hate it and call shenanigans, but it was fairly clued – though I can definitely see why some would label it a rule breaker. But if it's a rule breaker, it's a classic of its kind. A great play on playing with the readers' expectations. And appreciated the cameo of a famous mystery writer in the final chapter.

I would recommend An Old-Fashioned Mystery the strongest to devotees of Agatha Christie and people who have read altogether too many mysteries. They'll probably appreciate the book the most!

Let the reader be warned: the book contains a few puns and word jokes. No idea why everyone hates them. And to readers new to Golden Age detectives and neo-classical mysteries: never, ever take Van Dine's rules too seriously.
Geplaatst door TomCat on 6/13/2014