A Union of Rivals

"Such will be a great lesson of peace, teaching men that what they can not take by an election neither can they take it by a war; teaching all the folly of being the beginners of a war."
- Abraham Lincoln (Fourth of July Address to Congress, 1861)

Jimmy Hale is one of the star reporters on the payroll of the New York Eagle and his involvement in a string of bizarre murders begins when the staff is ready to put the paper to be bed for the day. The untidy and grimy room fills with subdued chatter and banter, once the typewriters came to a grinding halt, and the conversation turns to an old friend of Hale – an eminent scientist, Professor Herman Brierly, who shuns publicity because of his contribution in several remarkable criminal cases. Brierly is close to eighty years old and a specialist in a variety of subjects, but Hale was the person responsible for putting on him on a path of crime.

The editor of the city newspaper, "Iron Man" Hite, overhears Hale's crack-up of his friend and decides his upcoming holiday should be on expense of the paper to visit Brierly, who's staying up in Canada, and enjoy some pints of beer outside of one of the dimly let, smoky speakeasies in New York. Oh, and there's a reunion at the retreat of Justice Isaac Higginbotham of fourteen Civil War veterans. They are the last members of a group of two hundred and thirty seven. Confederate and a few Union soldiers. This group is held together and gathers every Fourth of July by a Tontine insurance policy, giving the last surviving members the pot, and after more than sixty years that amounts to several million dollars. 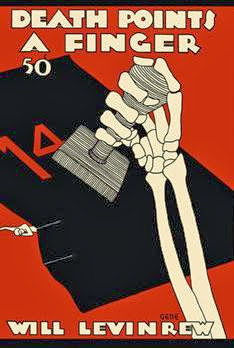 And thus begins Death Points a Finger (1933) by Will Levinrew, another mystery writer too obscure for his own page on the GADWiki, but I have to start off by saying how similar the set-up of the plot is to Ellery Queen's "The Gettysburg Bugle," collected in Calendar of Crime (1953), in which three Civil War veterans have a yearly ritual at Memorial Day and a last-survivor-takes-all scheme of themselves. The whole Tontine insurance/last survivor policy is also at the heart of another story, "The Inner Circle," from the very same collection of stories and would again be refurbished in "The Last Man Club" from The Adventure of the Murdered Moths and Other Radio Plays (2005). I think I can safely sate that Death Points a Finger is interesting reading material for Ellery Queen fans, because Levinrew may've played his part in shaping those stories.

The rough background sketch of the surviving Civil War veterans is brief, but interesting, concentrating on some of the blackest pages from the war, when brothers were fighting each other on opposite sites, but their story is also one of betrayal – and they've been receiving papers with the number fourteen printed on it every time someone from the group passed away. And the number of suspicious suicides and accidental deaths has been on an alarming rise among members of the group. Just before Hale arrived, they received news of three new deaths!

Morris Miller was found dead with a bullet in his head on the couch in his bedroom, a revolver had fallen from his limp hand, but the door and the windows were locked from the inside and the burglar alarm had not been aroused. Professor Brierly does not waste time in busting open this part of the case and sort-of makes Stonewall Rountree, from Jesse Carmack's The Tell-Tale Clock Mystery (1937), on the slow side with solving his seemingly impossible murder case on the Fourth of July. But Brierly is more a grumpy old man immersed in his hobby and lets out a snarl every now and then. Not at all the arrogant borderline sociopath sleuth John from Pretty Sinister Books promised in his review of Murder from the Grave (1930). Arrogant... absolutely, but not to the extent described in that review. However, the best solution would've been if Hale had revealed Briery as the brain behind the plot and explain his fantastic deductions as perpetrator knowledge in a grand play on the narrator-did-it ploy. Brierly had the age to be the elusive Amos Brown.

Death Points a Finger noticeably looses momentum in the second half as the Civil War elements are phased to the background and the plot concentrates on investigating the several deaths, traveling between the States and Canada, and even more murders follow! Levinrew even throws in a bomb for good measure killing not only its intended target, but also several service men assigned as bodyguards. The food theme mentioned in the review of Murder from the Grave is present here, as well, as they arrest a hungry burglar whose modus operandi was used as part of the locked room trick and it's a round-a-bout way to use a simple trick, but there's a rather clever reason for it. A completely new motive (for me) to justify all that work to create the illusion of the locked room and the cover of suicide is just the surface. But the second half felt a bit under whelming compared to the grander stage of the opening act, but, as a whole, a fairly competent second stringer and the snippets of the newspaper business were fun. The trail of obscurity is getting brighter!