Say It With Blood

"So many murders! Rather hard to do a lot of murders and get away with it, eh?"
- Luke Fitzwilliam (Agatha Christie's Murder is Easy, 1939)

Lucy Beatrice Malleson left behind a literary portfolio, mainly under the penname "Anthony Gilbert," stuffed with crime novels often floating in the gray, misty borderland between suspense and mystery. I find them fascinating to read, even if they sometimes lacked that final, illuminating touch of a truly brilliant detective story, but Death Knocks Three Times (1949) goes a long way in that direction. 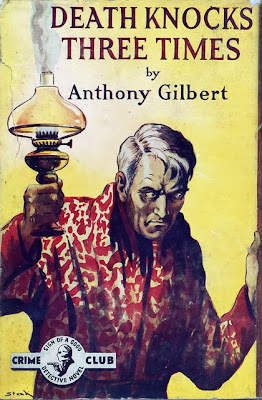 The starting point of Death Knocks Three Times is ornamented with the original set pieces, painted in shades of black and white, of the cliched image of the detective story, in which the sleuth of the piece arrives soaked from a cloudburst at a decaying mansion – where the specter of death stalks the musty corridors. Enter Arthur Crook, a notable criminal-lawyer and the British answer to Perry Mason, who seeks refuge at the home of the eccentric Colonel Sherren before the weather strands him in the countryside. The residence of the Colonel is indeed a mansion with hallways stretching into the dark unknown, but the place only gives a home to two people and the conveniences the house offers them are the same as when it was built. It still beats being stuck in a flooding and Crook goes on his way the next morning, however, this divergence from the norm doesn't mean the end of his involvement with the Colonel and his relatives.

After his return to London, Crook is summoned back to attend an inquest and hears the Colonel has broken his neck after the lid of the ancient bathtub came crashing down. The Colonel had received a visit from his nephew, John Sherren, a novelist of meager fame, but a motive seems to be lacking as the money passes to Colonel's servant, Bligh, and a slightly divided jury settles on a verdict of death by misadventure. Interestingly, one of John's two remaining relatives, aunt Isabel Bond, falls from a balcony one night after visiting her! And there was only one.

Aunt Clara is a stronger and far more independent minded woman than her late sister, Isabel, but the influx of threatening, hand-delivered letters and the arrival of her nephew, John, has her reaching for the help of a friend with an amateur-expertise in crime, Miss Frances Pettigrew. Connoisseurs in Crime, who, without saying, know their classics, will be tempted to draw a comparison with the name Francis Pettigrew, the lawyer-detective introduced in Cyril Hare's Tragedy at Law (1942), but her physical description is a grotesque parody of Mrs. Bradley with the behavior of a haggard Miss Marple. John first catches a glimpse of Miss Pettigrew in a bookstore where she's giving a standing lecture on murder, "naturally murder is simple, with weapons on all sides," and plotting detective stories, "why writers of detective stories have to employ mysterious poisons or sealed rooms or blowpipes... when bricks, bread-knives, coal-hammers and pairs of scissors are to be had for the asking and are at least as efficacious." And I gravely suspect Gilbert of sniping at Agatha Christie's Murder is Easy (1939) when John found himself locked up with Miss Pettigrew in a non-smoking compartment for the duration of the journey, which was similar to how Luke Fitzwilliam was (socially) chained on his train ride to Miss Fullerton, who suspected a mass-murderer was active in her home village of Wychwood.

Even the scarlet beetle, Mr. Crook, crawling back into the picture can't prevent the case from becoming increasingly complicated with the arrival of a blackmailer into the picture and more letters – climaxing with a death by poisoning at a very curious hotel resort. I think, once again, Gilbert was subtly poking fun at one of her fellow mystery writers. The death takes place in a locked hotel room and the maid said that she raised enough noise "to wake the dead." You do the math. By the way, this is not a locked room mystery in any shape or form. It would not have mattered to the outcome whether the doors were locked or not. This one should not have been in Adey's bibliography of the locked room mystery.

On the other hand, the identity of the murderer is inventive, even if the seasoned mystery reader won't have too much problem foreseeing the twist, but the way I stumbled to it is something (read: bizarre coincidence) I'm going to blame on the bogeyman of the mystery-sphere and that's all I can say without spoiling the solution. The solution, and ideas surrounding it, anticipate and foreshadow a rather interesting Agatha Christie novel, but, again, I can't go into details without spoiling even more detective stories.

Lets end with saying that Death Knocks Three Times, alongside Something Nasty in the Woodshed (1942), is the best and most rewarding Arthur Crook mystery I have read to date.
Geplaatst door TomCat on 11/24/2013